Mo Brooks Lashes Out After Rescinded Endorsement, Says Trump Asked Him to Hold ‘New Special Election for the Presidency’ After 2020 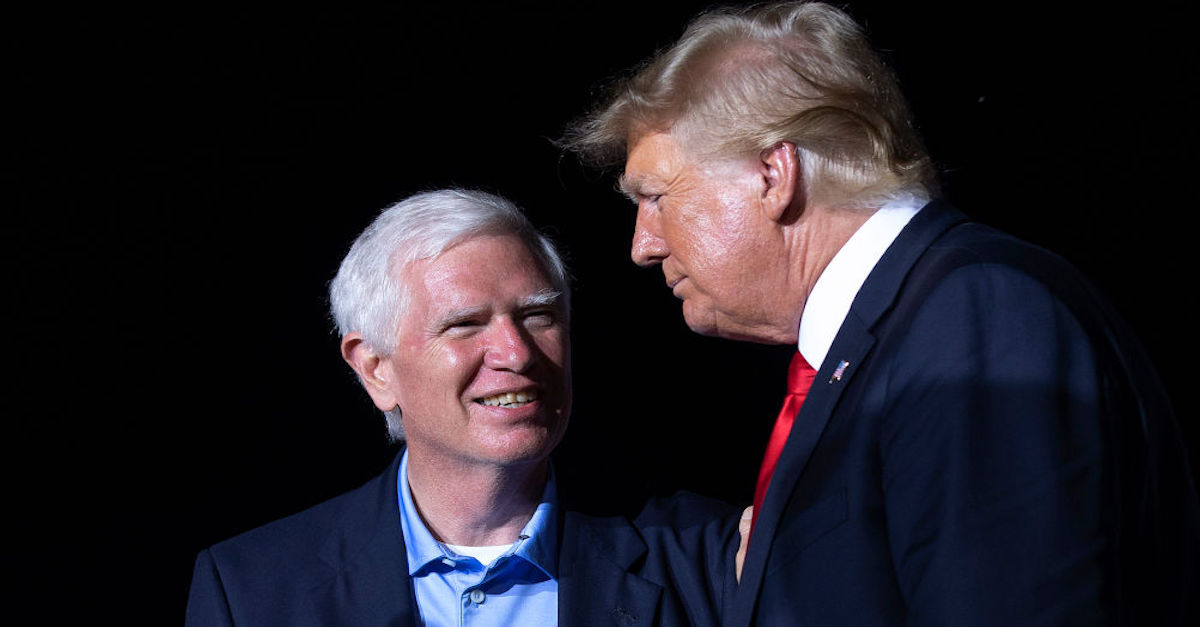 Former U.S. President Donald Trump (R) welcomes candidate for U.S. Senate and U.S. Rep. Mo Brooks (R-Ala.) to the stage during a “Save America” rally at York Family Farms on August 21, 2021 in Cullman, Ala. (Photo by Chip Somodevilla/Getty Images.)

Rep. Mo Brooks (R-Ala.), one of Donald Trump’s staunchest allies, says that the former president planned on holding a “special election” to reinstall himself as president despite being told that it was illegal.

The statement came just hours after Trump withdrew his endorsement of Brooks, who is running for Senate in Alabama. Trump issued a statement Wednesday declaring that Brooks “went ‘woke'” by urging the crowd at a rally—which Trump attended—last August to “put [the 2020 election] behind you” and focus on the 2022 and 2024 elections.

“When I heard his statement I said, “Mo, you just blew the Election, and there’s nothing you can do about it.” Very sad but, since he decided to go in another direction, so have I, and I am hereby withdrawing my Endorsement of Mo Brooks for the Senate.

The public political breakup is a sharp turn away from Trump for Brooks, who has been a stalwart supporter of the former president. Brooks spoke at Trump’s so-called “Stop the Steal” rally that preceded the Capitol attack, and later said that while he wasn’t involved in its planning, he would have been “proud” if his staff had helped organize the rally.

Brooks was also a defendant in the civil lawsuit brought by Rep. Eric Swalwell (D-Calif.), who accused Brooks, along with Trump, Donald Trump Jr., and Rudy Giuliani of being among those who incited Trump supporters to storm the Capitol building on Jan. 6 in an effort to block Congress from certifying Joe Biden’s win in the 2020 presidential election.

U.S. District Judge Amit Mehta, a Barack Obama appointee, denied Brooks’ claim of immunity but agreed to dismiss the claim against him on First Amendment grounds.

Brooks is currently locked in a three-way battle against Katie Britt and Mike Durant for the Senate seat currently held by Richard Shelby, a Republican who announced his retirement last year. According to a Politico report, Trump has met separately with Britt, a former Shelby aide, and Durant, a retired Army pilot.

It’s disappointing that, just like in 2017, President Trump lets Mitch McConnell manipulate him again. Every single negative TV ad against our campaign has come from McConnell and his allies. I wish President Trump wouldn’t fall for McConnell’s ploys, but, once again, he has.

I have not changed. I am the only proven America First candidate in this Senate race. I am the only candidate who fought voter fraud and election theft when it counted, between November 3 and January 6.

I repeat what has prompted President Trump’s ire. The only legal way America can prevent 2020’s election debacle is for patriotic Americans to focus on and win the 2022 and 2024 elections so that we have the power to enact laws that give us honest and accurate elections.

I’ve told President Trump the truth knowing full well that it might cause President Trump to rescind his endorsement. But I took a sworn oath to defend and protect the U.S. Constitution. I honor my oath. That is the way I am. I break my sworn oath for no man.

There’s only one conservative option in this race, and I am confident that the people of Alabama will see that on Election Day.

Mo Brooks of Alabama made a horrible mistake recently when he went “woke” and stated, referring to the 2020 Presidential Election Scam, “Put that behind you, put that behind you,” despite the fact that the Election was rife with fraud and irregularities. If we forget, the Radical Left Democrats will continue to Cheat and Steal Elections. Just look at what is happening in Wisconsin, Arizona, Pennsylvania, Georgia, and elsewhere, but tremendous progress has been made that will help us in 2022 and 2014. The 2020 Election was rigged, and we can’t let them get away with it.

When I endorsed Mo Brooks, he took a 44-point lead and was unstoppable. He then hired a new campaign staff who “brilliantly” convinced him to “stop talking about the 2020 Election.” He listened to them. Then, according to the polls, Mo’s 44-point lead totally evaporated all based on his “2020” statement made at our massive rally in Cullman, Alabama. When I heard his statement I said, “Mo, you just blew the Election, and there’s nothing you can do about it.” Very sad but, since he decided to go in another direction, so have I, and I am hereby withdrawing my Endorsement of Mo Brooks for the Senate. I don’t think the great people of Alabama will disagree with me. Election Fraud must be captured and Stopped, or we won’t have a Country anymore. I will be making a new Endorsement in the near future!