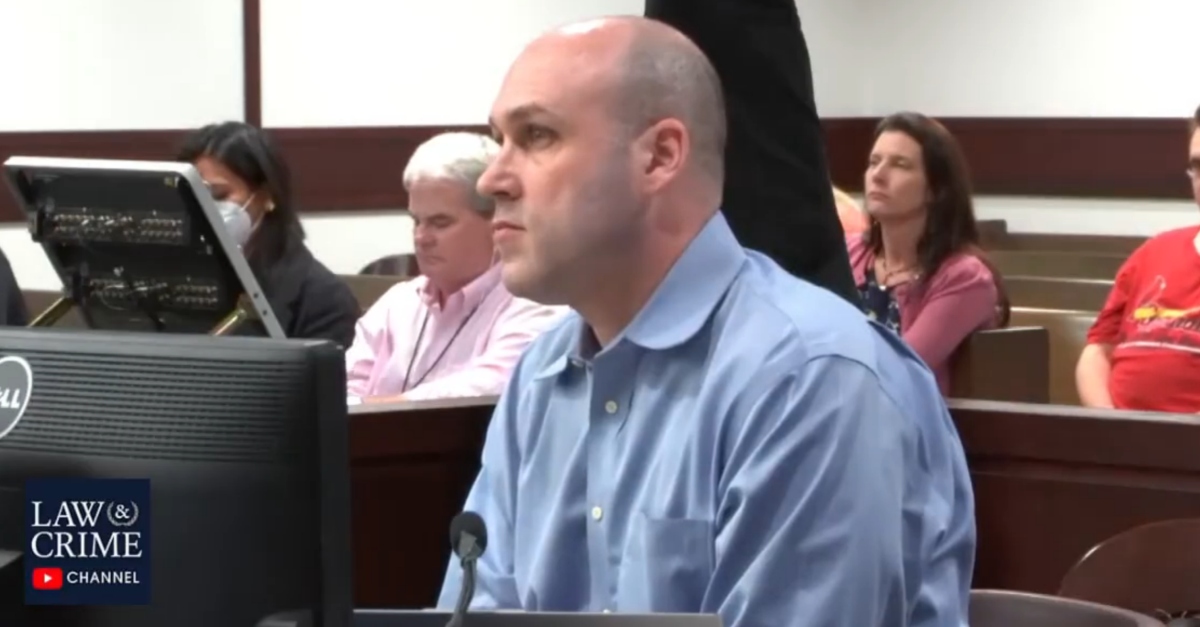 Trevor Steven Summers and Alisa Mathewson (behind him, on right, in pink) watching their daughter Arden Summers testify.

A man charged with kidnapping, sexually assaulting, and trying to kill his ex-wife used his elder daughter to help him sneak into the residence, according to the daughter’s trial testimony on Wednesday.

Trevor Steven Summers, 45, had ostensibly wanted to make sure everyone at the home was asleep, but according to testimony from his daughter Arden Summers, then 14, he had her snoop through her mother Alisa Mathewson‘s purse to see if there were any birth control pills.

Arden said during direct examination that her father convinced her to leave the window open in a children’s bedroom so he could sneak in on the morning of March 11, 2017. He allegedly told her he wanted to speak to her mother about legal matters. The former couple, who have five children together, had been living separately going and through a divorce at the time.

Arden acknowledged being upset at her mother during this period because because Mathewson had moved on to dating her now-husband Jeff Mathewson. Arden testified that she and her father originally considered carrying out the window plan several days before, but she got taken home after getting into an argument about Summers. Arden acknowledged being protective of him at the time.

A lot has changed in five years. Arden remained apparently respectful in tone as her father, who is representing himself, cross-examined her, but she spoke bitterly about him during the lead up to the case.

“This was a man I trusted,” daughter Arden has previously said, according to Fox 13 News. “This is a man who I thought could do no wrong and just to know that he used me to do what he wanted to do hurts more than anything.”

Summers also brought his son Landen, then 12, in on his plan to sneak into Mathewson’s home, according to Arden. Arden said her brother was also unhappy about her mother dating.

In the time leading up to the kidnapping, Summers communicated with Arden and Landen in a group chat, she testified. Arden said he told her to name him as “Taylor” in the phone in case her mother looked through the device. Arden said she had two phones: one from her mother and the other from her father.

Defendant Summers also allegedly asked Arden if her mother used a password or thumbprint on her personal phone. Prosecutors say that during the attack, he tried to use Mathewson’s thumb to try to unlock her phone.

“Did you notice if mom had a passcode on her phone or a thumbprint?” #TrevorSummers asks his daughter. She tells him she uses a thumbprint. Earlier Alisa testified that when her hands were tied up, Summers took her phone and put it to her thumb to get it to unlock. pic.twitter.com/MMhPLG0lcr

The night of March 10, 2017, Mathewson watched a movie at her home with Arden and two younger children Bryn and Grady. In the time leading up to the incident, they discussed the possibility of Mathewson’s new boyfriend possibly being there.

“Make sure she’s not video chatting and introducing them to that guy,” Summers allegedly said in a text read by the prosecution.

He also allegedly told his daughter to look through her mother’s purse for birth control pills.

“Did she leave her purse out,” Summers allegedly wrote. “Any pills in there?

“Well have a look if you can,” Summers allegedly said.

“Okay,” Arden wrote, later adding there was only Alka-Seltzer.

“Ok,” he  allegedly wrote, later adding: “Any receipts for prescriptions or birth control?”

“Not that I see,” Arden wrote.

According to Arden’s testimony, her father arrived late at night in a vehicle with Landen and younger brother Cooper, then 3. She waited in the vehicle, a Chrysler Pacifica, while her father went inside, she said.

Arden says she opened the kids’ window, crawled out, passed her dad walking and waited in car w/Landon.

Mathewson had testified that Summers ambushed her in bed at 3 a.m. on March 11, 2017 as she was sleeping in bed with Grady and Bryn.

Bryn, then 8 and now 13, testified on Wednesday to waking up to her mother yelling at her father. She said she did not remember what her mom said, but during cross-examination, she said her mother sounded worried or scared. Arden said she, Landen, and Cooper remained in their father’s vehicle.

5:03am Arden texts her dad, “Are you almost done?”#TrevorSummers responds, “Yes, stay in the car”

Arden went inside to get her little brother/sister.

According to the testimony, defendant Summers had all five of his children drive alone to his home. Arden took the wheel. Though the eldest child, she was not even old enough for a Florida learner’s permit, let alone a driver’s license, at the time.

6:03am – “You doing ok driving? Nice and slow.” – #TrevorSummers
Arden testifies her dad asked her to drive back to his house because Cooper may wake up soon and he still needed to talk to their mom.

Mathewson testified that Summers sexually assaulted her after the children left. During cross-examination, she and he often used the word “sex” to describe the incident, but she pointed out that he had previously pushed her, held her down, tied her up, attacked her, and broke into her home while she was sleeping.

During her cross-examination, Arden said she did not remember her parents physically fighting. Her father also asked questions about Mathewson’s current husband. Assistant State Attorney Jennifer Johnson successfully objected on grounds of relevance regarding a firearms-related question.

Defendant Summers previously made much ado about scarves he allegedly possessed during the incident, questioning his ex about how she could remember the colors if it was so dark in the home.

“I know that they are those colors because you used them to tie me up after the struggle, so I know what colors they were,” Mathewson said.

“It’s good to see you,” defendant Summers told Bryn at the end of cross-examination.