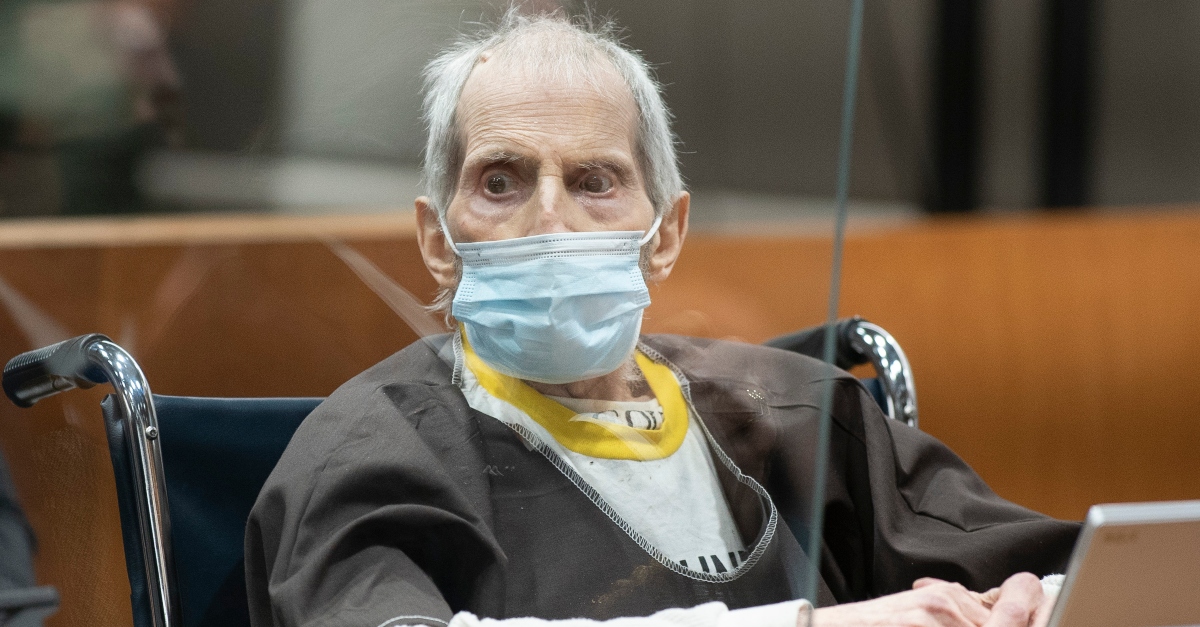 An elderly convicted murderer lies in a California bed with a serious illness as prosecutors on the other side of the country are reportedly seeking more charges against him. The grand jury against real estate heir Robert Durst, 78, has convened in Westchester County, New York, according to News 12 reporter Tara Rosenblum. Meanwhile, Durst is hospitalized on a ventilator and in “very bad condition” from COVID-19, his attorney Dick DeGuerin has said.

BREAKING – The grand jury against #RobertDurst in NY has begun. I can confirm prosecutors in Westchester have started presenting their case to jurors, including testimony from key witnesses. This as Durst battles Covid-19 on a ventilator in LA @News12WC

Westchester County District Attorney Mimi Rocah (D) had planned to convene a grand jury in connection to the disappearance and death of Kathleen McCormack Durst, 29, Robert Durst’s then-wife who disappeared in 1982, according to sources cited by News 12 Westchester in an Oct. 8 report. Subpoenas were reportedly went out, and a grand jury empaneling was said to be imminent. A source confirmed Rocah’s grand jury plans, said The New York Daily News at the time.

Sources did not appear to specify charges in these reports. The Westchester County District Attorney’s Office declined to comment to Law&Crime.

For Durst, a New York criminal case would rub salt in the wound after prosecutors in Los Angeles County, California convinced jurors he killed friend Susan Berman, 55, execution-style in her Beverly Hills home in 2000. Authorities said it was part of a decades long trail of bloodshed. He recruited Berman in 1982 to cover up his wife’s disappearance. Berman, a loyal friend whose father was a mobster, called the dean of Kathie’s medical school, and called out sick while pretending to be the missing woman, according to testimony.

Years later, in 2000, then-Westchester County District Attorney Jeanine Pirro reopened the case into Kathie’s disappearance. Robert Durst, concerned Berman might talk to authorities, shot his close friend in the back of the head, prosecutors said. He mailed an enigmatic note leading cops to the body.

Durst then fled to Texas, where he pretended to be a mute woman and was the neighbor of a man named Morris Black, 71. Durst killed Black and dismembered his body, with investigators never finding the victim’s head. Durst insisted in testimony at his Texas trial that he killed Black in self-defense (Los Angeles prosecutors said Durst killed Black because the victim figured out who Durst was). Texas jurors ultimately acquitted Durst of killing Black, but they convicted him for dismembering the victim’s body.

Just last Thursday, Durst was sentenced to life in prison without parole for killing Berman. The announcement about his COVID-19 diagnosis arrived on Saturday.

DeGuerin voiced concern about Durst’s condition in court and the possible COVID-19 exposure to others.

“I can confirm that we were notified that Mr. Durst has tested positive for Covid,” he told Law&Crime in an email on Saturday. “Also, I was very concerned about his condition on Thursday in court. He had difficulty breathing and speaking and looked worse than I’ve ever seen him. His condition has steadily deteriorated during the trial, as our medical consultant predicted. I’m also concerned for anyone who came in contact with him Thursday, particularly the defense team and court personnel.”

Durst’s defense in the L.A. trial unsuccessfully tried to postpone the case over a cancer diagnosis.

David Chesnoff, DeGuerin’s co-counsel, declined to comment to Law&Crime when we reached out about the initial reporting from News 12 and the Daily News.

“I don’t respond to rumors,” he told us on the phone.

He and DeGuerin did not immediately respond to a Law&Crime request for comment about Durst’s current condition and the new grand jury reporting.

On the day of Durst’s conviction in Berman’s murder, Kathie Durst’s family urged the Westchester County DA’s Office to “do the right thing” and bring charges. Kathie Durst was declared legally dead in 2017.

Matt Naham and Aaron Keller contributed to this report.