‘When Will All This Stop?’: Family of Murder Victims Plead with Court to Uphold Admitted Killer’s Conviction 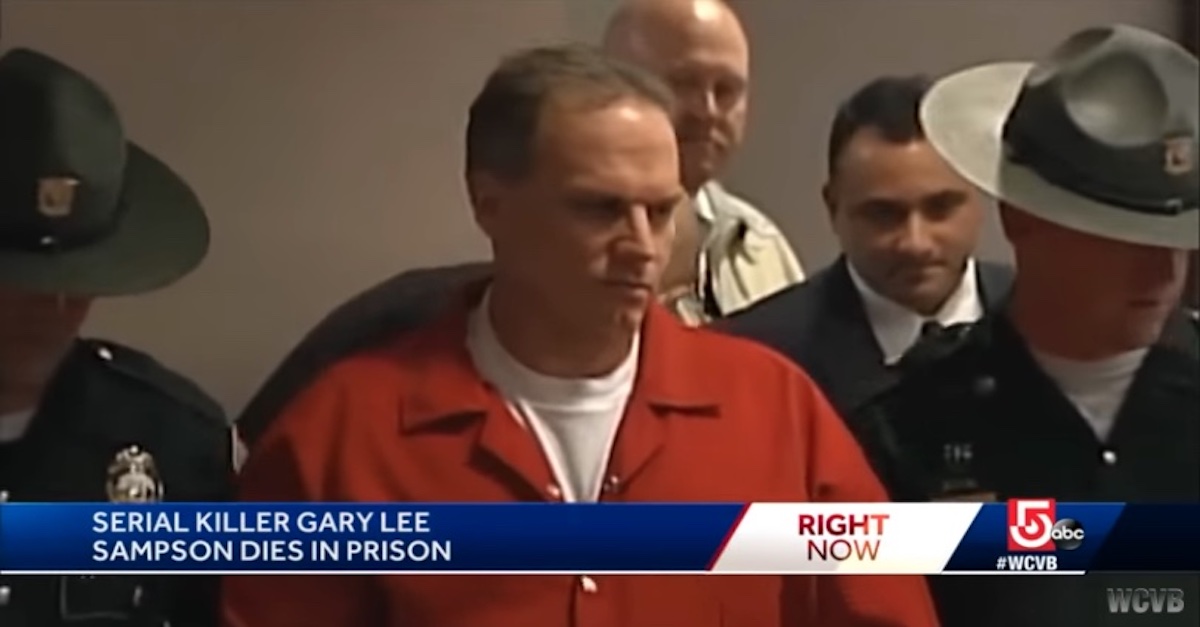 Family members of the victims of a mass murderer who died in prison have written letters begging the U.S. Circuit Court of Appeals for the First Circuit not to overturn the killer’s conviction.

Gary Lee Sampson died in prison in December. He had been sentenced to death after pleading guilty in 2003 for the 2001 murders of Philip McCloskey, 69, and Jonathan Rizzo, 19, in Massachusetts.

According to a summary of the murders in the Boston Globe, McCloskey was killed after picking up Sampson, who was hitchhiking, in Abington on July 24, 2001. Sampson had forced McCloskey to drive Marshfield, where he walked McCloskey into the woods, tied him up, and stabbed him 24 times, the Globe reported. McCloskey was a retired gas company worker and a father of six.

Three days later, Sampson was hitchhiking in Plymouth. Rizzo, a college student, picked him up. Sampson forced Rizzo to drive to Abington, where he tied him to a tree in the woods and stabbed him repeatedly. Sampson then drove Rizzo’s car to New Hampshire, where he broke into a vacation home. When Robert Whitney, 59, showed up at the home to mow the lawn, Sampson killed him.

Sampson pleaded guilty to a state murder charge for Whitney’s death and was sentenced to life without parole.

Sampson’s 2003 verdict for the murders of Rizzo and McCloskey was overturned because a juror lied during jury selection. In 2017, a jury found that Sampson should be sentenced to death for killing Rizzo, but was unable to unanimously agree as to the sentence for McCloskey’s death. The judge sentenced Sampson to death for Rizzo’s slaying, and to life without parole for McCloskey’s murder, according to the Globe report.

The First Circuit is now apparently considering vacating Sampson’s conviction, even though he was appealing only his sentence.

In a Jan. 7 order, the appellate court said that Sampson’s lawyers have filed a “Suggestion of Death,” advising the court of Sampson’s death.

“The government shall respond to the Suggestion of Death within 14 days of the date of this order and shall include a statement of its position on the effect of the defendant’s death on this appeal and the underlying convictions[,]” the court order said. Prosecutors have until Friday to respond.

Rizzo’s family members, however, have already made their thoughts on the matter clear.

“After the mental and physical pain inflicted on our family during the entire 20 years of legal proceedings including the initial trial, the appeals process, the vacating of Sampson’s initial death penalty sentence, the retrial and resentencing, and the subsequent appeal process, I take extreme umbrage and am outraged at your initiation of this request,” Mike Rizzo, Jonathan’s father, wrote in a letter to the court. “Finally, after hearing of Sampson’s recent death, we began to understand that we would not have to hear this degenerate’s name again and could begin to move on. Now we must deal with you insulting us by intimating that his heinous acts could be removed from the record.”

“I find your actions despicable and will fight them with considerable resolve by any means available to me,” Mike Rizzo added.

Mary Rizzo, Jonathan’s mother, expressed similar feelings in her letter to the court.

“When will all this stop? Gary Sampson tortured and murdered three innocent people, one of them being my precious son, Jonathan Rizzo,” she wrote, nothing that Sampson’s “bragging confession” of killing her son will “forever haunt” her.

“For countless trials and appeals we stood with dignity and now it feels like you are taking away another piece of us,” she also wrote.

“There are not many thing we know to be certain in this world, but here is one: death. We all die,” he began his letter, later adding: “Of course you are aware that death came for my brother in a most painful way, for him and us.”

After reminding the court of defense expert testimony that said Jonathan Rizzo “felt no pain when being murdered because there are nerve endings in the skin and not in the organs,” Nick Rizzo made a somewhat more existential appeal to the judges’ consciences.

“Here’s another though, moving back to my first point: if we know that death comes for all, we have to assume that death will come to the Honorable Judges of the First Circuit Court of Appeals. And when that day comes, I think there are some important questions that will have to be answered. Are you ready to be a person who, in dogmatic adherence to precedent or the law, tried to erase the record of a dead man who murdered three innocent people, admitted it, and then bragged about it? While you may be able to defend this position to your colleagues (surely equally dedicated to the law), are you ready to defend this position to your grandchildren?”

“We ask that you take this opportunity to stop willfully victimizing our family,” he added.

The issue of how to handle the death of a convicted killer who dies while appealing at least part of his case is not new, and makes headlines when it happens in high-profile cases.

In 2003, prosecutors didn’t contest the Massachusetts Appeals Court decision to erase the child rape conviction of former priest John Geoghan, who was murdered in prison while the appeal of his sentence was pending. At the time, prosecutors said vacating convictions in such situations was a long-standing routine historical practice.

By 2019, however, things in Massachusetts appeared to have changed. That year, the Massachusetts Supreme Judicial Court reinstated the first-degree murder conviction of Aaron Hernandez, the New England Patriots tight end who died by suicide in prison while his appeal was pending. Hernandez was convicted in 2015 of murdering Odin Lloyd, a semi-professional football player.

After Hernandez’s death, Massachusetts’ highest court found that the rule allowing a conviction and sentence to be erased if the defendant dies while appealing their case was “outdated and no longer consonant with the circumstances of contemporary life.”

The recent death of convicted murderer Robert Durst has already resulted in the dismissal of a New York murder charge against him. In California, where Durst was convicted, legal experts say the law allows the state’s Courts of Appeal to dismiss Durst’s appeal and set aside his conviction.

For its part, the First Circuit cited two cases possibly relevant to Sampson’s case. In 2020, the Second Circuit dismissed as moot the appeal of a defendant who died while appealing only his sentence but not his conviction; however, in 1994, the D.C. Circuit stated a rule that the death of a criminal defendant during his appeal abates both the appeal and the conviction.

Prosecutors have until Friday to respond to to the court’s order; Sampson’s attorneys have seven days after that to file a reply.

Read the court’s order and the letters from Rizzo’s family, below.