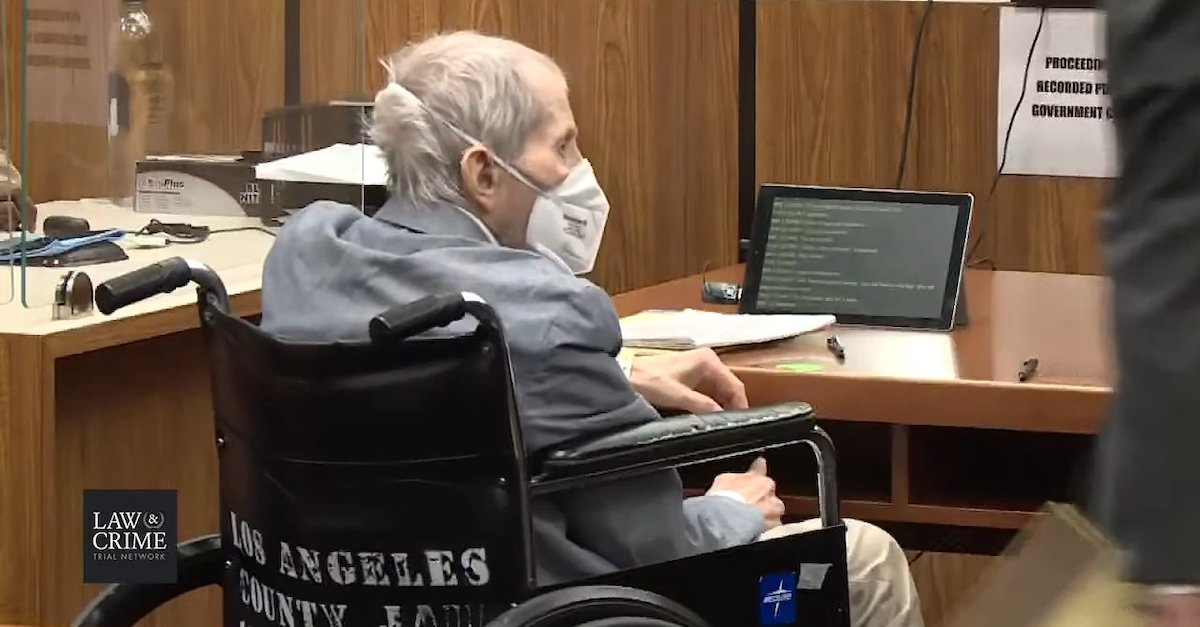 In back-to-back testimony on Thursday, accused murderer Robert Durst’s former next-door neighbors contradicted what he told detectives some four decades ago—that he went for drinks at their house after dropping his wife off at a train on the day she disappeared.

The Mayers lived next to Robert and his then-wife Kathie Durst, now presumed dead, on the day she went missing: Jan. 31, 1982.

Though Robert Durst’s murder trial is not about his wife’s death, California prosecutors have tried to convince a jury that he killed his former friend Susan Berman in 2000 to cover up what she knew about the disappearance. The state has called multiple witnesses about their suspicions of domestic abuse in the Durst household, a bucolic lakefront home in South Salem, New York. An emergency room doctor previously testified on Monday that Kathie Durst had a mysterious black eye roughly a month before she disappeared.

According to prosecutors, Mr. Durst recruited his neighbors into his alibi, but both of those erstwhile neighbors—then-married couple Ruth Mayer and Bill Mayer—took turns contradicting the claim the three of them had drinks that evening.

Ms. Mayer recounted seeing Kathie Durst in the morning on the day she disappeared, but she insists that she never saw her husband.

“Did you ever see Robert Durst that day on the 31st?” the prosecutor asked.

“Did Robert Durst ever come over to your house, while you were present, for drinks that day or that evening on Jan. 31 1982?”

Her former husband appeared equally certain that the claimed meeting did not happen.

Asked by Deputy District Attorney John Lewin about whether Mr. Durst’s claim to detectives was true, Mr. Mayer replied: “Not at all.”

“I’m absolutely sure,” he added.

Durst’s defense lawyer David Chesnoff took multiple tactics challenging the Mayers’ credibility. Ruth Mayer denied that she told a detective what was written in his notes.

“Did you take any notes back in 1982 with detective?” Chesnoff asked.

“No,” Ms. Mayer replied, giving the same answer when asked if she kept a diary.

“So you have no written record of what u said to police on that day?” Chesnoff pressed.

“I do not,” she acknowledged.

Chesnoff’s examination of her former husband was also contentious, with Durst’s lawyer stating that he agreed to speak to the prosecution but not the defense.

“That’s because you’ve kind of taken a side,” Chesnoff said.

“I’m not sure what you mean,” Mr. Meyer responded.

Described as a “creepy cottage” by the New York Post when it went up for sale in 2015, the Dursts’ former Westchester home had a list price for $1.1 million when the tabloid picked up on it hitting the market. Its proximity to a lake could theoretically help dispose of murder victims, but Bill Mayer did not find that a likely spot to dump Kathie Durst’s body.

#RobertDurst – Lewin asks if someone was trying to dump a body in this lake in late Jan, early Feb, would that be possible? Bill Mayer says that would be "extremely difficult". @LawCrimeNetwork pic.twitter.com/KYwEc5D67Q

The Mayers are not the only witnesses prosecutors called to reconstruct the 39-year-old events. Earlier this week, the state called Fadwa Najamy, the sister of Gilberte Najamy, the last woman to see Kathie Durst alive. Gilberte Najamy is no longer alive to tell that story herself, having died in 2015.

On Monday, Fadwa Najamy testified that Ms. Durst unexpectedly arrived at her sister’s house in Newtown, Connecticut, on Jan. 31, 1982, upset and “frantic” because she and her husband had a fight.

Thursday’s proceedings wrapped up in the early afternoon, but live trial coverage continues on Law&Crime, which was selected as the sole pool camera for the trial.