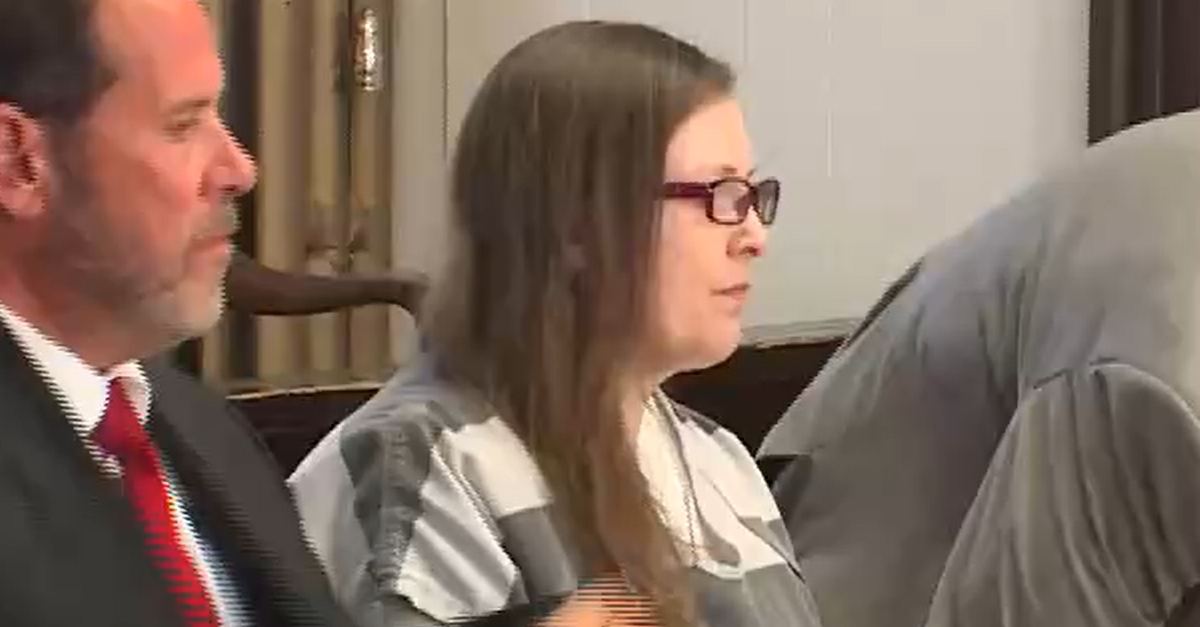 A grandmother admitted Friday to her role in the 2016 murders of eight members of another family over the custody of her granddaughter.

Angela Wagner, 50, pleaded guilty to several lesser charges, including conspiracy to commit aggravated murder, in the April 22, 2016 massacre of the Rhoden and Gilley families. Other charges included aggravated burglary with firearms specifications, unlawful possession of a dangerous ordnance, tampering with evidence, forgery, and unauthorized use of property.

Prosecutors have said Angela Wagner and her husband, George “Billy” Wagner and her two sons, Edward “Jake” Wagner and George Wagner IV, committed the crimes so the family could have sole custody of a little girl Jake Wagner had with Hanna Rhoden. Jake Wagner pleaded guilty on the fifth anniversary of the murders earlier this year.

Under a plea agreement, Angela Wagner would serve 30 years in prison in full and have to cooperate against other family members, including her husband and son.

Angela Wagner will get 30 years in prison as part of the agreement. She has to testify in the trials of her co-defendants. She has to serve the entire 30 years. Her co-defendants still going to trial are her husband, Billy Wagner, and son, George Wagner @LawCrimeNetwork

Jake Wagner admitted during a hearing that he and his family devised a plan to kill Hanna Rhoden and any member of her family that could stand in the way of Jake gaining full custody of the child who is now 7 years old. Jake Wagner sought full custody of the child days after the murders and was granted full custody in June 2016. The Wagners had denied involvement in the murders. But during the hearing, Jake Wagner apologized to the Rhoden family, and prosecutors said he led them to guns and a vehicle used to commit the murders. His guilty plea resulted in the death penalty being taken off the table for him and his family members. He also agreed to testify against his parents and brother.

Prosecutors said the plot to commit mass murder began in late 2015 when Angela Wagner hacked into Hanna Rhoden’s Facebook account and read a message from Hanna Rhoden to another person in which she discussed the Wagners wanting full custody of her daughter. Special prosecutor Angie Canepa said Hanna Rhoden wrote “they’ll have to kill me.” Canepa said Angela Wagner showed the message to Jake and the murder plot unfolded from there.

Investigators turned their attention to the Wagner family in the Spring of 2017. They descended upon a farm Jake and George had recently sold and searched the property along with the Flying W farm owned by Fredericka Wagner, Jake and George’s grandmother.

Angela Wagner brought into court in Pike County surrounded by officers wearing body armor. We’ve never seen someone brought out like this before in this case. @LawCrimeNetwork pic.twitter.com/2V55OCkaqM

Angela Wagner told Law&Crime’s Angenette Levy in a Facebook message in May 2017 that her family was being slandered and that they were innocent. The Wagners moved to Alaska in 2017. When the family moved to Alaska, they took Jake’s daughter and George’s young son with them. George also had sole custody of his son that he had with his ex-wife. Prosecutors have said the Wagners were “obsessed” with custody and control of children.

Court documents filed by prosecutors state Jake Wagner married a woman named Elizabeth while the family was living in Alaska and that he and other family members controlled her every move and threatened to kill her. Prosecutors wrote that the family became upset when Jake’s daughter referred to Elizabeth as “mom” because the child was supposed to call Angela Wagner “mom.”

The same documents, which outline prosecutors’ intent to use “other acts” evidence, state the Wagners got George’s first wife to sign away most of her custody rights to their son under false pretenses, controlled her movements and spied on her.

State agents traveled to Alaska and Montana to interview the family as the investigation continued. The Wagners moved back to Ohio in 2018. In November 2018, then Attorney General Mike DeWine announced a grand jury indicted the four Wagner family members for the murders.

The investigation has been called one of the largest in state history. On the morning of April 22, 2016, Bobbi Jo Manley, Dana Rhoden’s sister, went to Christopher Rhoden Sr.’s trailer to feed his dogs that morning and found Christopher and Gary’s bodies covered in blood in the trailer and called 911. Christopher had defensive wounds on his body, according to an autopsy report.

“There’s blood everywhere,” Manley said on the 911 call. Manley and her brother, James Manley, found five other members of their family shot. Frankie Rhoden and his fiancée, Hannah “Hazel” Gilley, were shot in the head in their bed. Their 6-month-old child was in the bed with them covered in blood. Frankie’s toddler son was covered in blood as well and answered the door when Bobbi Jo approached.

Fredericka Wagner, the family matriarch, was charged with lying to the grand jury and obstruction but the charges against her was later dropped. Prosecutors have indicated they plan to refile charges against Fredericka Wagner at a later date. Rita Newcomb, Angela Wagner’s mother, was charged with forgery and obstruction of justice.