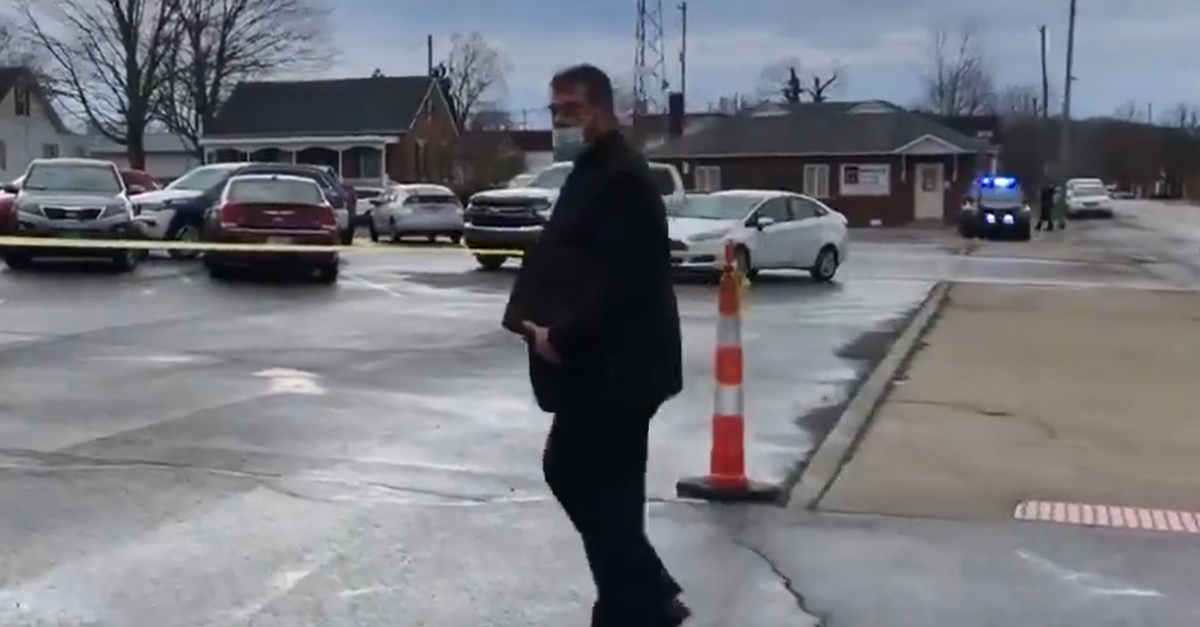 An Ohio sheriff best known for investigating a high-profile mass murder was sentenced on Wednesday for using his position to steal money seized in drug cases. He also surreptitiously bought a seized vehicle that his office put up for auction, then later sold it for $3,500 more than he spent to buy it.

Charlie Reader, 47, must spend a total of three years in prison.

The Law&Crime Network’s Angenette Levy was at court.

BREAKING: Former Pike Co. Sheriff Charlie Reader is sentenced to 3 years in prison for theft in office, tampering with evidence and conflict of interest. @LawCrimeNetwork

Reader was suspended as Pike County Sheriff in 2019 amid allegations that he stole seized drug money in order to fund a gambling debt. Reports indicate he lost thousands of dollars over three years at the El Dorado Scioto Downs casino and more than $700 in one day at the Hollywood Casino in Columbus, Ohio. He ended up pleading guilty to two counts of theft in office, two counts of tampering with evidence, and one count of conflict of interest. Prosecutors dropped the remaining 13 counts against him.

Heavy security at the Pike Co. Courthouse as former sheriff Charlie Reader will be sentenced for stealing money seized in drug ops to fund his gambling habit @LawCrimeNetwork pic.twitter.com/F4eCr9mWqw

Reader continued to deny that he used the stolen money for gambling, though the judge noted that according to the pre-sentence investigation, there was no documentation to show he had given money to charities.

Important to point out: Reader told investigators with the state auditor’s office that he started gambling more. @LawCrimeNetwork

Judge Cosgrove now questioning Reader and says it is noted in the pre-sentence investigation that Reader had no documentation that he spent the money on charitable orgs. She now questions him about losing $3K at the casino @LawCrimeNetwork

“I’m a good person who made bad decisions and choices,” Reader said while asking for probation. He wanted to be available to see his son go to college and his daughter get married. He said his father was very ill. Attorney Jim Boulger asked for a report date to prison because the defendant’s father was in the hospital. Judge Patricia Cosgrove said she would consider it if his father was on death’s door, but he was not.

“I’m here to take a accountability. I shed bad light on the office of sheriff.” – Charlie Reader. He starts to cry @LawCrimeNetwork pic.twitter.com/ALtSmUdP61

Some locals spoke on Reader’s behalf and described him in glowing terms.

Rev. Whitley speaking on behalf of Charlie Reader. “During his tenure it was common to see Charlie or one of the officers drive through our community. He went through one of the most horrendous crimes” (Rhoden case.) @LawCrimeNetwork pic.twitter.com/06ihCSVLQi

Resident Pamela Shelpman says there is no greater man than Charlie Reader. She said her son died in a fire and Reader carried him out like he was taking him to the hospital. “I didn’t know a sheriff could do that.” @LawCrimeNetwork pic.twitter.com/ZNYvKHN1u9

One of them, Rev. George Michael Whitley, brought up the horrifying Pike County Massacre, where seven members of the Rhoden family and one member of the Gilley family (who was engaged to a Rhoden) were shot and killed April 22, 2016 in crime scenes spanning three trailers and a camper. Members of Wagner family were charged in the murders. One of the defendants, Edward “Jake” Wagner, had had a daughter with victim Hanna May Rhoden. Cases involving the crime spree are ongoing.

The defense in Reader’s sentencing said the former sheriff’s experiences caused him to have post-traumatic stress disorder.

Boulger: he has flaws- there’s no question about it. He drove his office until the wheels came off. But he is basically a decent human being who has done what he could to help the county. Boulger is asking for probation (community control). @LawCrimeNetwork

“Charlie Reader was entrusted to enforce the law in his community and literally gambled it away,” Ohio Auditor of State Keith Faber said in reaction to the sentence. “His choices do not diminish the dedication of the thousands of law enforcement across Ohio that willingly sacrifice, serve, and protect us every day- these men and women deserve our utmost respect. I commend the quality and committed investigators and prosecutors who unearthed his misconduct and ultimately brought him to justice.”

“The felony charges to which Reader pled guilty all relate to evidence bags containing seized currency which were in Reader’s possession,” a press release from Faber’s office states. “The Conflict of Interest charge relates to Reader’s purchase of a Nissan Versa at the Pike County Sheriff’s auction of seized vehicles. Reader had a straw buyer purchase the vehicle for $2,000. Several months after the purchase, Reader sold it for $5,500.”

[Screengrab via The Law&Crime Network/Angenette Levy]