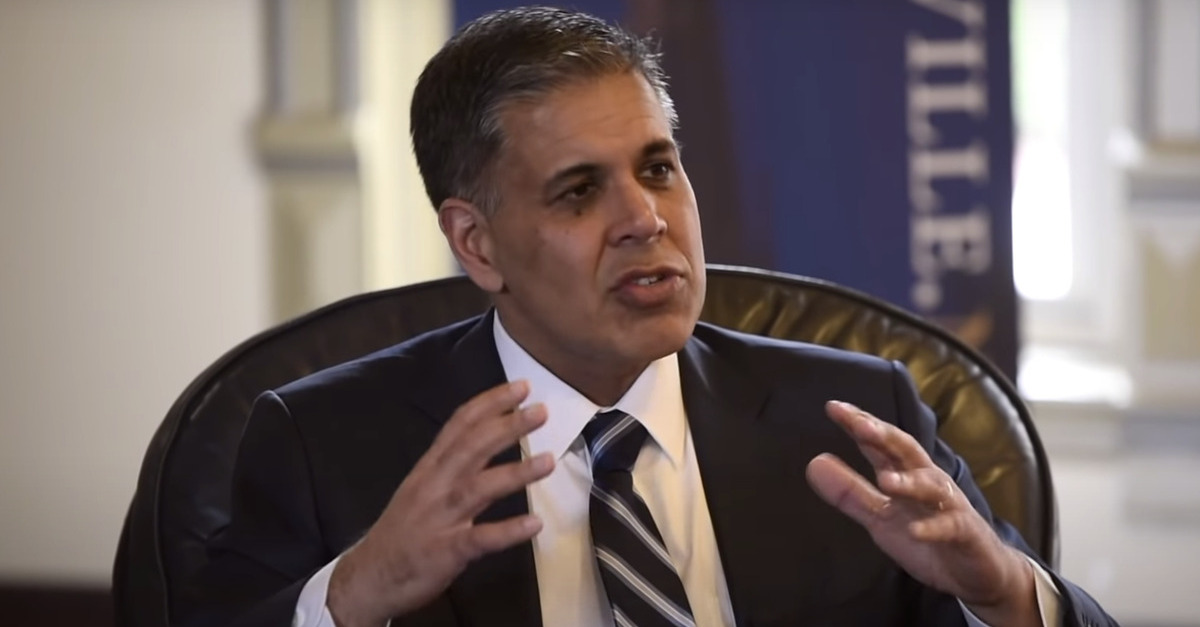 Judge Amul Thapar seen speaking on a panel at the University of Notre Dame.

Acknowledging that “access to pre-viability abortion is a constitutionally protected right,” a federal appellate court blocked a restrictive Tennessee abortion law Friday, but a conservative member of the three-judge panel urged the Supreme Court to overturn Roe v. Wade.

Despite the court’s unanimous agreement that Tennessee’s law was unconstitutional, a former Donald Trump SCOTUS shortlist frontrunner had bitter words for his two Democratically-appointed colleagues. U.S. Circuit Judge Amul Thapar concurred in the court’s judgment, but he delivered a clear message of his own: It’s time to overrule Roe v. Wade.

At issue were two provisions of Tennessee’s House Bill 2263. Section 216 makes it a crime to perform an abortion at any time after the detection of a “fetal heartbeat.” Section 217 criminalizes any abortion in which “the physician ‘knows’ the reason for the abortion is ‘because of’ the race, sex, or a Down syndrome diagnosis of the fetus.” The law includes an exception for abortions performed in certain instances of medical emergency.

Several physicians and reproductive health centers challenged the law, and in July 2020, the district court issued an injunction blocking the law’s enforcement on the grounds that “heartbeat and gestational-age bans” violate substantive due process rights. Affirming that ruling, Judge Daughtrey reasoned that Tennessee “is unable to argue its way around the plain and simple interpretation of section 216 as banning abortions before viability,” and that under controlling precedent, pre-viability bans on abortion are unconstitutional.

Judge Daughtrey ruled that all of Section 216’s restrictions place an undue burden on constitutionally-established rights, commenting that “‘a substantial burden’ is an understatement when addressing any gestational-age-dependent regulations that leave a person with no alternatives at a certain point in time.” Calling Tennessee’s argument “unsound,” Daughtrey wrote that, “[the state’s] experts declare—contrary to mainstream scientific understanding—that a fetus can begin experiencing pain at that time.”

The Supreme Court, continued Daughtrey, has already specified that whatever interests the state purports to have in restricting abortion, those interests “are of no consequence pre-viability.” Quoting both Planned Parenthood v. Casey and the more recent Whole Woman’s Health v. Hellerstedt, Daughtrey argued that “[t]he Supreme Court has been clear that laws that have the purpose or effect of placing an obstacle in the path of a woman seeking abortion ‘cannot be considered a permissible means of serving its legitimate ends.'” Daughtrey went on to call special attention to the legislative history of Tennessee’s law — which, like the one challenged in Whole Woman’s Health, was likely passed by a legislature that knew it violated Roe v. Wade. “This legislative history,” wrote the judge, “indicates a likelihood that the justifications offered in court have been mere pretext and that the bill was passed with knowledge that it was unconstitutional.”

The court also upheld the injunction relating to Section 217 of Tennessee’s law, based on the district court’s ruling that the statute was unconstitutionally vague. In her opinion, Judge Daughtrey laid out the potential quandary:

“Today is a huge win for pregnant people in Tennessee,” said Rabia Muqaddam, a staff attorney for the plaintiff Center for Reproductive Rights, in an email statement to Law&Crime. “These bans would dangerously prevent patients from getting care, and politicians should not get to decide what is an acceptable reason for seeking an abortion,” she continued. Muqaddam urged legislative action on the issue of abortion, saying, “With a case that could overturn Roe v. Wade before the Supreme Court, Congress must act swiftly to protect abortion access and declare abortion bans like these illegal by passing the Women’s Health Protection Act.”

Circuit Judge Thapar, however, saw things quite differently from the court’s majority. The former George W. Bush appointee to the U.S. District Court for the Eastern District of Kentucky was also on former President Donald Trump‘s shortlist for an appointment to the U.S. Supreme Court. Thapar appeared to address the Supreme Court directly in his lengthy opinion.

Thapar began by reluctantly acknowledging that, “[n]one of [Tennessee’s] timing restrictions are permissible under the Roe/Casey framework.” Despite that reality, though, Thapar devoted the bulk of his 34 pages not to analyzing what the law is, but rather, what he believes it should be.

“Roe and Casey are wrong as a matter of constitutional text, structure, and history,” Thapar pronounced. “As Justice Thomas recently reminded us,” he continued, citing Justice Clarence Thomas‘ dissent in a 2020 case, “these cases ‘created the right to abortion out of whole cloth, without a shred of support from the Constitution’s text.'”

Thapar railed against the Roe and Casey Court for “manufacturing a right to abortion, ” and “den[ying] the American people a voice on an important political issue.” The untenable result, Thapar argued, is that “Judges have been enlisted to serve as legislators, producing a make-it-up-as-you-go abortion jurisprudence.”  “All the while,” he continued, “stripping states of their sovereign authority.”

Thapar wrote for pages about the perils of upholding the Roe and Casey rules, arguing that they conflict not only with “the original understanding of the Constitution,” but even with more modern frameworks. Individual states, Thapar argues, should be permitted to undertake “efforts to combat fetal pain,” which, according to the judge, fall in line with what “public polling,” “dozens of legislatures,” and “the rest of the world,” agree.

The answer to differing views on abortion, according to Thapar, is for different states to pass different laws. “Tennessee can do one thing, Ohio another,” he wrote, “and Kentucky and Michigan can learn from both.” Shortly thereafter, Thapar seemed to lament, “[b]ut as a lower court judge, I am bound by the Supreme Court’s decisions, whether right or wrong.”

Thapar also had harsh words for the majority on its conclusion that Section 217 was unconstitutionally vague. Dissenting on that part of the ruling, which he said was not directly related to the rules established by Roe and its progeny, Thapar slammed a majority that “misapplies precedent and usurps the democratic processes of a sovereign state—all in service of an abortion right that exists nowhere in the Constitution.” Thapar then asked whether other laws, such as conspiracy statutes, anti-money laundering schemes, and anti-discrimination laws are also “now up for grabs?” “The majority stands alone,” wrote Thapar, “against common sense, the English language, and basic legal principles.”

“And its decision to strike down the anti-discrimination statute at the altar of abortion is wrong,” he concluded.

Ending his plea to the high bench to retract the rules of Roe and Casey, Thapar wrote, “Justice [Oliver Wendell] Holmes once remarked that ‘a page of history is worth a volume of logic.'” “The argument that the Constitution contains a right to abortion,” he continued, “has neither.”

The question of whether and how to regulate or restrict abortion should belong, argued Thapar, with state legislatures that can legislate in accordance with community values.

“And if the public is unhappy,” the judge wrote, “it can fight back at the ballot box.”

In his final line, Thapar conspicuously employed the use of the term “choice,” urging, “The courts should return this choice to the American people—where it belongs.”

[screengrab via University of Notre Dame]