Judge Refuses to Let Jacob Chansley Out of Jail Ahead of Sentencing, Calls Him a ‘Mascot’ for QAnon and ‘Hopes’ He’s Really Had a Change of Heart

The federal judge who has presided over Jacob Chansley’s criminal case doesn’t appear to be entirely convinced that the so-called “QAnon Shaman” of Jan. 6 has had a change of heart and renounced the sprawling conspiracy theory for which he is a “mascot.” Senior Judge Royce Lamberth, a Ronald Reagan appointee, said in a memorandum opinion and order unsealed Friday that Chansley will not be allowed to get out of jail ahead of sentencing for obstruction of an official proceeding.

“Upon consideration of the parties’ briefs, the arguments offered at the hearing, and the record herein, the Court will DENY Chansley’s motion for release from custody pending sentencing,” Lamberth wrote.

Just one week ago, Chansley, perhaps the most unique Jan. 6 defendant out of the hundreds of people charged, pleaded guilty in Lamberth’s court.

Defense lawyer Albert Watkins has gone out of his way to argue that his client has repudiated QAnon.

“Mr. Chansley, a long-avowed and practicing Shaman, has repudiated the ‘Q’ previously assigned to him and requests future references to him be devoid of use of the letter ‘Q’,” Watkins recently wrote in a statement.

But Judge Lamberth said Friday that he hasn’t heard that from Chansley’s own mouth.

“Chansley is a mascot of ‘QAnon,’ an active conspiracy group,” wrote Lamberth, before tacking on the footnote (citation to NY Times removed) pointing out that Chansley’s plea hearing was interrupted by random people screaming “Freedom”:

Chansley’s counsel said in a statement that Chansley “repudiated” QAnon. Chansley has not personally indicated as such to this Court. Still, regardless of any potential repudiation, there is no doubt that he is a mascot for the QAnon movement. Hundreds of attendees joined Chansley’s September 3, 2021 plea-agreement hearing on the public access line, and at least once this Court’s proceedings were interrupted with shouts of “Freedom!”

Lamberth said that Chansley has ultimately “failed” to persuade the court with “clear and convincing evidence” that he is not a flight risk. The judge also expressed skepticism about whether Chansley has really had a change of heart. 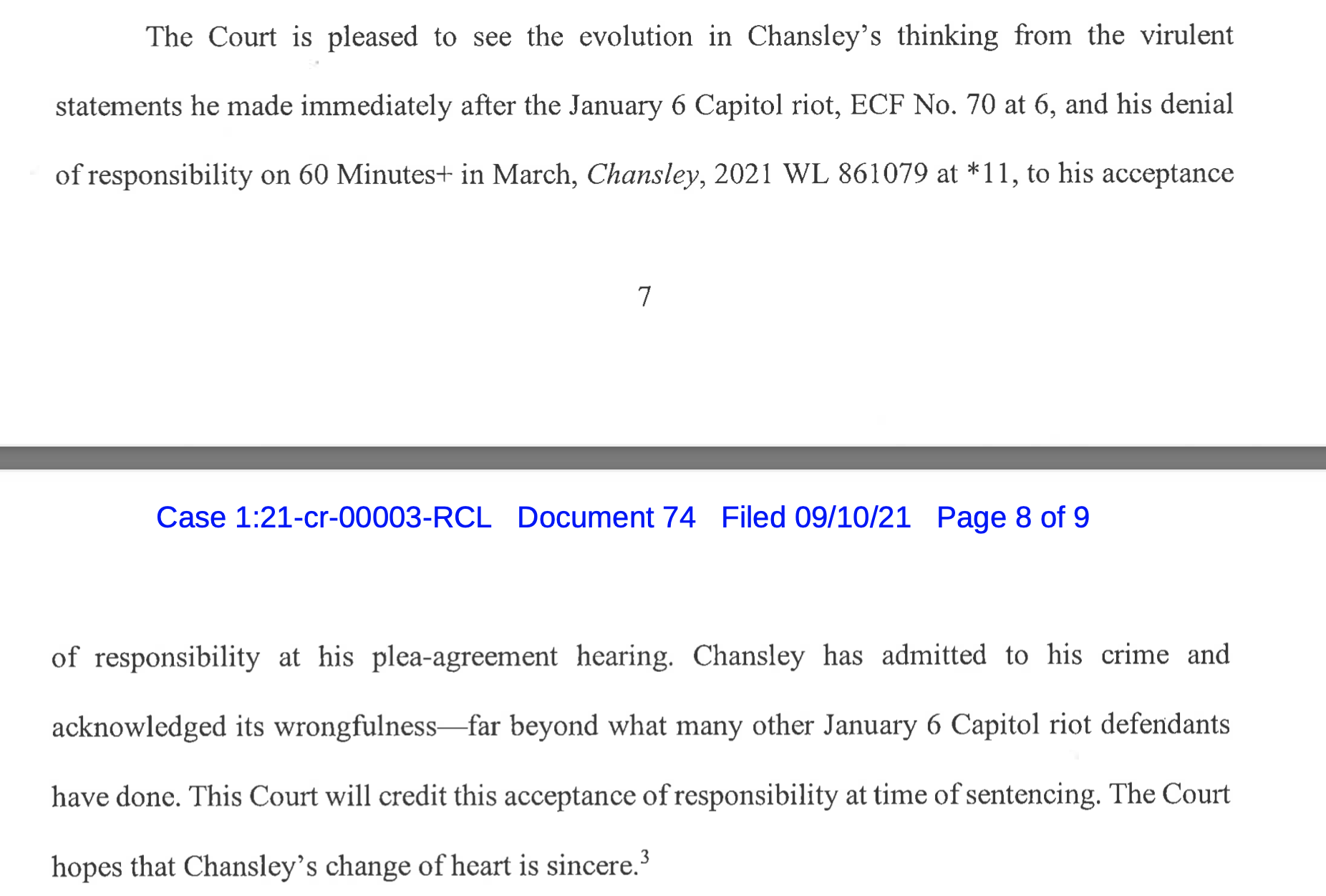 Again, the judge tacked on a footnote pointing out that his “hopes” for Capitol siege defendants who pleaded guilty in his courtroom have been “dashed” before. Though he did not name Anna Morgan-Lloyd, Lamberth was clearly referring to the Fox News interview she did after she was sentenced to probation. During that appearance, Morgan-Lloyd downplayed her actions.

Lamberth took Morgan-Lloyd’s words as being in direct conflict with the “contrite statements she made to the undersigned.”

As for Chansley, the judge had twice denied already his requests for release from jail. Because the third time was not the charm, Chansley will have to remain jailed ahead of his Nov. 17 sentencing.

The government has said that Chansley’s sentencing range has been calculated between 41 and 51 months in prison. The judge can go higher or lower, so Chansley’s behavior between now and Nov. 17 could prove crucial.