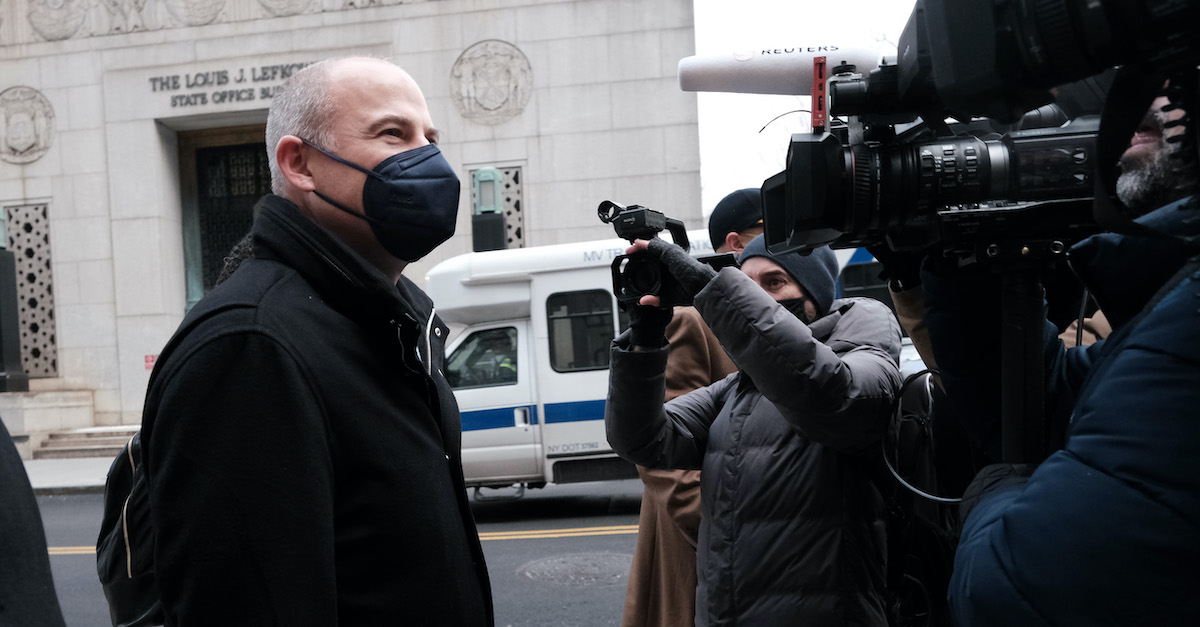 Michael Avenatti arrives at a federal court in Manhattan for a criminal case.

Disgraced celebrity attorney Michael Avenatti owes $259,800.50 to Nike for their legal fees expended in responding to his attempted extortion of the company for millions, a federal judge ruled on Monday.

The restitution ruling follows a string of setbacks for Avenatti, who lost his bid last week for an indicative ruling that he deserves a new trial in that case. Avenatti stands convicted by two separate juries in the Southern District of New York: one in the Nike case and another one for defrauding Stormy Daniels.

The restitution ruling, however, is not a total defeat for Avenatti: Nike requested that the restitution for their legal fees add up to $856,162.

In July, U.S. District Judge Paul Gardephe sentenced Avenatti to two and a half years in prison for what he described as an “outrageous” scheme to extort Nike of up to $25 million.

“He hijacked his client’s claims, and he used those claims to further his own agenda,” Gardephe said at the time.

In 2019, Avenatti represented amateur youth basketball coach Gary Franklin, whose teams had previously been sponsored by Nike. After the company dropped its sponsorship of his teams, Frank blamed two allegedly corrupt Nike employees and sought Avenatti’s assistance regaining it.

Instead, Franklin said, Avenatti exploited his client’s case for his own purposes. Avenatti threatened to expose a corruption scandal of improper payments to amateur youth basketball players if Nike didn’t pay him and his colleague Mark Geragos between $15 and $25 million to perform an internal investigation, prosecutors said. Geragos was never charged with an wrongdoing.

Nike’s attorneys from the firm Boies Schiller sought $1 million in restitution for assisting in the government’s investigation of Avenatti, preparing witnesses for the trial, analyzing court filings, attending hearings and the trial, addressing Avenatti’s campaign against Nike following his arrest, and representing Nike in connection with sentencing and restitution.

Avenatti argued that Nike does not count as a victim under the Mandatory Victims Restitution Act (MVRA), an argument that the judge rejected.

“The Court concludes that Nike is a ‘victim’ within the meaning of the MVRA, and that it is entitled to restitution for the reasonable attorneys’ fees that it incurred in assisting in the Government’s investigation and prosecution of Avenatti’s crimes,” Gardephe wrote in a 21-page ruling.

In July 2021, Avenatti got emotional at his sentencing, where he reflected on his fall.

“I lost my way. I betrayed my values, my friends, my family and then, myself. I became driven by the things that don’t matter in life,” Avenatti said, later renouncing the mediums that turned him into a star of the anti-Donald Trump resistance.

“TV and Twitter, your honor, mean nothing,” he declared at the time.

Avenatti received a two-and-a-half year sentence that day, but he remained a free man until last week because of the COVID-19 pandemic and preparations for trial in the Daniels case.