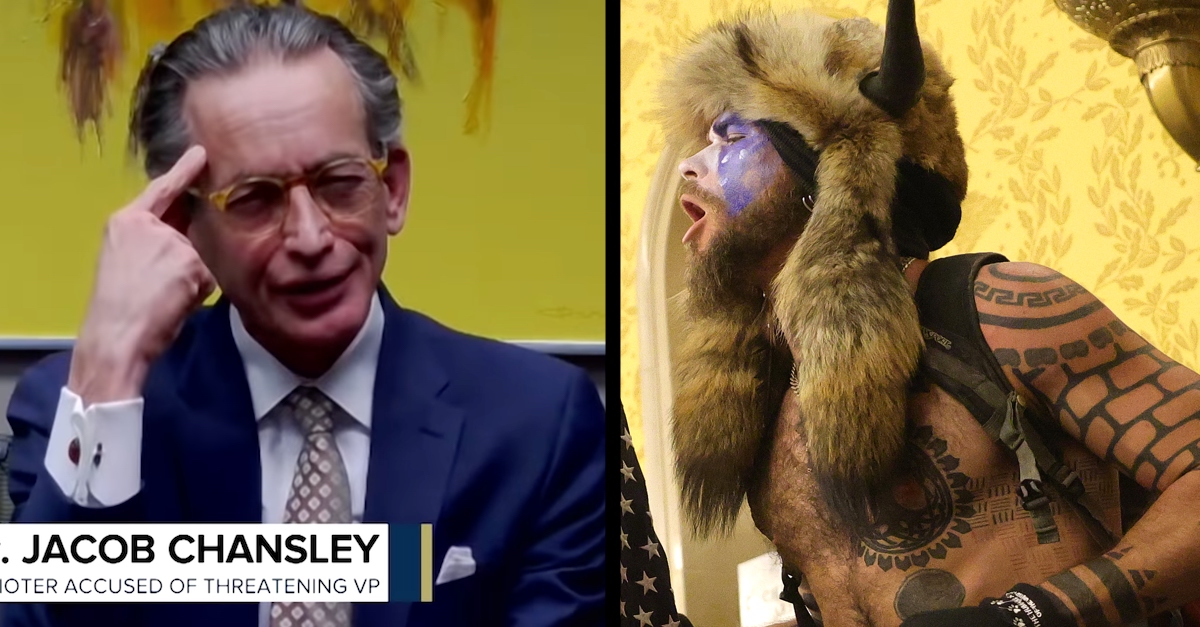 Like his shirtless, face-painted and horn-festooned client, lawyer Albert Watkins is not a man of understatement. He once boasted that he grilled a witness so brutally that the person later died by suicide. He routinely likens the due-process-replete prosecutions of the accused U.S. Capitol rioters as the product of a “lynch mob” mentality. He repeatedly compared former President Donald Trump’s rhetoric to that of Adolf Hitler, and he recently told a reporter that his client Jacob Chansley—and other Jan. 6th siege participants more generally—were “fucking short-bus people.”

Shock jock lawyer Watkins may have outdone himself on Wednesday, in a motion seeking Chansley’s pretrial release with comparisons to the Russian gulags and the Cambodian genocide ripping a page from the Rep. Marjorie Taylor Greene (R-Ga.) school of history.

Apparently proud of comparing his client’s routine pretrial detention to two of the 20th century’s greatest atrocities, Watkins’s representatives trumpeted the analogy in a press release misspelling the name of one of the genocidaires as the “Khmer Ruge” (it’s Khmer Rouge).

Press release from one of Watkins’s representatives

Though not written in block caps, the legal brief Watkins filed to a federal judge was hardly more modest.

“Since January 9, 2021, [Chansley] has been subjected to COVID-19 response protocol mandated solitary confinement for 22 plus hours per day,” Watkins wrote, adding that so-called “QAnon Shaman” has been “compelled to endure cruel and unusual punishment of a nature akin to the gulag of Solzhenitsyn fame.”

Late Russian novelist and philosopher Aleksandr Solzhenitsyn’s “Gulag Archipelago” awakened the world to Soviet repression and human rights abuses. The dissident’s imprisonment and confinement in labor camps stemmed from privately criticizing Josef Stalin in a letter, a thought crime of anti-Soviet propaganda for which he served an eight-year sentence in the gulags, followed by internal exile.

Chansley stands accused of illegally barging into the U.S. Capitol with a spear-pointed pole to prevent the certification of President Joe Biden’s election and leaving a threatening note behind for then-vice president Mike Pence. Federal sentencing guidelines suggest that he will face up to 30 months in prison if convicted, following a trial by a jury of his peers. He has received fulsome due process in the pretrial stage.

Unlike Chansley’s isolation, justified by prison authorities as an effort to prevent the spread of a deadly contagion, Solzhenitsyn’s seclusion was strictly punitive for defying official diktats.

For good measure, Watkins also compared Chansley’s pretrial detention to something the Khmer Rouge might do.

The Khmer Rouge systematically killed up to two million people, including through due-process free executions, starvation and preventable disease.

Over the course of his pre-trial due process, Chansley fought for and won the right to be served organic meals in prison on the grounds of his supposed shamanism, even though experts dispute that the faith has any such dietary restriction. Corrections officials have tried to prevent Chansley, and his fellow accused rioters, from getting COVID-19, unlike the Cambodian labor camps where deadly disease ran rampant.

Playing on Trump’s message to his supporters, Watkins colorfully asserted that his client is “special.”

“The former President blanketly referred to those who appeared at the Capitol on January 6, 2021 as ‘special,'” Watkins wrote. “Chansley is indeed special. The Government knows Chansley is special.”

Psychological examination results, still pending, have not yet backed up that assertion.

Read the legal brief below:

(image of Watkins via the Law&Crime Network; image of Chansley via Win McNamee/Getty Images)