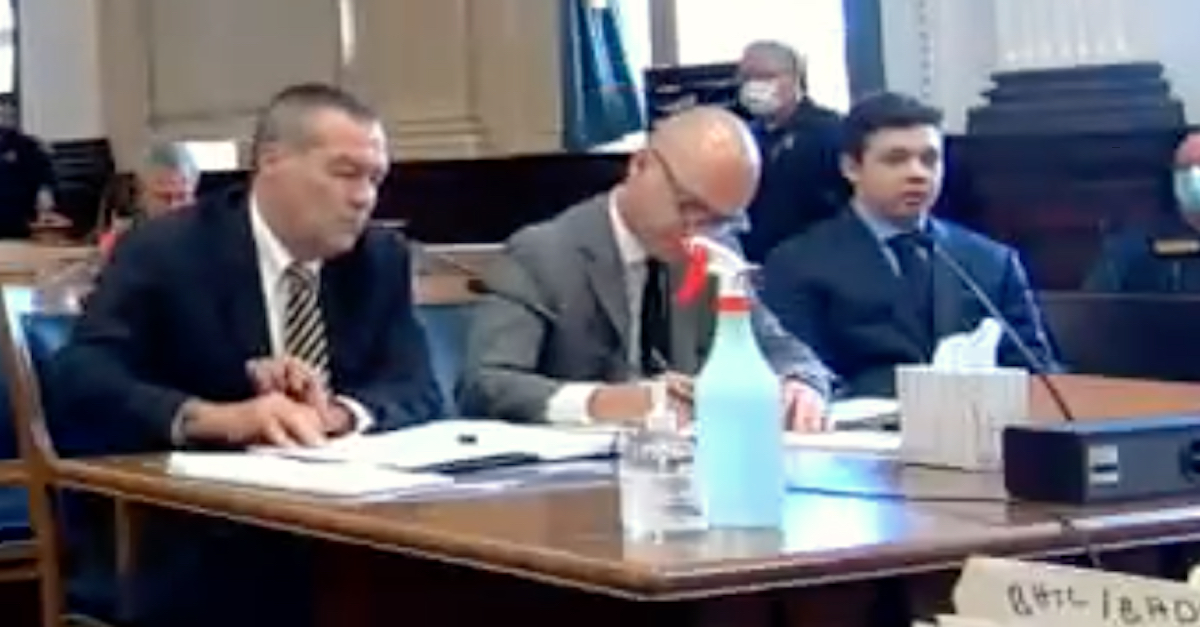 Kyle Rittenhouse and his attorneys appear in court during a Sept. 17, 2021 pretrial hearing.

It was an all-but ugly day in court for the prosecutors hoping to put Kenosha shooter Kyle Rittenhouse behind bars on six counts, including murder. During a lengthy evidentiary hearing, the defense scored victory after victory while the government was increasingly frustrated at the judge’s rulings in favor of the defendant.

Assistant District Attorney Thomas C. Binger argued that the defendant is a “teenage vigilante” — and a “violent vigilante” at that. But that was precisely the problem with the state’s evidence, according to Kenosha County Judge Bruce Schroeder.

In both instances, the judge ruled that the government’s offered evidence would be far more prejudicial than it was worth.

“I would be reversed,” Schroeder said — anticipating an appellate court’s decision about the merits of such evidence.

The court opined that deadly shooting of August 2020 was “nothing like the incident involving the sister” two months prior and was “exactly the kind of evidence the rule is designed to prohibit.”

Under the Wisconsin Rules of Evidence, “evidence may be excluded if its probative value is substantially outweighed by the danger of unfair prejudice” or if it causes “confusion of the issue” a jury is called to determine. Rittenhouse’s attorneys have admitted their client pulled the trigger; the teen killed two and injuring one.  His attorneys claim their client acted in self-defense. Therefore, the legal case is shaping up to focus on whether Rittenhouse was justified in “terminating” what he “reasonably believe[d] to be an unlawful interference with his . . . person.” That standard requires a probing and focused look at whether Rittenhouse’s thinking in the moment. Prosecutors are legally able to argue that Rittenhouse wasn’t acting reasonably. They could also counter that Wisconsin law did not allow Rittenhouse to engage in “unlawful conduct of a type likely to provoke others to attack him.”

Judge Schroeder told prosecutors that if they were able to offer evidence showing Rittenhouse had a “consistent motive” to attack people on the street (or something similar) then such evidence would be allowed. However, Rittenhouse’s interjection on behalf of his sister in an unrelated dispute in another place at another time simply suggested a “propensity” towards violence on the part of the defendant. And character evidence is generally inadmissible as a rationale to prove conduct. Prosecutors can use, however, a defendant’s conduct to prove “motive, opportunity, intent, preparation, plan, knowledge, identity, or absence of mistake or accident.” The law draws a fine line between character evidence intending to prove conduct and evidence of conduct as proof that subsequent conduct also occurred.

“This is an unusual homicide case,” Binger insisted. “This isn’t a whodunnit. The issues isn’t whether he killed someone.”

Rather, the government attorney said, evidence of the attack on the woman who was engaged in a dispute with Rittenhouse’s sister illustrates the defendant’s state of mind. It “illuminates the truth” for the jury because it shows that Rittenhouse is someone who frequently gets involved in issues that don’t concern him and about which he knows few facts and details, prosecutors said. That incident, they argued, also speaks to  Rittenhouse’s “concept of self-defense.”

The state essayed a similar line of thought regarding the Proud Boys evidence by pointing at the defendant’s state of mind when the shooting occurred and casting it against the backdrop of racial justice protests.

“Most everyone there was there because of their beliefs, one way or the other, in regards to the shooting of Jacob Blake,” Binger told the court while addressing the night in question. “Chaos tourists like the defendant were drawn like a moth to the flame to our community. He was drawn to this incident because of his beliefs, which align with the Proud Boys. They take pride in using violence to achieve their means.”

As with the defendant’s attack on the woman, however, Schroeder nixed the evidence related to the Proud Boys.

Arguably the largest setback for the government came over a request to show jurors a video of Rittenhouse expressing his desire to shoot a Black man who exited a CVS pharmacy because he thought the man was shoplifting. The defense conceded the facts about the video – admitting it was the defendant’s voice on and that he was referring to the same gun he later used to kill two people – but still requested that the evidence be kept far away from jurors in the case.

“Bro, I wish I had my fucking AR,” Rittenhouse says. “I’d start shooting rounds at them.”

The defendant, however, did not use a weapon but instead dialed 911 about his concerns as to the man at the pharmacy.

Binger, again, argued that the video goes to defendant’s state of mind and was yet another instance of Rittenhouse looking for trouble as a vigilante expressing a desire to intervene without knowing the facts.

“This is unquestionably a far more powerful other act,” Binger said in reference to the earlier evidence. “This is giving the jury an honest insight into the defendant’s state of mind. This is information the jury should have. They deserve to hear the truth about what the defendant was thinking and what his intent was with this weapon.”

But the government’s increasingly astonished and angry pleadings went nowhere, and the defense was left literally smiling.

“Once again, I think the evidence is too dissimilar,” the judge ruled while repeatedly deciding that the CVS video evidence only really goes toward “propensity” and was only being used to support the notion that Rittenhouse is a “vigilante killer.”

“The [incidents] are too dissimilar,” Schroeder continued. “He makes some threatening statements for sure. Statements. Then he takes a proper action. ‘Threatening’ is probably the wrong word.”

Binger then shot back in increasingly frustrated tones — his dissatisfaction with the judge apparent — by saying the evidence was “crucial” for jurors and “identical” because “in both situations the defendant is taking the law into his own hands.”

“He’s making assumptions,” the attorney continued. “He’s talking about taking the law into his own hands and shooting his AR-15.”

In the end, the judge said he would definitely rule against the inclusion of the evidence if he had to do so immediately — but that he didn’t, so he said he would reserve his judgment for the trial stage of the prosecution.

The government also lost two motions to compel the defendant to produce the names of donors to two separate foundations set up for Rittenhouse’s legal defense — one of which involved attorney L. Lin Wood. But in each case, the judge said he was open to issuing a direct subpoena.

Additionally, the government, again audibly shocked and appalled, lost out on a bid to note that Rittenhouse’s gun was purchased using stimulus money because, in the judge’s words, those facts were being used “to denigrate” the admitted shooter over how he spent his money.

One small ray of light for the government on the motions came when the judge denied a defense request to introduce evidence that one of the men Rittenhouse shot and killed had prior child sex crimes convictions — again noting the prejudicial nature of that evidence.

But one new piece of evidence discussed at the hearing may prove to be instrumental for the state’s case against the 18-year-old. Near the end of the hearing, amidst a detailed back-and-forth discussion about who began the chase that turned deadly on the night in question, the government revealed they have a video from an “FBI” aircraft that shows Rittenhouse initiating hostilities against Joseph Rosenbaum. The defense said they hadn’t seen that evidence before.