You’ve probably seen the image if you’ve ever read about the “Golden State Killer” case: Defendant Joseph James DeAngelo, who was arrested at age 72 and is now 74, was pushed into court in a wheelchair; his mouth was open and he appeared to stare at nothing in particular. Prosecutors have said that he faked “feeble incoherence” when authorities first confronted him about his prolific crime spree. They released video on Friday showing that he was plenty mobile, and in control of his faculties.

Watch the jailhouse footage in the video above (first 10 minutes).

In a press conference, Sacramento County District Attorney Anne Marie Schubert narrated footage showing the defendant climbing around his cell and even working out. Video dated June 1 showed DeAngelo swinging his arms while apparently exercising. He did not really engage his legs in that moment–he just stood–but he did use his legs on the 17th. In that portion of the video, he climbed onto his desk, and covered the light in his cell.

Schubert pointed out the similarities with the Golden State Killer crime scenes. He covered television or lights at with blankets, Schubert said. She showed reporters pictures from back then.

“So when you look back in time four decades, and you now stand in the presence of 2020, you can see that Joseph DeAngelo is no different today than when he was 45 years ago,” Schubert said.

A clip from July 18, 2020 showed DeAngelo wiping down the edges of his cell.

“This last one is to simply demonstrate to you his mental acuity, his dexterity, his ability to deceive or attempt to deceive the entire world into believing he is a feeble old man,” he said.

“These are just snippets into the window of the mind of a sociopath,” she said. “He is, quite simply, the definition of one. He has, and always will be a sociopath in action. Today the world knows that.”

The defendant pleaded guilty back on June 29. At the time, he appeared quite frail.

#GoldenStateKiller – Joseph DeAngelo, sounding very old, answers simply with a shaky “yes” or “not” to every question the judge is asking. pic.twitter.com/I66tITPoMH

Schubert reviewed the footage beginning at about 4:00 and ending at about 9:15 in the embed above. 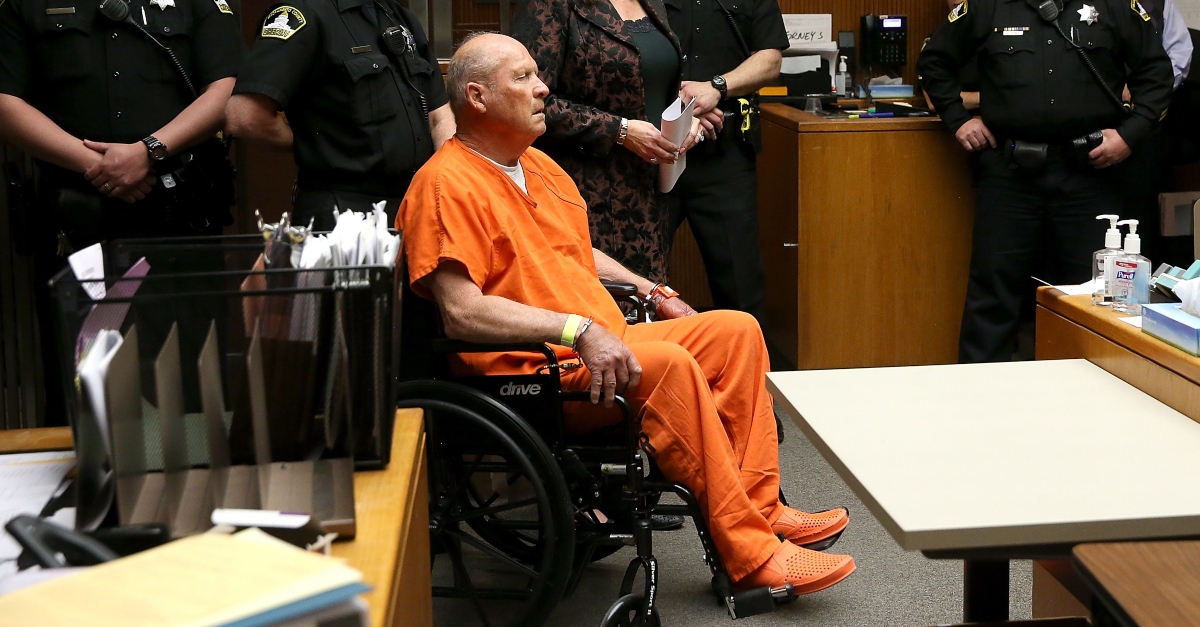 Judge Michael Bowman sentenced DeAngelo on Friday to life in prison without the possibility of parole for 13 murders and other charges. Prosecutors said the defendant engaged in a horrifying crime spree in the 1970s and 1980s, killing 13 people, committing 50 rapes, and engaging in more than 120 burglaries. The majority of incidents were uncharged because of the statute of limitations, but DeAngelo admitted to those in court.

DeAngelo gave a brief statement before his formal sentencing on Friday.

“I’ve listened to all your statements,” he said. “Each one of them, and I am truly sorry to everyone I’ve hurt.”

Orange County District Attorney Todd Spitzer did not buy it. He pointed out that during the court statement DeAngelo stood up fast from his chair, and had a strong voice. This was inconsistent with “the body that he was trying to fake us all out with.”

DeAngelo never looked up once during the earlier statements, even when his loved ones spoke on his behalf, according to Spitzer. The defendant never apologized to people who said they loved him, said the prosecutor.

“He didn’t just destroy your lives,” Spitzer said. “Could you imagine being the daughter of Joseph DeAngelo? Going through life asking yourself, ‘Did he pass on, through my genetic framework, something that makes me somehow the same?’ Or his former wife: The betrayal to their marriage and that relationship. He not only hurt all of you. He left a wake of devastation with his family members who have part of him inside of them. And that has got to be a terrible, terrible, terrible nightmare.”

Spitzer said that DeAngelo proved to him that the apology was a fake because it left out the defendant’s family members. DeAngelo was just trying to get positive media coverage and shape posterity by making a court apology, he said.

“I’m not going to repeat what I said,” Spitzer answered later in response to a reporter’s question. “But I’ll try to say it more succinctly for radio: It was all B.S.”