Three days have been scheduled for victim impact statements in the Golden State Killer sentencing hearing. On the first day, defendant Joseph James DeAngelo, 74, had to sit there while family members of the rape survivors said he had a “little” penis.

“He truly is an evil monster with no soul,” said survivor Patricia Murphy in a statement read by her daughter in court. “Did his little penis drive him to be so angry all the time? Did he study criminology so he could carry out his evil deeds as a bad cop without getting caught? Did his wife and daughter suspect anything?”

Murphy said DeAngelo attacked her on September 4, 1976 when she was loading a basket of laundry into the car.

#GSK – Daughter of survivor Patricia Murphy reads her mother’s victim impact statement, “Did his little penis cause him to be so angry all the time?” #JosephDeAngelo pic.twitter.com/9Wu7AQSskz

Authorities said that DeAngelo committed over 120 burglaries from the mid-1970s to the mid-1980s, committing 50 rapes and 13 murders along the way.

“He punched me in the face and broke my nose,” wrote Murphy. “I had a concussion from falling backwards and hitting my head on the driveway. I saw stars. I lost consciousness.” She was diagnosed with post-traumatic stress disorder.

The cases went unsolved for decades until authorities matched suspect DNA to a genealogy database. Police tracked down DeAngelo, a former Exeter police officer fired in 1979 for shoplifting a hammer and dog repellent.

In the end, the defendant technically pleaded guilty only to 13 counts of murder, and other kidnapping charges. Others, including the rape cases, reached the statute of limitations. Nonetheless, he admitted to those uncharged counts in court. That gave Murphy and others and chance to speak in court.

Pete Schultz, who spoke on behalf of his mother, sister, and father, said the defendant broke into their home in Carmichael, California on October 18, 1976. DeAngelo tied the 11-year-old Schultz to a bedpost, locked up the 5-year-old sister, and “performed horrific acts” against his mother Winnie Schultz.

“We have lived with this for 44 years as a family, and we are here to say that our mother is not Jane Doe No. 22 and we are not just No. 37 uncharged offense,” he said. “We are the family of Winnie Schultz and we have all survived because of her bravery and resolve to do whatever it took to save herself and her family.”

Schultz said their case was the seventh in the Sacramento area, and the one known for bringing attention to the growing danger of the serial crimes. Officers asked Winnie Schultz if the attacker he had any recognizable tattoos or scars.

She said her head was covered the entire time, and she was bound, but “she was certain he had a very inadequate penis.” For emphasis, Pete Schultz extended his pinky finger. 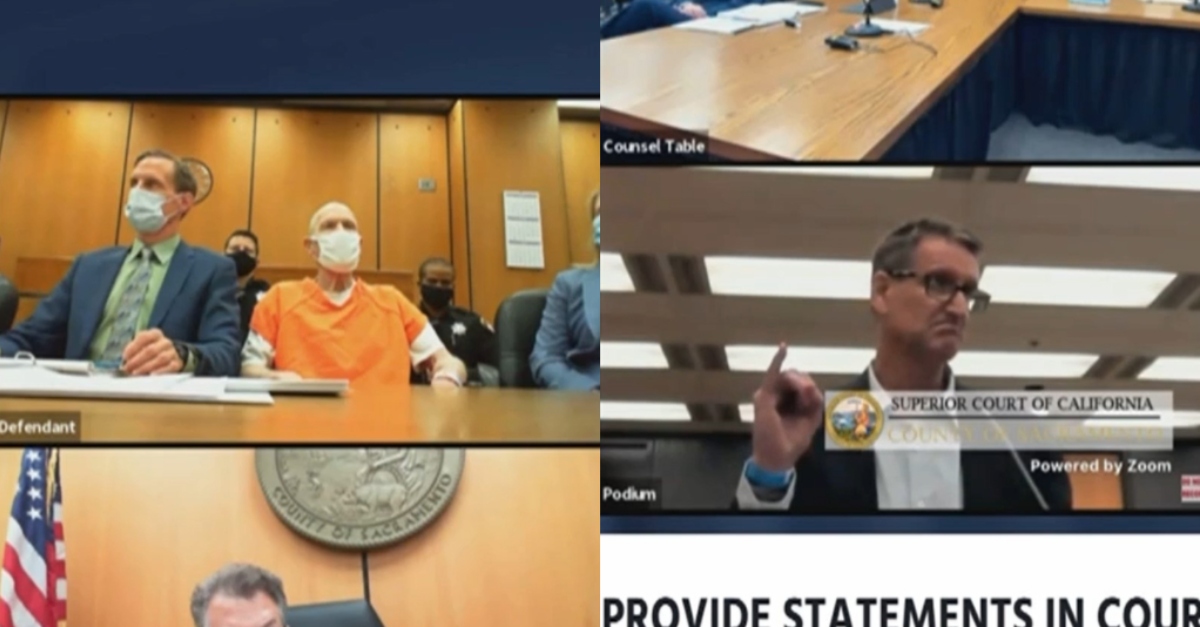 “DeAngelo may have stolen our mother’s wedding ring, her jewelry, and $250 in donation monies I had collected intended for the American Cancer Society, but he did not steal our hopes, our dreams, and the spirit of our family,” Pete Schultz said.

DeAngelo is set to be formally sentenced on Friday.

Prosecutors said Monday that the jailhouse videos indicate DeAngelo isn’t the feeble man he is making himself out to be. One video, which the judge did not allow to be played in court, purportedly shows DeAngelo “committing a sexual act while watching someone outside of his cell.”