“As the U.S. Attorney’s Office for the Southern District of New York [SDNY] has stated publicly, the investigation into the conduct of the defendant in this case and other possible co-conspirators of Jeffrey Epstein remains active,” the government noted in a letter motion to U.S. District Judge Alison Nathan. “The full scope and details of that investigation, however, have not been made public.”

Prosecutors declined to share any details about that additional grand jury investigation but offered to provide them to Nathan in private and under judicial lock-and-key if she requests such information.

“To the extent it would be useful to this Court for the Government to further elaborate on the nature of the ongoing grand jury investigation, the Government is prepared to file a supplemental letter specifically on that subject ex parte and under seal should the Court request such an explanation,” a footnote in a separate letter motion explained.

One of those motions was filed in reference to an August 17 letter filed by Maxwell’s criminal defense attorneys.

The government asked the court to redact “certain” portions of that already-filed letter–in a motion that is heavily redacted itself: 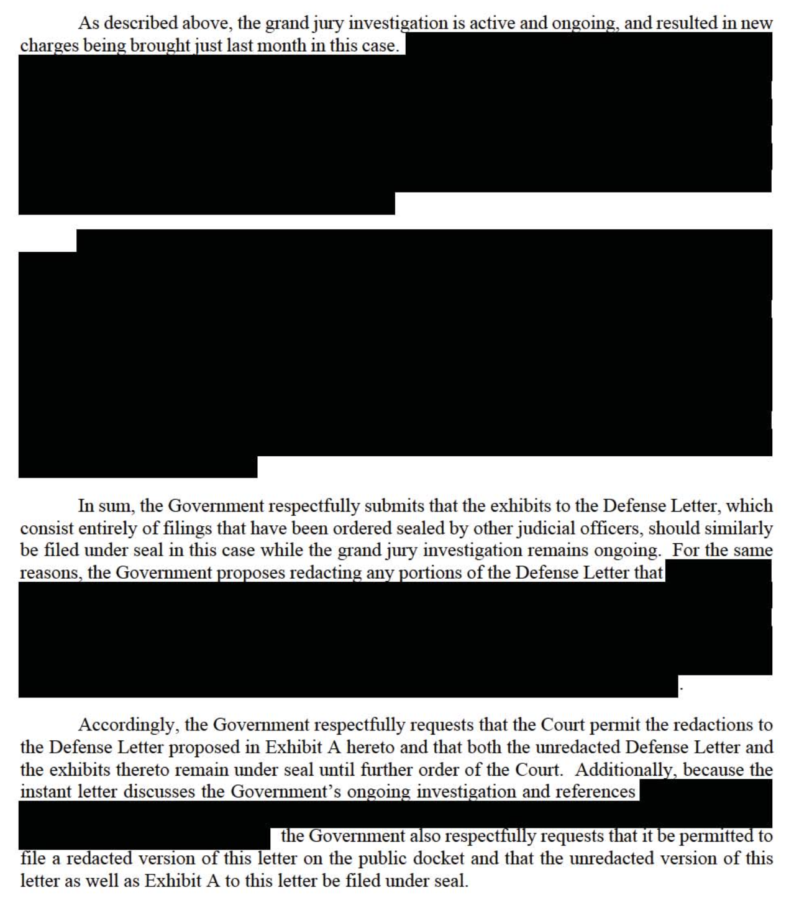 The government’s second motion requests that the SDNY deny a recent request from Maxwell’s counsel “in certain civil cases” to file “discovery materials produced by the Government” under seal. In other words, it appears that Maxwell’s criminal case is becoming–perhaps inextricably–entwined with the protective order for discovery in the years-old (and long-settled) defamation case between herself and Epstein accuser Virginia Roberts Giuffre.

The government attempts to explain the convoluted situation:

Essentially, Maxwell is complaining that the government provided certain information to an unnamed person connected to the Epstein criminal investigation and she wants to use those machinations to her advantage in at least one civil case–which, again, is presumably the ongoing release of Epstein materials connected to the Giuffre controversy.

And that, the government says, is absolutely not the point of the criminal discovery process.

“[T]here is good reason why both parties proposed, and the Court ordered, a protective order that prevents the defendant from using materials obtained through the process of criminal discovery in any of the many civil cases in which she is, or could become, a party,” the motion continues. “To allow the defendant to do so would permit the dissemination of a vast swath of materials, including those that are confidential due to witness privacy interests, personal identifying information of third parties, and relevance in ongoing grand jury investigations.”

Prosecutors say Maxwell’s proposal is an attempt to game things in both her civil and criminal cases:

Here, the Government was particularly concerned about the defendant’s interests in blurring these lines because, among other reasons, her counsel in the criminal case are also her counsel in the Civil Cases. It would be grossly inappropriate for defense counsel to be permitted to sift through the criminal case discovery and cherry-pick materials they may believe could provide some advantage in their efforts to defend against accusations of abuse by victim plaintiffs, delay court-ordered disclosure of previously- sealed materials, or any other legal effort the defendant may be undertaking at any particular time. And yet that is what the defendant proposes.

Maxwell is currently in prison and awaiting trial on various charges related to her alleged role in Epstein’s decades-long sex trafficking operation that preyed on young girls.

Read both letter motions in full below: