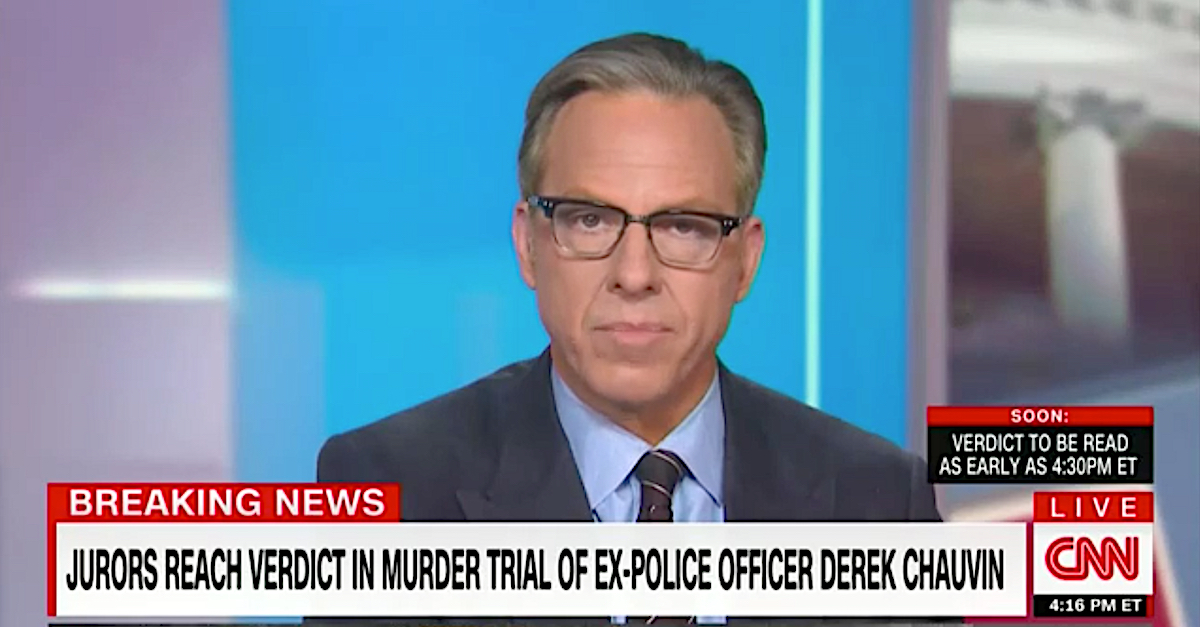 CNN’s Jake Tapper, less than an hour before the reading of verdicts against former Minneapolis police officer Derek Chauvin, shredded defense attorneys and, in the process, any sense of how defense attorneys do their jobs under the U.S. Constitution.

“Defense attorneys gaslight,” Tapper said. “That’s what they do, and that’s their job. This trial is not new in that sense.”

Tapper then took a swipe at prosecutors in an apparent attempt to sound unbiased.

“Prosecution — in different cases — they gaslight, too,” he added — then said it “didn’t work” when the defense tried it in the Chauvin case.

The thrust of the discussion with CNN colleague Don Lemon was that the defense was attempting to twist the meaning of video which showed Chauvin pressing his knee against Floyd’s neck for nine minutes and 29 seconds.

Gaslighting — the psychological concept of forcing someone, usually a victim, to question her own understanding of reality — is not what defense attorneys do. By law, defense attorneys attempt to raise reasonable doubt — or, in other words, they force juries to question whether the government has enough evidence to back up its claims and thus prove a defendant guilty beyond a reasonable doubt. One way to raise reasonable doubt is to attack the elements of crimes charged. In Chauvin’s case, his attorney, Eric Nelson, attacked causation. Here’s why.

The top charge, second-degree murder, required the prosecution to prove four legal elements beyond a reasonable doubt. The first element, that George Floyd died, is not up for debate. The fourth element, the location and date of Floyd’s death, are also not up for debate. The second element, causation, required the state to prove beyond a reasonable doubt that Chauvin caused the death of George Floyd. The defense attempted to suggest that perhaps — just perhaps — Floyd’s underlying drug use or medical conditions played a role in his death. The third element, the underlying third-degree assault upon which the second-degree unintentional murder charge was connected or hinged, required prosecutors to prove, in essence, that Chauvin did intend to cause harm to Floyd through the use of unlawful force which unintentionally caused Floyd’s death. The defense suggested that the police restraint used upon Floyd was permissible under Minnesota law. The jury didn’t believe the defense raised reasonable doubt as to either the second or the third elements of second-degree murder.

The defense’s tactic was a legal attempt to raise reasonable doubt. It was not gaslighting. Gaslighting is the attempt to force people to question their own perception.  Raising reasonable doubt forces people to question the government’s perception. Checks and balances, which allow Tapper to grill heads of state, also allow defense attorneys to probingly question prosecutors. Through multiple videos, autopsies, dueling experts, and in-court arguments, the defense forced the government to back up its claims.

Because the founders of this country feared powerful executives (specifically due to a clampdown on American colonial liberty between Bacon’s Rebellion and King Philip’s War in 1676 and the reign of King George III in 1776), the Sixth Amendment protects the right of defense attorneys to provide a major check and balance against the government’s ability to incarcerate or punish the individual. That’s why:

In all criminal prosecutions, the accused shall enjoy the right to a speedy and public trial, by an impartial jury of the state and district wherein the crime shall have been committed, which district shall have been previously ascertained by law, and to be informed of the nature and cause of the accusation; to be confronted with the witnesses against him; to have compulsory process for obtaining witnesses in his favor, and to have the assistance of counsel for his defense.

There is also a limited Fifth Amendment right to counsel under Miranda v. Arizona.

Attorneys who saw Tapper’s exchange called it a “bleak view of the 6th Amendment.”

According to @jaketapper “Defense attorneys gaslight, that’s what they do.” Pretty bleak view of the 6th Amendment, Jake.

Jake Tapper @jaketapper just said it was a defense lawyer’s job to gaslight the jury. Sigh.

I caught that too. I guess he would take a different view if he or a family member was the defendant.

Lemon suggested people were prone to reinforcing their stereotypes.

“The defense has been trying to make us is not believe what we have seen with our own eyes and what we heard at least 27 times of George Floyd saying ‘I can’t breathe,’ if not more, so they are trying to convince us that, you know, that reality is not reality,” Lemon said. “Jake, as you know, sadly, after the last five years, we live in a post-truth, post-reality world, where people depending on your beliefs or who you believe in or who you trust, you’re going — that’s what you’re going to believe regardless of what the evidence says.”

Lemon continued by suggesting that the Black community feared Chauvin would find a loophole out of being convicted:

So there’s a concern there, especially among . . . people of color, especially among people who look like me. I must be honest because when everyone says ‘of course there’s no way that Derek Chauvin is going to be acquitted,’ ‘there’s no way that they are not going — that he’s not going to be guilty of the most major charge’ and then people of color go ‘oh, yeah, there’s a way because we’ve seen it before, and we thought that the evidence was conclusive.’

“But the polling doesn’t matter,” Tapper said. “What matter is what the opinions of the 12 individuals on the jury think.”

“And the point I’m trying to make,” Tapper continued, is that “the defense did what defense attorneys do. They try to change the subject.”

“That’s what they are supposed to do, yeah,” Lemon responded.

“Throw as much on the wall and see what sticks,” Tapper said.