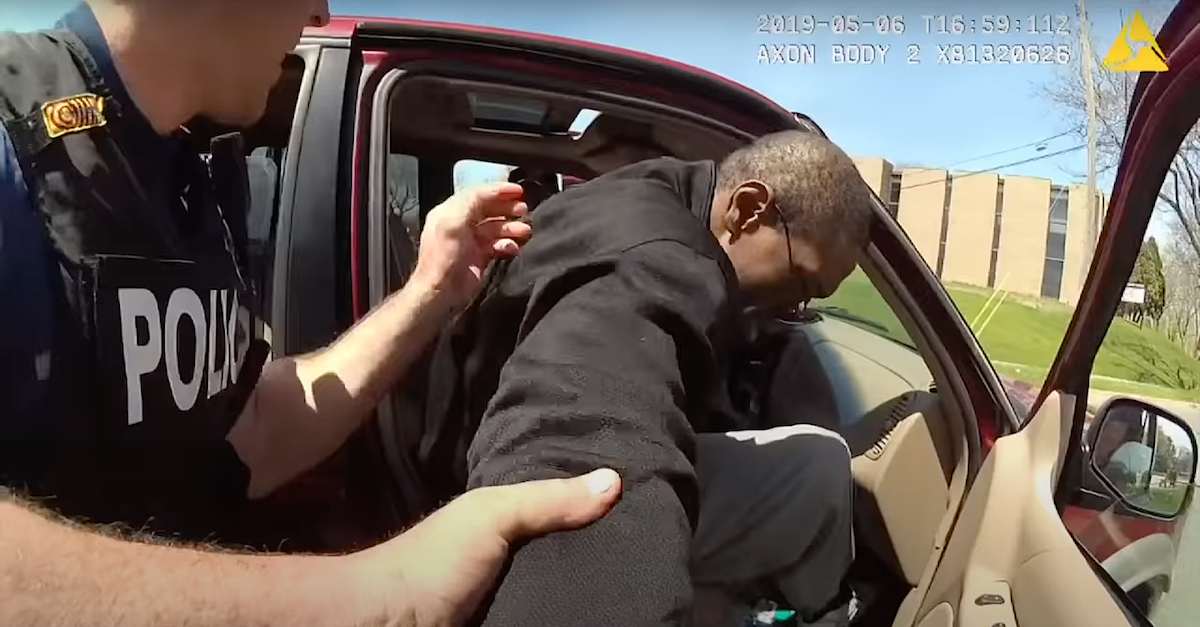 In an image captured from body camera video, a Minneapolis police officer removes George Floyd, Jr. from his SUV on May 6, 2019.

Judge Peter Cahill said jurors could see a portion of a police body camera video recorded in 2019 because it was “relevant to the defense theory on cause of death.”  The portion of the video the judge will allow starts when a police officer approaches Floyd’s car and ends when Floyd is handcuffed.  (The full video shows subsequent interactions.)  Cahill will also allow a photo of “pills in the crack between the seat cushion and back cushion of the passenger seat” of Floyd’s car.  Finally, the judge will allow Floyd’s blood pressure readings and other statements Floyd made in search of a medical diagnosis after the 2019 stop.

However, Cahill ruled that Floyd’s behavior after police approached him on May 6, 2019 was not admissible because it was not relevant.  Cahill said statements by the police pertaining to Floyd’s suspected drug use were also not relevant.

Bottom line:  the judge concluded that Floyd’s attempt to conceal drugs in 2019 was important to the core question of whether Floyd was murdered.

“What is relevant in the May 6, 2019 case that goes to cause of death or medical condition is essentially the video of the body worn camera . . . from the time the one officer approaches Mr. Floyd on the passenger side of the vehicle, the subsequent behavior with regard to eating drugs — or not — [and] his delay in complying,” Cahill said.

“Again — when we get into resisting or complying, I don’t think that’s of any consequence.  It is delaying compliance; allowing him to inject drugs” that was relevant, the judge added.

A paramedic called to treat Floyd can also testify about what Floyd said regarding wither he ingested drugs on May 6, 2019.  Those statements by Floyd to the paramedic fall squarely within an exception to the rule against hearsay.  The exception allows evidence to come into a trial if it is uttered in an attempt to secure a medical diagnosis.  The rules of evidence presume that people will not lie to their doctors when seeking medical treatment and, therefore, that statements made in order to secure medical treatment are inherently reliable.

The judge also will allow testimony from a paramedic that Floyd suffered a “hypertensive emergency” based on blood pressure readings on May 6, 2019 and needed to go to the hospital right away.  The judge will not allow testimony that Floyd was violent. 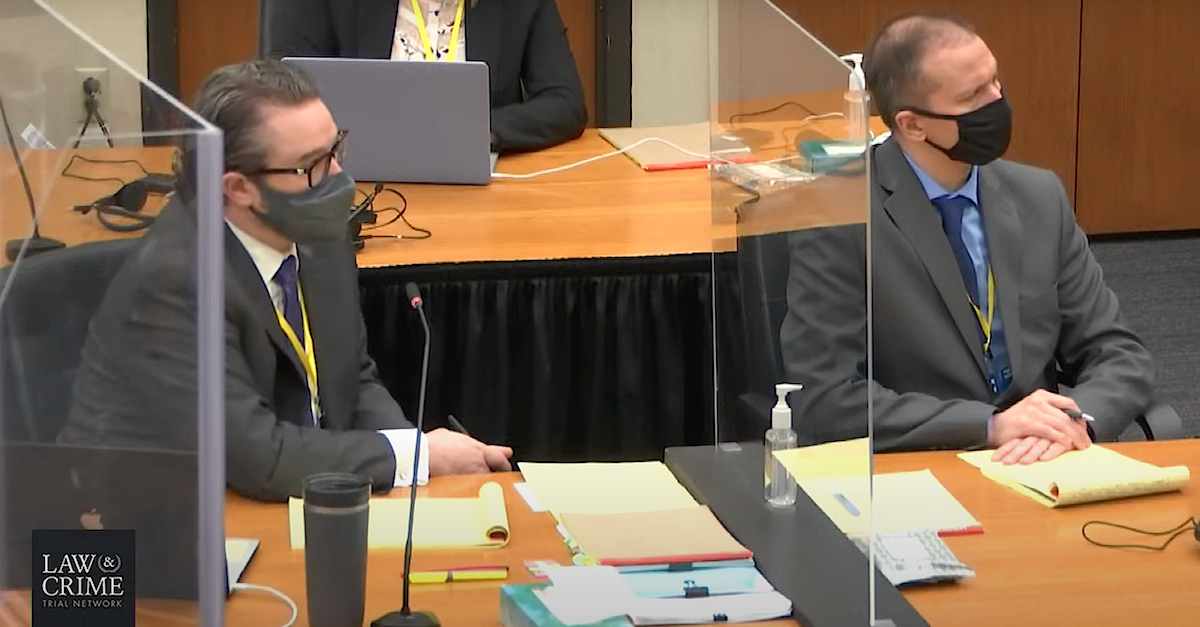 “The whole point here is we have medical evidence of what happens when Mr. Floyd is faced with virtually the same situation” he faced when Chauvin and others confronted him one year later:  “confrontation by the police at gunpoint followed by a rapid ingestion of some drugs,” Cahill said.  “We don’t know exactly how many, but there was an admission he had done it at the time of the stop.  That is medical evidence.”

“The May 6, 2019 case is only relevant to that extent,” Cahill continued.  “Mr. Floyd’s emotional behavior, calling out for his mother — all of that is not admissible because the emotional behavior and state of mind [are] not relevant.  The May 6, 2019 evidence is only admissible for the relevant purpose . . . as an example of Mr. Floyd’s bodily reaction — his physical symptoms upon being confronted in almost the exact same situation.”

“Clearly, there’s a cause of death issue here; in fact, it is highly contested,” the judge noted with regards to Chauvin’s trial.

Cahill stated the analysis from the perspective of Floyd’s May 25, 2020 interactions with Chauvin and three other officers.

“The fact that we have cardiac involvement and hypertensive heart disease leads me to question whether there is anything from the May 6, 2019 case that is relevant on the issue of medical condition or the mechanism of death, because that seems to be the primary issue:  what is the mechanism that caused the cardiac arrest or cardiac arrhythmia [in 2020] depending on which expert you talk to,” Cahill said.

“Is there any medical evidence that would contribute or be probative as to cause of death?” the judge asked rhetorically before answering his own question.

On the date Floyd died, there “is a very similar starting situation” in what occurred almost exactly one year earlier on May 6, 2019, Cahill noted.  In both incidents, a police officer approached Floyd, drew a weapon, and was met with a similar reaction from Floyd.

“There is also evidence of drug concealment upon being stopped by the police — basically, concealment by ingestion — in other words, that he was eating and otherwise hiding drugs,” Cahill said.  “On May 25, there’s evidence of that from a white object of some sort being seen in a photograph from a video grab; there’s a pill in the back seat of the squad that he was ultimately taken to.” 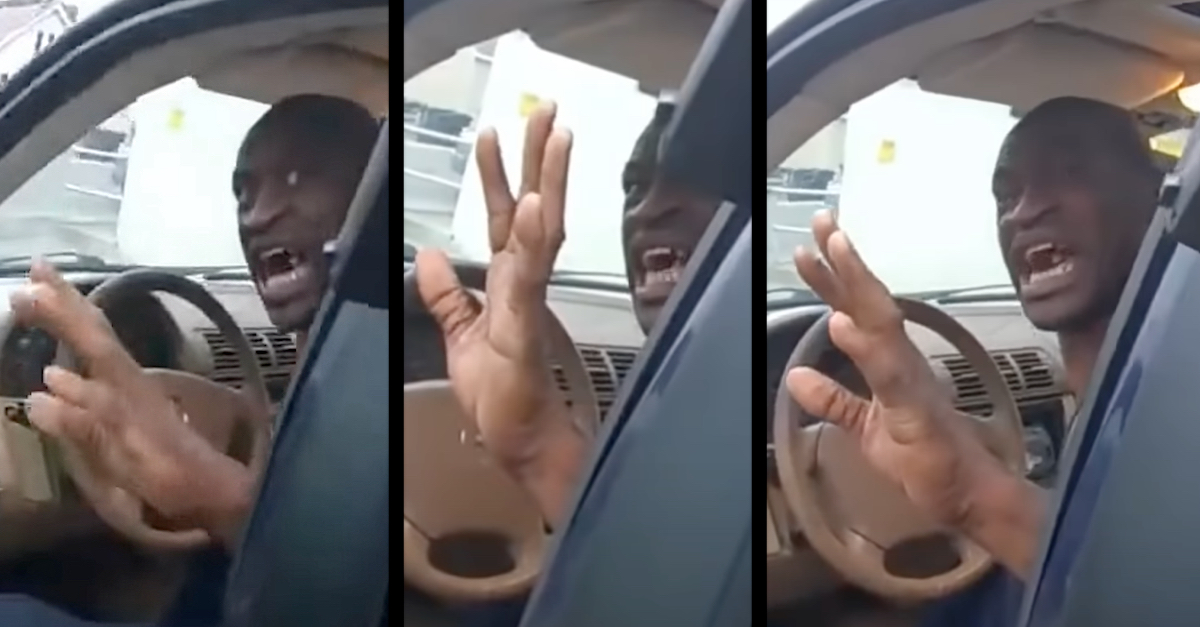 These images taken from Officer Thomas Lane’s body camera video show what Derek Chauvin’s defense attorney believes is a pill in George Floyd, Jr.’s mouth. Lane was pointing a gun at Floyd when these images were taken.

Cahill noted that the pill recovered from the squad car Floyd was dragged through on May 25, 2020, was later tested. It was found to contain both “Mr. Floyd’s DNA and saliva,” Cahill said.

He further noted Floyd’s autopsy identified the presence of both fentanyl and methamphetamine.

The defense theory is that a drug toxicity contributed to his death, Cahill recapped; however, he said Floyd’s “emotional behavior” was “not relevant” to the cause of death analysis.

Chauvin’s defense had requested that the judge allow evidence of the 2019 incident into the upcoming trial.

The judge also refused to pause the proceedings or to move the trial to another venue.

“I don’t think there’s any place in the State of Minnesota that has not been subjected to extreme amounts of publicity on this case,” he noted.

While he agreed that the pretrial publicity has been extensive and, indeed, has harmed the defendant’s image, he disagreed that a fair and impartial jury could be more easily found in another location.

Video of the May 6, 2019 incident is below.  The recording shows officers ordering Floyd to keep his hands on his SUV’s dashboard.

“He keeps moving his hands around!” one officer says to another.

Officers then order Floyd to put his hands on his head.

Minnesota Attorney General Keith Ellison (DFL) reacted favorably to the judge’s order refusing to delay or move the trial. However, in a statement, the A.G. was noticeably silent about the more salient ruling involving Floyd’s 2019 police encounter.

“The court correctly ruled against a continuance and change of venue,” Ellison said. “The court has taken careful, considered steps to mitigate the effects of pre-trial publicity that make a continuance and change of venue unnecessary. A week ahead of schedule, both sides have now agreed on 12 jurors, more than half of whom were selected since early last Friday afternoon and all of whom have been carefully screened for impartiality in the face of inevitable pre-trial publicity not only in Hennepin County, but in every part of Minnesota.”

“As we have said throughout, the state has been and is ready to proceed to trial on schedule,” he continued. “We look forward to presenting our case against Mr. Chauvin on the charges of 2nd- and 3rd-degree murder and 2nd-degree manslaughter in the death of George Floyd to a fair and impartial jury in Hennepin County.”

Watch the judge issue his ruling in the player below:

Update (March 25, 2021):  The judge issued a written order memorializing his earlier oral decision from the bench.  It is embedded below.

Derek Chauvin 404(b) Eviden… by Law&Crime

Editor’s note:  this piece, which began as a breaking news report, has been substantially updated since its initial publication and edited for clarity.