‘His Answers Were Not True’: Senate Dems Accuse Brett Kavanaugh of Lying About ‘Stolen’ Docs 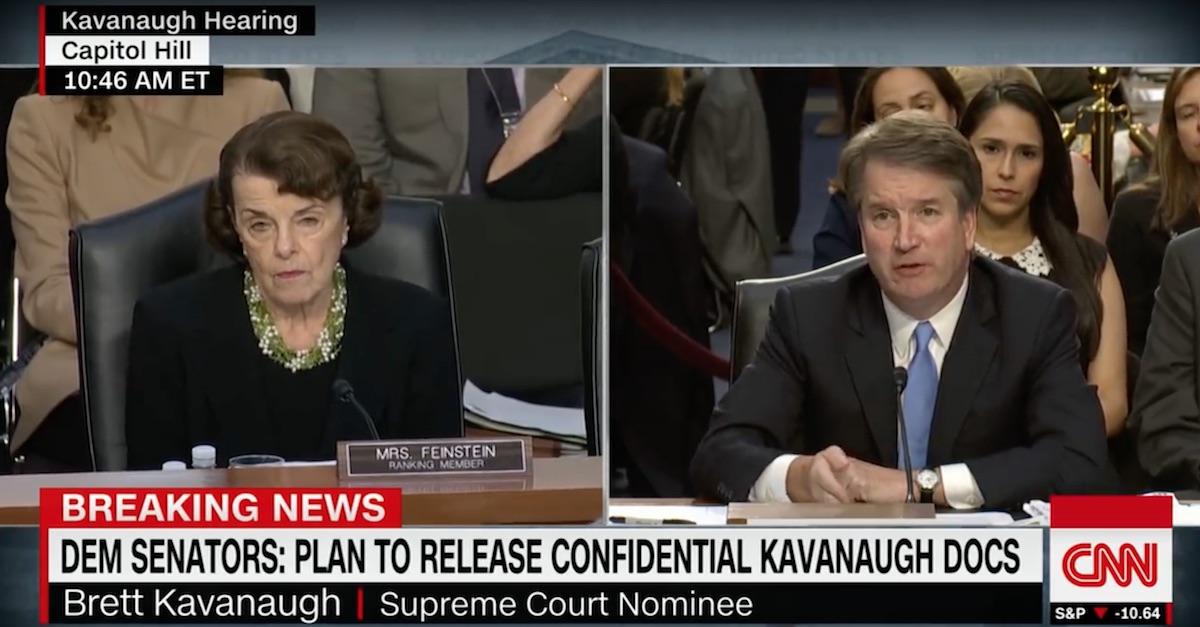 Brett Kavanaugh used materials stolen from Democratic senators to advance President Bush's judicial nominees. He was asked about this in 2004, 2006 and this week. His answers were not true. https://t.co/YNYOyJUiDC

The fundamental claim of that piece is that Kavanaugh should be “impeached, not elevated” — not because he received the “stolen” docs, but because he lied about receiving them time and again. Per Slate:

Kavanaugh received confidential memos, letters, and talking points of Democratic staffers stolen by GOP Senate aide Manuel Miranda. That includes research and talking points Miranda stole from the Senate server after I had written them for the Senate Judiciary Committee as the chief counsel for nominations for the minority.

Receiving those memos and letters alone is not an impeachable offense.

No, Kavanaugh should be removed because he was repeatedly asked under oath as part of his 2004 and 2006 confirmation hearings for his position on the U.S. Court of Appeals for the D.C. Circuit about whether he had received such information from Miranda, and each time he falsely denied it.

In other words, Graves believes Kavanaugh should be impeached for perjuring himself.

A couple of defenses of Kavanaugh are now floating around out there. Ed Whelan, the President of the Ethics and Public Policy Center, called the Slate piece a “smear.”

Let's take a brief look at this Slate smear of Judge Kavanaugh: "I wrote some of the stolen memos that Brett Kavanaugh lied to the Senate about." https://t.co/FM2SZwXJcr via @slate 1/

“See ‘spying’ email here,” he said. “On its face, it has zilch to do with docs obtained by Miranda. So much for what Slate author considers her strongest evidence.”

He said there was “zero evidence” Kavanaugh received the documents.

“The most you can claim is that emails sent by Miranda contained info from those docs–but there is no reason to think that K would have known that,” he said. He then referred to the David Lat thread below, who said he “refuted ‘perjury’ claims.”

1. After I refuted "perjury" claims against Judge Kavanaugh re: his testimony on the Pryor nomination, some asked about the claim that Kavanaugh perjured himself re: #Memogate. So here goes. #SCOTUS #KavanaughHearings #KavanaughConfirmationHearings

Lat, a lawyer and founder of the legal blog Above the Law, also said that there’s “no evidence, in recently released emails or elsewhere, showing Kavanaugh had knowledge of Miranda’s acts. To the contrary, Miranda told @NYTimes & @WashingtonPost that Kavanaugh ‘had no knowledge.'”

Finally, Lat said the the word “stolen” should be put in quotes because legally speaking no theft occurred.

“The files were on a shared server – Repubs could access Dem files, and vice versa – so the ‘stealing’ was really exploiting a glitch,” he said. “But legality aside, it was unethical and wrong.”

Feinstein was joined by Sen. Patrick Leahy (D-Vermont) in opposition to Kavanaugh on grounds of untruthfulness.

“Untruthful testimony, under oath and on the record,” he said.

Untruthful testimony, under oath and on the record. https://t.co/ngXLaZ5Is1

Kavanaugh’s testimony about these documents was mentioned by the Times to support its overarching claim about the SCOTUS nominee’s trustworthiness:

In that 2004 hearing and again in 2006, when he was being considered for a seat on the federal appeals court in Washington, D.C., Mr. Kavanaugh told Congress, under oath, that he knew nothing about the extensive theft of secret strategy documents from Democratic senators’ computers by Republican staffers. As it turns out, he did in fact receive those documents or summaries of them. But he now claims that he had no reason to believe that they had been stolen, even though one email he got had the subject line “spying” and began, “I have a friend who is a mole for us on the left.”