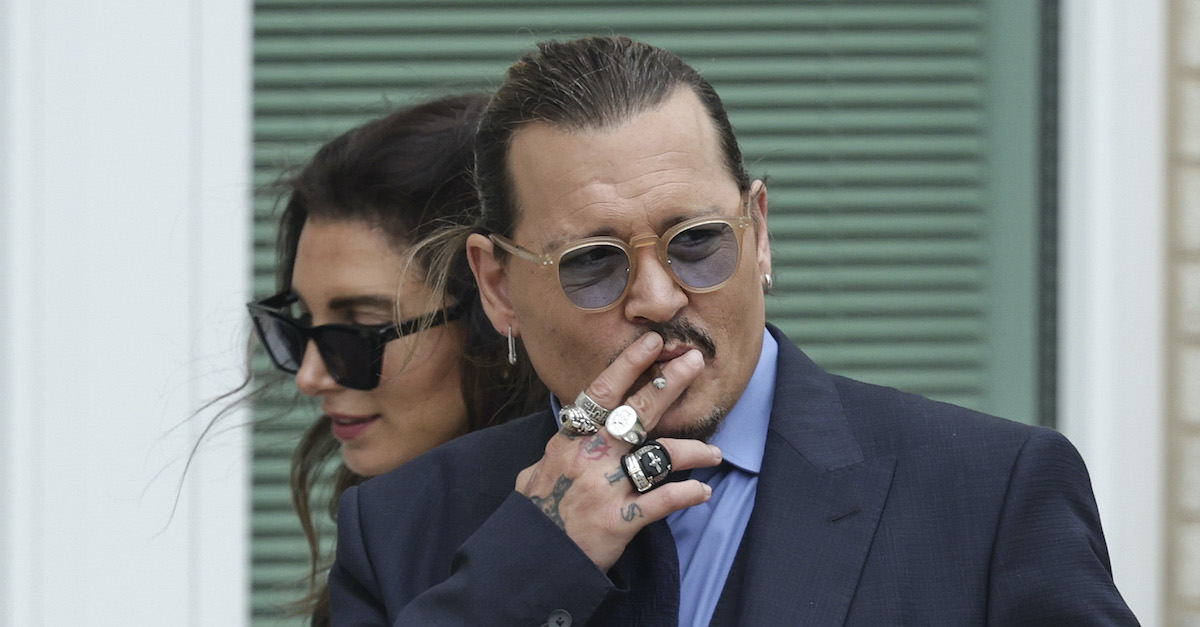 Actor Johnny Depp smokes during a break in his trial at a Fairfax County Courthouse on May 27, 2022 in Fairfax, Virginia.

Johnny Depp has signaled plans to settle a lawsuit filed by a crew member who claimed actor punched him on the set of City of Lies in 2017.

The terms of the deal are not public, and Depp’s press representative declined to comment to Law&Crime. Brooks’ lawyer Arbella Azizian, who filed notice of the settlement on Monday, did not immediately respond to Law&Crime’s press inquiry.

Deadline noted that the development fell two weeks to the day before their anticipated trial.

As previously reported on Law&Crime, Brooks alleged that Depp wanted a permit for filming at the Barclay Hotel in Los Angeles extended. According to the complaint, a final extension was granted but a final shot that evening outside of the hotel would have to be the last at 10:50 p.m.

Furman allegedly told Brooks, “why don’t you tell that to Johnny Depp!”

Brooks claims that instruction set the stage for the incident. He said that even approaching an on-set Los Angeles Police Department officer to assist him in passing on the bad news did not avert Depp’s alleged rage over the restriction.

“Who the fuck are you?” Depp told Brooks, according to the complaint. “You have no right to tell me what to do!”

Depp allegedly punched Brooks “twice in the lower left side of the rib cage” and yelled: “I will give you $100,000 to punch me in the face right now,” the Pirates of the Caribbean star’s breath reeking of alcohol, according to the lawsuit.

California Superior Court Judge Holly Fujie scheduled a non-appearance case review regarding the dismissal after settlement on Feb. 16, 2023. If a formal dismissal is not filed prior to Feb. 9, 2023, Brooks will have to file an explanation explaining why the case should not be dismissed. Those deadlines give the parties plenty of time to formalize and finalize the contemplated settlement.

The Brooks matter is the second case on Monday where Depp sought to put high-profile litigation behind him.

Earlier on Monday, Depp’s attorneys Benjamin Chew and Camille Vasquez asked a judge to reject what they described as his ex-wife Amber Heard’s “desperate” arguments that a juror inappropriately landed on the panel. They said that the assertions amounted to “pure speculation.”

Heard is hoping to overturn a jury’s $10.35 million verdict in Depp’s favor regarding her 2018 Washington Post op-ed describing herself as a “public figure representing domestic abuse.” That judgment had been reduced from an initial $15 million verdict because Virginia law caps punitive damages at $350,000. The Post editorial did not mention Depp by name, but Depp sued under the doctrine of defamation by implication.

The jury also granted Heard a $2 million award over comments by Depp’s attorney Adam Waldman asserting that she and her friends effectively framed her ex-husband by calling 911 and summoning first responders to his penthouse on May 21, 2016.