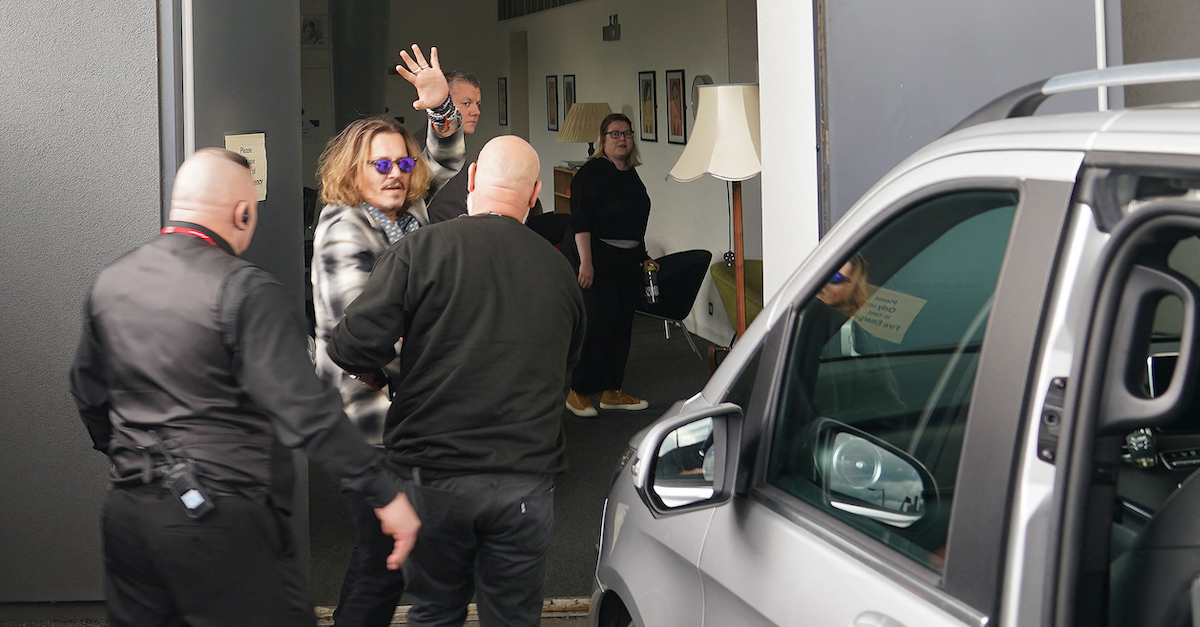 U.S. actor Johnny Depp waves upon arrival at the Sage Gateshead venue, in Newcastle-upon-Tyne, north east England, on June 2, 2022 to appear on stage with British guitarist and musician Jeff Beck.

Actor Johnny Depp branded his ex-wife Amber Heard‘s request to set aside his $10 million verdict against her is a “desperate” move based “pure speculation” about a juror. His lawyers urged the judge to reject Heard’s claim that the juror was not actually the person who was summoned for jury duty.

Heard’s motion, filed July 1, said that the judgment was excessive and not supported by evidence, particularly Depp’s claim that he suffered financial loss after Heard published an op-ed in the Washington Post stating that she became a “public figure representing domestic abuse.” Depp was not identified in the piece. Heard followed that motion up with a supplemental filing on Friday in which she claimed that newly-discovered information about a juror in the case suggests she was deprived of due process.

“While Ms. Heard slings an exceptional amount of mud at the wall in the hope that something might stick, the jury’s verdict on damages was perfectly reasonable and supported by the evidence and testimony in this case,” Depp’s lawyers say in his response to Heard’s motion to set aside the verdict.

In fact, Depp’s lawyers argue, the one-time Pirates of the Caribbean star suffered significantly more damages than what the jury ultimately awarded him.

“[T]he evidence shows Mr. Depp was actually entitled to far more than the $10 million awarded,” the motion says. “That the jury awarded only $10 million to Mr. Depp, after Mr. Depp presented evidence of damages several times that amount, renders untenable Ms. Heard’s argument that the jury failed to consider other potential sources of damage to Mr. Depp’s reputation or career[.]”

Noting that Depp didn’t request damages “for anything other than the statements in the Op-Ed,” and insisting that the jury instructions were clear, Depp’s lawyers said that Heard’s arguments “are based on nothing other than pure speculation.”

Depp’s lawyers also argued that it doesn’t matter that Heard didn’t identify their client by name in her op-ed.

“Ms. Heard made a very calculated effort in crafting the language of the Op-Ed to try to avoid an explicit defamatory reference to Mr. Depp (while clearly referencing him implicitly),” the filing says. “She should not be able to skirt liability stemming from the devastating impact of her Op-Ed simply by carefully choosing her words so as to convey a defamatory meaning about Mr. Depp but without actually using his name.”

According to that supplemental filing, lawyers for Heard said that they discovered information about “Juror 15.” The juror who served, Heard says, was not the juror who was summoned.

Depp’s lawyers responded that the information about the juror wasn’t actually new.

“True to form, Defendant neither notified Plaintiff of her forthcoming Supplemental Memorandum nor sought leave of Court for filing it one full week out of time,” Depp’s filing said.

“In a rare moment of candor, Ms. Heard admits that she was aware of the purported discrepancy in Juror 15’s birth year from the very start of trial because ‘Juror 15 … was clearly born later than 1945,'” Depp’s motion says, quoting part of Heard’s supplemental filing. “Ms. Heard therefore concedes that she had more than enough time before the trial started, and during the six-week trial, when at least two alternates were available, to investigate and discover the alleged ‘new’ facts. Clearly Ms. Heard waived any right to allege new ‘facts’ she chose not to investigate for so long, much less to demand the extraordinary remedy of a mistrial.”

Depp’s lawyers also argue that even if the juror who served wasn’t the same as the juror who was summoned, Heard did not prove that she was prejudiced in any way by the switch.

“Even assuming arguendo that Ms. Heard’s latest thesis, i.e., that a son served instead of his father, there would be no prejudice, as Juror 15 was qualified to serve as a juror in Fairfax County and was vetted by the Court and the parties’ counsel just as all of the other jurors were,” Depp’s motion says.

Depp’s lawyers noted that Heard seems to have “abandoned her prior baseless assertions” that jurors violated their oaths by watching social media during the trial, which she says influenced their verdicts.

“Disgraceful that Ms. Heard made such scandalous allegations, and disappointing that no apology and recantation followed,” lawyer Benjamin Chew wrote in a footnote of the motion.

Heard’s press representative did not immediately respond to Law&Crime’s request for comment.

(Photo by STR/AFP via Getty Images)