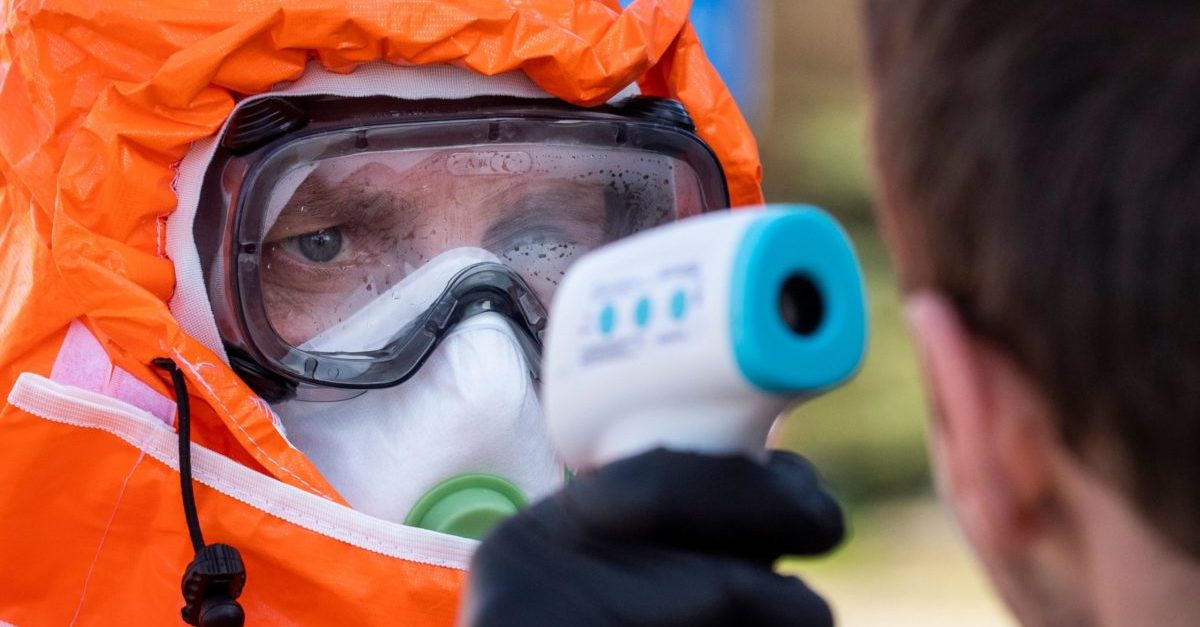 The COVID-19 Coronavirus is new, but the law books of the federal government and of all fifty states have for decades contained sections on quarantine and isolation. The new virus may prove to be an interesting test of these laws, some of which have not been updated in 80 years or more, a Law&Crime analysis shows.

Our review has examined the statutes of most of the 50 states. The statutes generally bestow upon some government actor (be it a governor, a health department, or local official) some authority to take some quarantine or isolation action in the event of some qualifying public health emergency. From there, however, the laws become quite distinct. The laws of the various states are at times comforting; at other times they are dated, unsettling, unsympathetic, bizarre, and downright baffling.

Any law student or lawyer who has completed a 50-state survey is accustomed to finding both gemstones and manure scattered through a dusty field of otherwise monotonous pure factual classification.

Ohio appears to have interesting priorities. While Ohio specifies some penalties for people who break quarantines and thus potentially spread a pandemic, it also went through the trouble of passing a special law just for companies which employ undocumented immigrants diagnosed with contagious diseases. Under Ohio Rev. Code. § 3707.15, “[a]ny person that employs an alien who is not legally present in the United States and has a contagious or infectious disease contracted before or during employment shall pay to the municipal corporation, township, or county in which the alien is employed any expense caused by the contagious or infectious disease.” While the law may have contemplated simple medical expenses at a county hospital, one wonders how far “any expense caused” might be used in the case of a global pandemic. It could add up to a lot of money. This law has been on the books since June 1999. Law&Crime could not locate any court cases which interpret it.

Massachusetts took the bold step of protecting workers in a public health crisis. When a “resident wage earner” is quarantined, Massachusetts law allows that person to receive “three-fourths of his regular wages” from the government. That sounds great, except that there’s a $2.00 per working day cap on those wages. Mass. Gen. Laws ch. 111 § 95G. The law as it exists today has been on the books for a century. In 1938, a poor plaintiff was barred by a court from receiving his two dollars a day because his dairy business did not qualify him to be a “wage earner” under the law. That case cites the 1932 Tercentenary Edition of the Massachusetts General Laws, so the verbiage of the law is at least that old; we also found the same exact language which remains on the books in the year 2020 dating back to a 1922 publication which cites the year of adoption as perhaps as far back as 1907. True to form, Massachusetts remains quaint, but remember: the state probably needs to offset all of those free 1980s vacation kits (wicker chairs, a picture from our past, the Old North Church). It’s a “a spirit that we want to share with you” (on a paltry replacement salary).

California’s communicable disease law authorizes state health officials to go on a Supermarket Sweep of sorts: they have access to “all supplies necessary” from health providers to combat an outbreak. The takings clause implications of this are unclear. California health officials also have the authority to disinfect or even destroy personal property to contain an outbreak. Cal. Health & Safety Code § 120175-120250. Ohio law allows the same; it also explicitly provides compensation for those whose property is destroyed.

While we’re back on Ohio … note that your neighbors will likely know if you’ve caught anything which might endanger the public. Officials there are in some cases required to adorn your house with the Scarlet Letter, eh, uh … a “placard” announcing your status as an infected person:

When persons have, or are exposed to, a communicable disease for which placarding of premises is required by the board or the department the board shall at once place in a conspicuous position on the premises where such a person is isolated or quarantined a placard having printed on it, in large letters, the name of the disease. No person shall remove, mar, deface, or destroy such placard, which shall remain in place until after the persons restricted have been released from isolation or quarantine.

Ohio law also explicitly deals with the issue of prison inmates contracting contagious diseases and contemplates free public vaccinations. Where might Ohio locate an emergency quarantine center or hospital?  In a “suitable vacant house,” of course.

Alabama can even investigate you and quarantine you against entering its borders no matter where you are: “Should permission for [an] investigation into the nature of the disease . . . be refused by the authorities of any place outside of this state, such refusal will constitute ground for declaring quarantine against such place.” Ala. Code § 22.12.7 (emphases added). Authorities in Alabama can also arrest someone without a warrant who violates a quarantine order. Ala. Code. § 22.12.26. Alabama law continues on with a strange passage which appears to contain a host of ‘scout’s honor’ provisions for coming and going from a quarantine area:

Any person who makes affidavit before a quarantine officer or guard, engaged in enforcing quarantine for the protection of a place which said person wishes to enter, and who furnishes such other evidence as may be prescribed by the State Board of Health that he has not, since the appearance of a quarantinable disease then existing, been in any place against which quarantine has been legally proclaimed shall be permitted to enter, or remain in, the place to which he desires to go. Any person who has been in a place then under quarantine, by the authority of the state or by that of a county, city or town with the approval of the State Board of Health, and who has since complied with the requirements as to detention and disinfection, one or both, prescribed or approved by the State Board of Health and who shall make affidavit thereto and furnish such other evidence thereof as said board may prescribe or demand shall be permitted to enter or remain in any place in this state. Ala. Code § 22-12-29.

New Hampshire predicted a scenario in which a corporation — not an individual human being — breaks a quarantine and must be held responsible. While individuals who violate quarantine are guilty of a misdemeanor, corporations and other unincorporated associations (i.e., partnerships) can be convicted of felonies for the same behavior. N.H. Rev. Stat. Ann. § 141-C:21.

In some states, contributing to a public health crisis by thumbing your nose at a quarantine or isolation order carries a penalty which seems somewhat on the level of jaywalking or spitting on the sidewalk rather than contributing to a public health crisis. Montana and New Jersey impose fines of between just $10 and $100 for those convicted of breaking quarantine. Many states, such as Hawaii and Nevada, don’t even name specific penalties in their quarantine statutes. A failure to comply is simply “a misdemeanor.” (Determining how much trouble an offender might be in requires a jump to each state’s criminal code: Hawaii misdemeanors are punishable by up to one year in jail and a fine of up to $2,000; Nevada misdemeanors carry a sentence of up to six months and a fine of up to $1,000).

By contrast, other states have chosen far harsher penalties. Vermont, known for statewide incarceration reform initiatives, will still try to jail you for six months and fine you $5,000 for “knowingly” violating a quarantine. Anyone in Vermont who actually spreads “a contagious disease beyond the quarantine zone” can be imprisoned for up to two years and fined a whopping $15,000. In Alaska, breaking a quarantine could result in a jail sentence of up to one year and a $10,000 fine. In Mississippi, anyone who “knowingly and willfully violates” a quarantine order can be fined up to $5,000 and imprisoned up to five years — or both. (Miss. Code Ann. §§ 41-23-1, 41-23-2.) Maryland isn’t far behind. There, the fine for individuals is $3,000, and it is coupled to a possible one-year sentence. Maryland law also contains fines for any doctor who “fails to comply” with an emergency health “order, regulation, or directive.”

Critics of harsh punishment might argue that few, if any people, have been prosecuted under these laws, since most human beings agree to treatment which seeks to preserve their own health and save their own lives. Yet a chorus of don’t-take-away-my-freedom nay-sayers on social media proves the point that not everyone will avoid social interaction in the name of public health.

CARING FOR QUARANTINED OR ISOLATED PATIENTS

While some state statutes barely define what facilities and premises are suitable for a “quarantine” (that’s where you’re kept if you’ve been exposed to a contagion) or for an “isolation” (generally, where you’re housed if you’re actually infected), other state statutes contain strict definitions of both terms and require legally-mandated provisions for the comfort of individuals actually quarantined or isolated.

Connecticut law goes further, however, by stating that patients can be ordered to remain in “private homes or other private or public premises” — so long as public health is not jeopardized. Connecticut law requires that anyone quarantined or isolated must be “monitored frequently” and must be afforded “means of communication” with the outside world. “[C]ultural and religious beliefs shall be considered” in a confinement. “Family members and members of a household shall be kept together, and guardians shall stay with their minor wards.” Connecticut law might be summarized as patient-friendly by comparison with the laws of many other states. Conn. Gen. Stat. § 368a-19a-131b.

There is considerable disagreement among the states on just how much power to give government actors in the time of a pandemic and just who should wield the power given. Some state legislatures grant surprisingly broad authority to health departments in times of public health crisis. Indiana law authorizes just about anything: its Department of Health may establish a quarantine, as well as doing “what is reasonable and necessary to prevent or suppress disease.” Ind. Code § 16-19-3-9. Similarly, under Kentucky law, the authorities can “take such action and adopt and enforce such rules and regulations as it deems efficient in preventing the introduction or spread of such infectious or contagious disease.” Ky. Rev. Stat. § 214.020. Meanwhile, Alabama appears to let people come and go from a place under quarantine protection as they please, so long as they say they’re okay. New Mexico allows people to refuse testing and treatment, but if they do, they’re mandatorily quarantined. N.M. Stat. Ann. §§ 24-1-15; 12-10A-8.

New Mexico provides civil immunity to those who make reports against others in good faith. Civil penalties are authorized for “negligent or intentional reporting of inaccurate information” that someone suffers from a communicable disease.