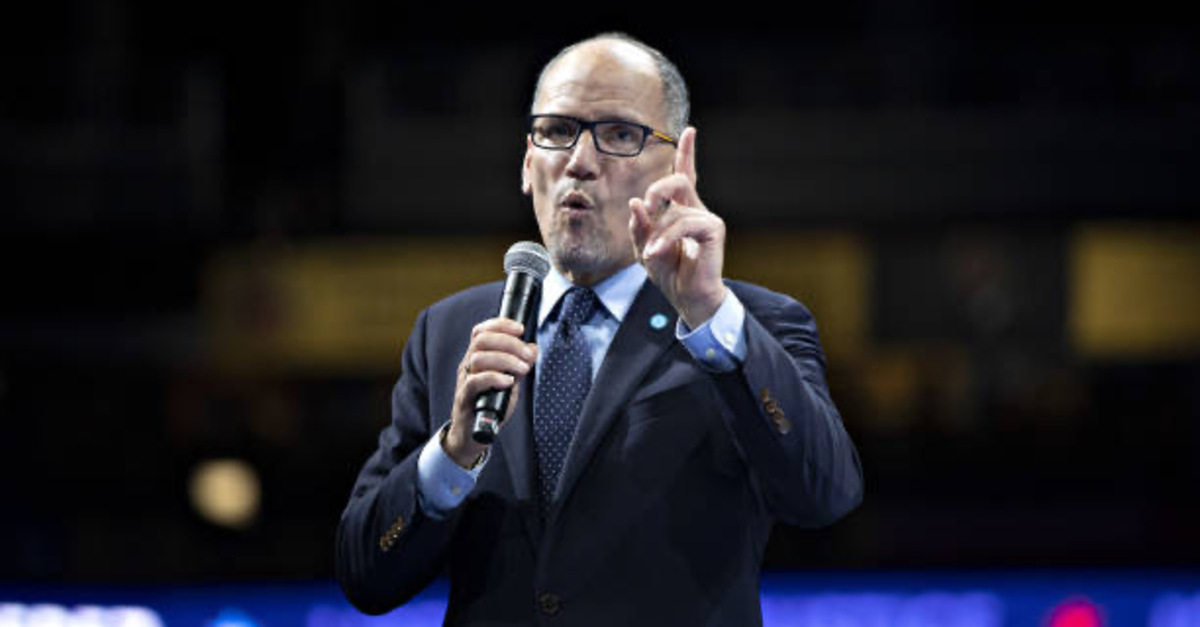 The Democratic National Committee (DNC) want voters to show up and vote—the novel Coronavirus (COVID-19) be damned. Some states, however, are bucking that advice and postponing in-person voting until scientists and the government have a better handle on the snowballing deadly pandemic.

DNC Chair Tom Perez et al., however, are threatening to sanction those postponing states with reductions in their delegates awarded—by up to 50 percent of their previously allotted delegate totals. That’s if primaries are delayed past June 9.

For several days, the CDC has increasingly shrunken the numbers deemed acceptable for such gatherings—beginning with triple digit limits in areas where an “outbreak” occurred.

The numbers deemed safe swiftly dwindled as scientists, epidemiologists and other public health professionals came to understand more about the virus and the way it spreads.

On Monday, the CDC made a major revision:

In turn, Ohio joined Georgia, Louisiana and Kentucky in moving their votes forward by a few weeks.

An internal DNC memo obtained by The Guardian outlines the party’s potential reprisals for states who take forward-thinking precautions in line with public health guidance from the federal government.

The Delegate Selection Rules provide that each state’s first determining step must take place by 9 June. If a state violates the rule on timing, or any other rule, they could be subject to penalties as prescribed in Rule 21, including at least a 50% reduction in delegates, which will need to be reviewed by the [Rules and Bylaws Committee]. The deadline to elect convention participants is 20 June, so state parties should have plenty of time to elect their delegates, alternates and standing committee members.

In party parlance, “determining step” is the term for presidential primary.

Authored by Rules and Bylaws Committee Co-chairs James Roosevelt and Lorraine Miller, the memo was released to DNC members last Wednesday night, according to the London-based outlet.

“We are working with state parties that need to make adjustments as needed to their delegate selection processes so they can continue without major interruptions,” the memo notes. “The regulations allow technical changes to be approved by the co-chairs.”

“The deadline to elect convention participants is 20 June, so state parties should have plenty of time to elect their delegates, alternates and standing committee members,” the memo notes—setting a hard limits on states who might deign to abide by CDC guidance.

A typical polling station will handle somewhere between hundreds and thousands of voters per day—with urban polling locations tending toward much higher numbers. Such realities necessarily put in-person voting in direct tension with CDC Coronavirus advice.

Exacerbating the potential public health catastrophe from Tuesday’s voting is the fact that numerous polling sites in states like Illinois and Arizona have recently been shuttered.

Additionally, election workers in all voting states are refusing to work due to Coronavirus concerns.

762 poll workers, including ones at my precinct didn’t show up, and my family wasn’t allowed to vote. The amount of people who won’t be able to vote today is alarming. This election needs to be postponed. #FloridaPrimary

Msg from IL poll worker: “I’ve worked Election Central for the Chicago Board of Elections for several years on Election Day. This has been the busiest, worst day ever. No breaks, constant calls, weird, strange & Coronavirus bases in majority of calls”

Our Governor has failed us.

Election workers who did show up complained of generally inadequate help across the board—including the provision of absolutely necessary cleaning supplies.

Voters now showing up and we have to explain that we don’t have the supplies for them to vote. Still no cleaning supplies. Off to a great start🙃🙃

Just received cleaning supplies: (for 11 hours worth of voters) pic.twitter.com/4UNkqJkhwa

But on Monday night, Perez insisted all was well while facing pushback from MSNBC host Chris Hayes:

I don’t understand why anyone besides a health expert in pandemics is deciding whether states should be voting in person tomorrow.

Who cares what @TomPerez thinks, what does Anthony Fauci think?! https://t.co/JH3hxcYw3a

The Democrats and Perez were pilloried from all sides for slogging through the fast-spreading contagion with a smile on their face.

Forcing people to the polls during a Pandemic or having them forfeit their right to vote takes Voter Suppression to gangster levels the GOP could only dream about. #FloridaPrimary #IllinoisPrimary #ArizonaPrimary

Actor, director and left-wing activist Tim Robbins also expressed his dismay at the Democratic Party’s apparent lack of concern for voters risking their health at the polls.

“What the hell is wrong with Tom Perez and the #DNC?” he asked via Twitter. “They look desperate. Remember this moment. The leaders of a political party and their chosen candidate are encouraging people to risk infection in the middle of a pandemic. Why? The answer reveals the beast.”

”Democrats demanding old people risk their lives to vote for Biden,” noted conservative attorney Robert Barnes via Twitter—highlighting the somewhat ironic fact that the party establishment’s preferred candidate is also the preferred candidate of voters over the age of 50–Baby Boomers—the age group considered most vulnerable to and most likely to die from a Coronavirus infection.

One Twitter user—and voter— summed up the collective mood of many in a viral video during which she described the precautions taken at polling locations as “dollar store brand hand sanitizer on the table.”

Amidst a swelling crescendo of criticism, DNC officials urged states that have yet to vote to increase polling times and to expand voting by mail and absentee balloting, according to the Associated Press. Many critics are likely to view those moves as too little, too late.