Can Trump Move 2020 Election Due to Coronavirus? | Law & Crime

No, Trump Can’t Legally Use Coronavirus to Move the 2020 Election and Stay in Office Longer 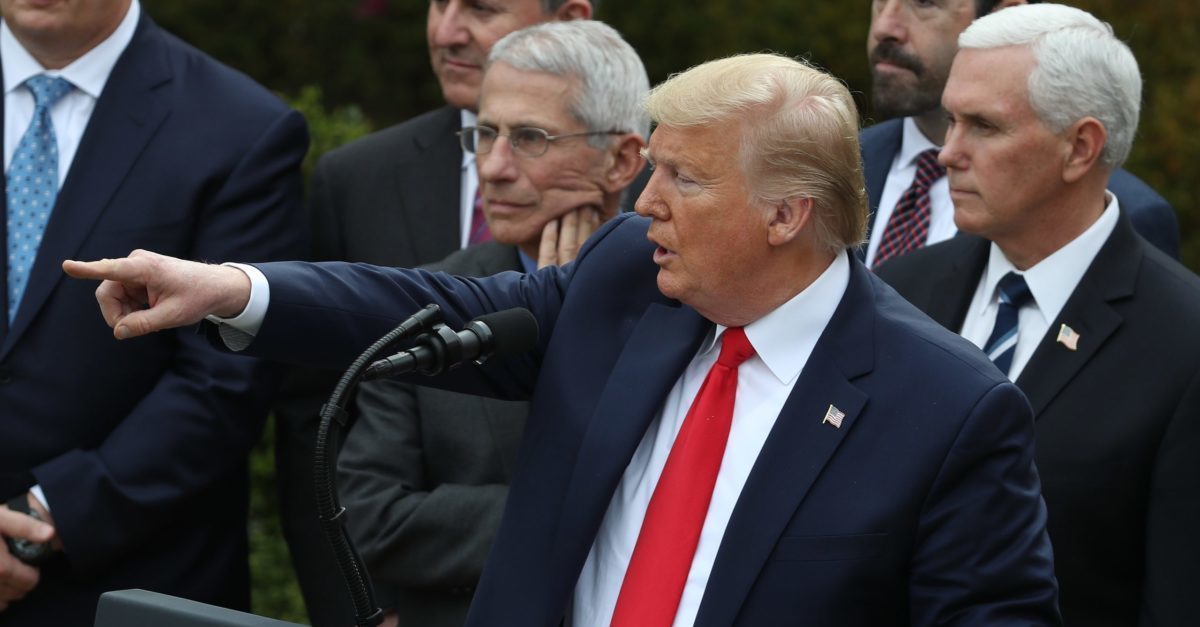 While you’re busy trying to figure out whether the sudden trend of #QuarantineAndChill means you should budget for the purchase of baby presents in, oh, about nine months, we’re contemplating the other viral matter du jour: can President Donald Trump use the Coronavirus to delay the November election and remain in office longer?  The answer, simply, is that no, he can’t.

The conspiracy theory was likely partially sprouted from the election-moving news of the day.

How long before President Trump suggests election delay might be necessary due to coronavirus? https://t.co/XEbCwTjpy1

Great Britain is debating whether to move its election. Louisiana was the first state to officially delay its presidential primary due to the Coronavirus pandemic. (Louisiana election law contains an “election emergency” subsection which allows the governor of that state to declare a state of emergency to “suspend or delay any qualifying of candidates, early voting, or elections.” From there, the secretary of state and the clerks of court [who serve as chief elections officers in local parishes] sort things out.)

As to the presidency, the law is clear. The 20th Amendment states without much room for ambiguity: “[t]he terms of the President and Vice President shall end at noon on the 20th day of January . . . and the terms of their successors shall then begin.” But, it goes on to contemplate that something might go wrong in the process of selecting who will hold office on that date:

Thus, the Constitution contemplates that if the entire election becomes a failure, Congress has the power to enact a law which determines who acts as president. As one 2003 law review article notes, “[t]he most likely scenario for a failure to qualify is an election controversy. The 1876 election, for example, was not fully resolved until just a few days before the Presidential term was about to begin.”  A coronavirus-like outbreak could, in theory, if severe enough, cause such a close call. The current Presidential Succession Act has been long debated, as the aforementioned law review explains:

This [Constitutional] language does not in any way limit the person whom Congress may specify to act as President.  The person specified to take over in the case of a failure to qualify need not be an “Officer” of the United States, nor does that person need to hold any position in the government at all.

Take, for example, the 2000 election. If the dispute over the Florida electors had persisted, and Congress was unable to resolve disputed sets of electors sent by the Supreme Court of Florida, the Governor, the State legislature, etc., the controversy might have lasted until Inauguration Day.  If the electors were not chosen in time for inauguration, House Speaker Dennis Hastert would have stepped in to act as President.

The law review author concludes that Hastert was next in line under the succession act. Let’s now walk through some of the relevant statutes.

3 U.S.C. § 1 facially does not provide much wiggle room for when the selection of “electors” (e.g., election day) will occur :

While 3 U.S.C. § 1 sets the tried-and-familiar early November date for presidential elections, § 2 yields to state legislatures should there be a hiccup in the process or a failure to hold an election:

Whenever any State has held an election for the purpose of choosing electors, and has failed to make a choice on the day prescribed by law, the electors may be appointed on a subsequent day in such a manner as the legislature of such State may direct.

Thus, the president does not control how the election proceeds: the states do. And, if there is a failure, 3 U.S.C. § 19 controls:

If, by . . . failure to qualify, there is neither a President nor Vice President to discharge the powers and duties of the office of President, then the Speaker of the House of Representatives shall, upon his resignation as Speaker and as Representative in Congress, act as President.

We have not undertaken a conflict of law analysis to determine whether some other presidential emergency declaration could throw a wrench into this process, but it seems rather iron-clad.

Since lots of people have asked me:

No, Trump cannot use his executive powers, even in a national emergency, to delay the November 2020 election. Only Congress can set the date of the presidential election.

And even if the election was delayed, Trump's and Pence's terms would still end at noon on January 20, 2021. If no election has been held by that point, the Speaker of the House would assume the powers of the presidency under the Presidential Succession Act. https://t.co/S0hQ7W1pyM