Turkey Is Not Immune from Trump-Era Lawsuit Against Erdogan’s Guards for Assault on Streets of Washington, Court Rules 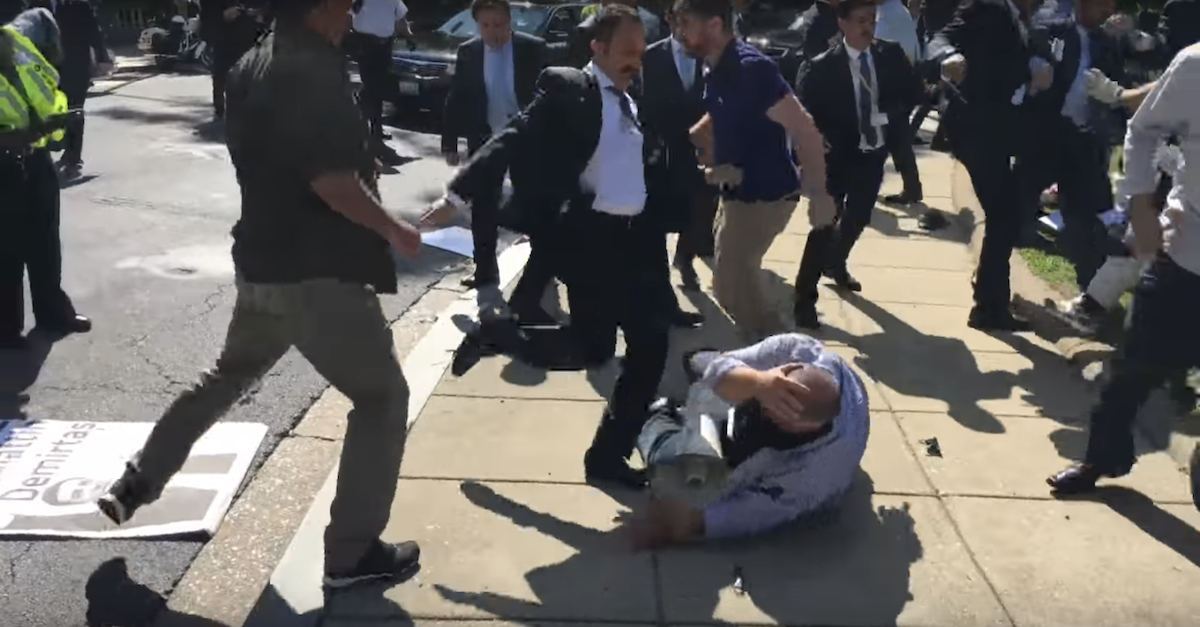 Protestors demonstrating against Turkish strongman Recep Tayyip Erdogan have sued Turkey for their assaults on the streets of Washington, D.C. in May 2017.

The Turkish government is not immune from a lawsuit brought by protesters suing strongman Recep Tayyip Erdoğan’s security detail for allegedly assaulting them on the streets of Washington, a federal appeals court has ruled.

Issued on Tuesday, the D.C. Circuit’s ruling reanimates one of the most highly publicized scandals in U.S.-Turkish relations during the Donald Trump era.

When Erdoğan first visited the Trump White House on May 16, 2017, protesters gathered outside of the Turkish Ambassador’s Residence and were besieged by the Turkish leader’s security detail. Voice of America broadcasts and other viral videos captured grisly scenes of guards punching, beating and kicking demonstrators, and the Trump White House stood silent in the face of the onslaught.

“The nature of the challenged conduct was not plausibly related to protecting President Erdoğan, which is the only authority Turkey had to use force against United States citizens and residents,” U.S. Circuit Judge Karen LeCraft Henderson, a George W. Bush appointee, wrote for a unanimous three-judge panel.

Summarizing what drove the demonstrators to protest Erdoğan, the panel noted: “They consider him a strongman who rules by decree, violates civil rights, illegally detains and tortures his own citizens and terrorizes Turkey’s Kurdish population.”

A lawyer for the protesters applauded the ruling, which affirms the lower court’s decision denying immunity to Turkey.

“The district court, and the court of appeals, have both come to the same conclusion, that the attacks carried out under the gaze of President Erdoğan by his security detail against innocent protesters, must proceed for adjudication on the merits,” attorney Andreas Akaras, from the firm Bregman, Berbert, Schwartz & Gilday, LLC, told Law&Crime.

Akaras had been referring to footage appearing to show Erdoğan passively watching from afar as his guards beat up protesters. Turkey’s lawyer did not immediately respond to an email requesting comment.

The melee, which injured 11 people, and its aftermath established what critics detected as a pattern for U.S.-Turkish relations in the Trump era, tacit approval of Erdoğan’s most authoritarian impulses.

In the aftermath, prosecutors brought charges against 15 Turkish security officials, and 11 of those cases were dropped days before former Secretary of State Rex Tillerson’s scheduled meeting in March 2018 with Erdoğan and his foreign minister, Mevlüt Çavüsoğlü, an associate of Paul Manafort.

The lawsuit filed by Akaras’s clients, however, proceeded in the courtroom of U.S. District Judge Colleen Kollar-Kotelly, who rejected Turkey’s invocation of the Foreign Sovereign Immunities Act in 2020.

After Turkey appealed that decision, the D.C. Circuit asked the Biden administration to weigh in the matter, in a fateful test for U.S.-Turkish relations in the post-Trump era.

As Akaras noted, the Biden administration declined to defend Turkey from the lawsuit.

The D.C. Circuit emphasized that the judges have not yet reached any decision on the merits, as the case returns to the trial judge.

In his book “The Room Where It Happened,” former National Security Advisor John Bolton suggests a more personal camaraderie between the two leaders, describing Erdoğan as one of the “dictators [Trump] liked.” Bolton wrote that Trump pulled foreign policy “favors” for Erdoğan by trying to scuttle the criminal prosecution of Turkey’s state-run Halkbank, in a money laundering case allegedly tied to Erdoğan’s family and ruling Justice and Development Party.

Read the D.C. Circuit’s ruling below:

(Screenshot via Voice of America)