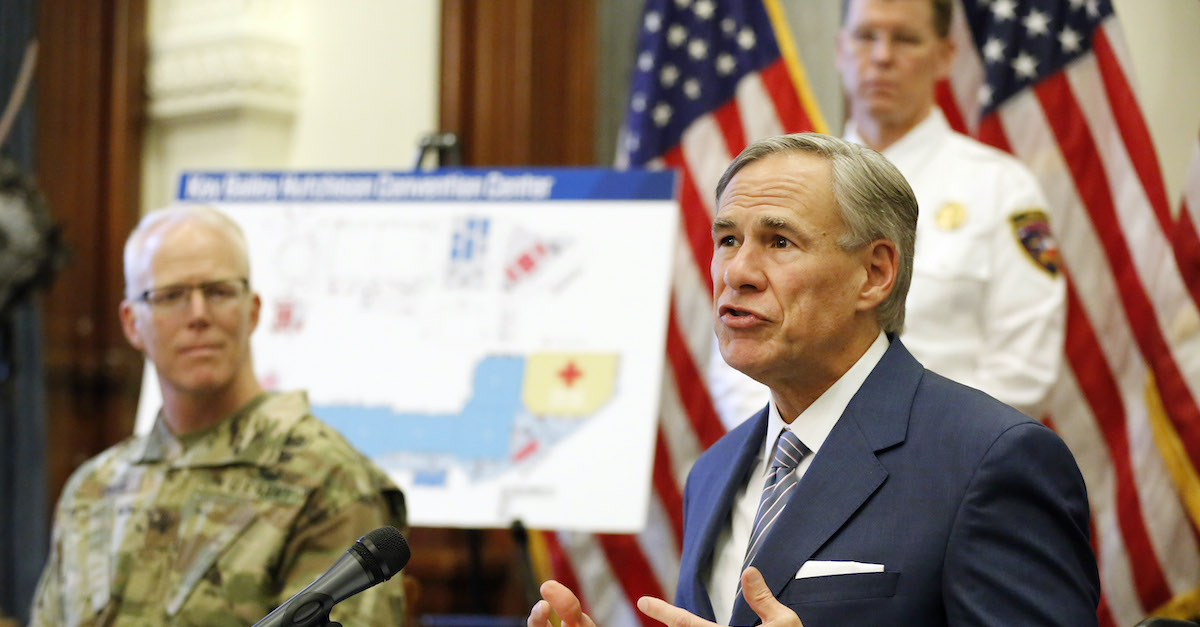 A campaign finance watchdog and voting advocacy group filed a lawsuit on Monday on behalf of the League of United Latin American Citizens (LULAC) and the Texas League of United Latin American Citizens. The Campaign Legal Center (CLC) claimed that Republican Texas Gov. Greg Abbott and Texas Attorney General Ken Paxton, among other state officials, have unlawfully attempted to suppress the minority vote during the coronavirus pandemic.

The filing alleged violations of the Voting Rights Act (VRA), and the First, Fourteenth and Twenty-Sixth Amendments. The plaintiffs said that restrictions on access to voter expansion (such as vote-by-mail) during the pandemic must be blocked. They noted that AG Paxton went so far as to threaten criminal prosecution of “third parties” who “advise voters to apply for a mail-in ballot based solely on fear of contracting Covid-19.”

“This case involves an illegal and unconstitutional attempt to prevent Texans from voting, in particular, minority and younger voters. Defendants have improperly sought to restrict access to absentee ballots in the midst of a pandemic, using an unduly narrow vote-by-mail policy coupled with threats of criminal prosecution, to force voters to choose between jeopardizing their health by voting in person or not voting at all,” the CLC filing began. “This practice unduly burdens the right to vote, and that burden falls disproportionately on minority voters. At the same time, Defendants have made absentee ballots freely available to anyone age 65 or older, thus discriminating against younger voters. Because Defendants’ actions violate the First, Fourteenth, and Twenty-Sixth Amendments of the United States Constitution and Section 2 of the Voting Rights Act, the LULAC Plaintiffs ask the Court to enjoin Defendants’ illegal and unconstitutional activity, and ensure that all Texans are able to safely vote in this year’s upcoming elections.”

The plaintiffs maintain that the state of Texas’ policy ought to be blocked because it puts its citizens at great risk, “particularly the Latino community” which has been disproportionately impacted by COVID-19.

“Against this backdrop, Texas voters will cast their ballots in a primary runoff election on July 14, 2020, and the general presidential election on November 3, 2020. Under Defendants’ unduly restrictive vote-by-mail policy, most will either have to do so in person— thereby risking exposure to COVID-19 through contact with voting equipment, election personnel, other voters, and observers—or not at all,” the lawsuit said. “Defendants’ restrictive vote-by-mail policy violates the Constitution.”

On the same day that this suit was filed, Paxton argued separately in favor of the very restrictions CLC opposed.

A district court in the City of Austin previously ruled in favor of expanded postal voting by interpreting a section of the Texas Election Code which allows residents to cast ballots by mail if they have “a sickness or physical condition that prevents the voter from appearing at the polling place on election day.”

Paxton’s 75-page reply brief filed with the Court of Appeals for the Fourteenth Judicial District in Houston claimed that the Travis County District Court had done a “faulty reading of [the] statute.”

The lawsuit against Paxton that we now discuss asks the U.S. District Court for the Western Division of Texas to declare that Abbott and Paxton are unconstitutionally opposing expansion of voting by mail during the pandemic. The filing also asks that the court bar these restrictions from being used in these year’s elections.

CLC President Trevor Potter said in a statement obtained by Law&Crime that Texas officials are currently giving voters a false choice between their safety and the exercise of their right to vote.

“Expanding voter access during a global pandemic should not be a partisan issue,” said Trevor Potter, president at CLC, and a former Republican Chairman of the Federal Election Commission.” Potter said. “The courts should not allow Texas to force voters to choose between their health and exercising their fundamental right to vote. Texas should redirect its energy and make it easier to vote safely instead of threatening its citizens with prosecution simply for wanting to vote from the security of their own homes.”

Lawsuit against Greg Abbott… by Law&Crime on Scribd