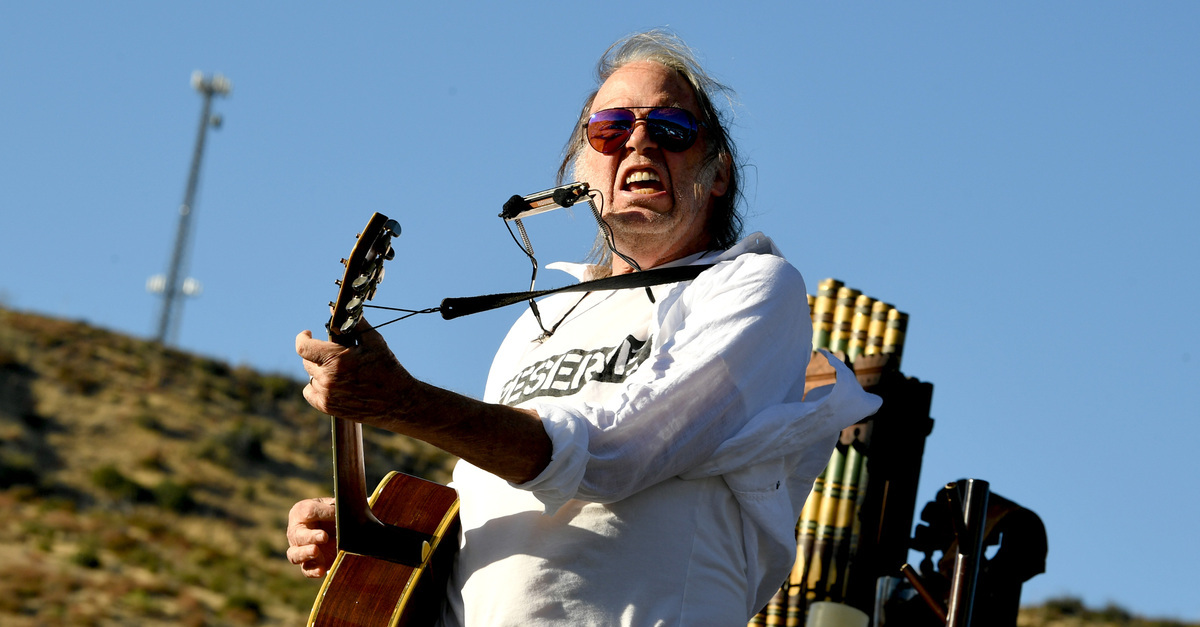 Canadian-American folk rock artist Neil Young filed a copyright infringement lawsuit against President Donald Trump’s reelection campaign in federal court on Tuesday over the unauthorized use of two of his songs at a recent campaign rally in Tulsa, Oklahoma.

“This complaint is not intended to disrespect the rights and opinions of American citizens, who are free to support the candidate of their choosing,” the complaint filed in the U.S. District Court for the Southern District of New York (SDNY) notes. “However, Plaintiff in good conscience cannot allow his music to be used as a ‘theme song’ for a divisive, un-American campaign of ignorance and hate.”

Young’s filing–which is available on his website–alleges copyright infringement based on Trump’s “public performance of” the singer-songwriter’s “copyrighted musical compositions.” Specifically, the lawsuit notes that Trump’s campaign again played Rockin’ in the Free World as well as the song Devil’s Sidewalk “numerous times at rallies and political events for the entertainment and amusement of those attending those rallies and political events.”

The two “compositions were and are publicly performed at public events conducted, controlled, managed, supervised and arranged for by” Trump’s 2020 reelection campaign, the brief complaint notes.

The lawsuit alleges that Trump’s campaign “does not now have, and did not at the time of the Tulsa rally, have a license or [Young’s] permission to play the two songs at any public political event.”

“[Young] has continuously and publicly objected to the use by the [Trump] campaign of the songs,” the lawsuit continues.

The Manitoba-born “Godfather of Grunge” has publicly fumed for years about Trump’s unwelcome use of his music, which is often left-wing and harshly critical of American political culture.

In 2015, Young threatened to sue Trump for his use of Rockin’ in the Free World–an anthemic denunciation of the United States’s well-funded war machine at the expense of public welfare–at the same campaign announcement where then-candidate Trump infamously described Mexicans as “rapists.” The singer-songwriter eventually decided against that litigation due to licensing issues.

As a result of that initial 2015 kerfuffle, the lawsuit claims, Trump’s 2016 campaign “issued a statement stating that it had procured a license to do so, thus acknowledging that it knew a license is required.”

But that original license appears to have lapsed and not been renewed, according to the lawsuit.

Under the ASCAP and BMI licensing regimes, a person, entity or otherwise must file various licensing applications–and pay for them–in order to publicly broadcast compositions and recordings owned by the interested rights-holders. Young’s music here is licensed via ASCAP–which describes their own system in detail here.

Young is seeking statutory damages of up to $150,000 for each infringement–a total that could balloon substantially and quickly depending on the number of times each of the two songs in question have been played. These are known as public performance rights.

The legendary recording artist is also asking the court for a preliminary and permanent injunction that would bar Trump’s 2020 campaign from using any of his compositions or recordings at any public events.