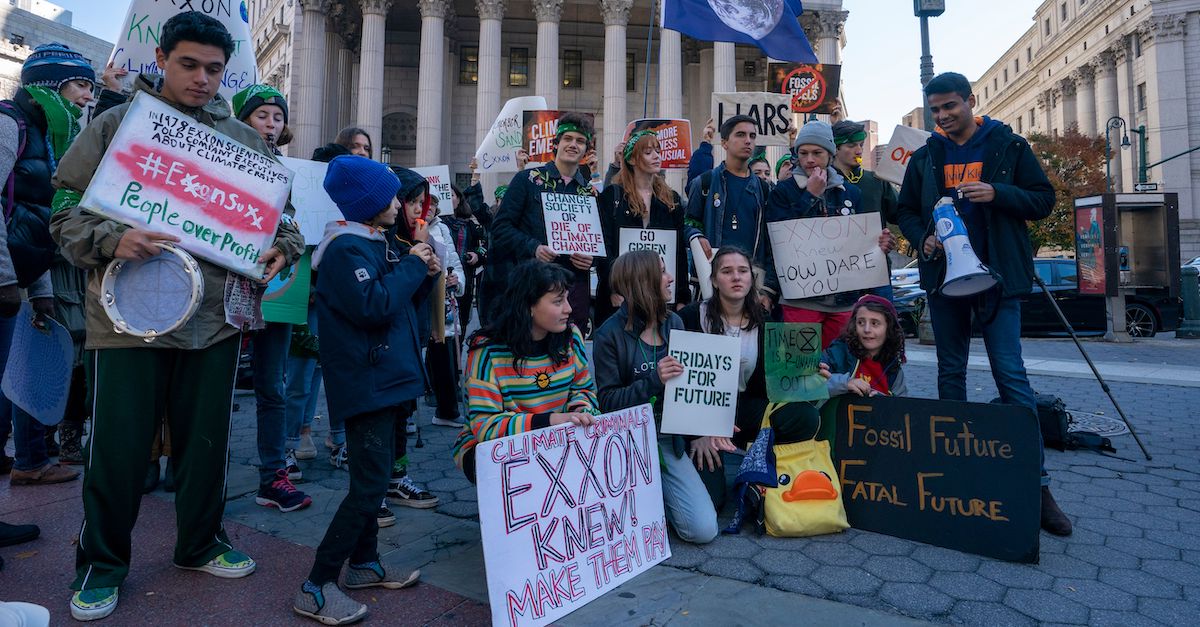 The Connecticut Attorney General, a Democrat, filed a lawsuit against ExxonMobil in state court on Monday, claiming that the company illegally deceived consumers and profited off of lies about “climate science” surrounding fossil fuel combustion. Attorney General William Tong’s lawsuit claims that Exxon’s “campaign of deception” is similar in nature to the “infamous disinformation campaign” used by tobacco companies to “conceal their products’ deadly effects.”

Tong alleged that ExxonMobil violated the Connecticut Unfair Trade Practices Act (CUTPA) by selling not only oil and gas, but also “lies about climate science.”

“ExxonMobil knew that continuing to burn fossil fuels would have a significant impact on the environment, public health and our economy. Yet it chose to deceive the public. No more,” Tong said in a statement obtained by Law&Crime. “ExxonMobil made billions of dollars during its decades-long campaign of deception that continues today. Connecticut’s citizens should not have to bear the expense of fortifying our infrastructure to adapt to the very real consequences of climate change. Our case is simple and strong, and we will hold ExxonMobil accountable.”

The core allegations of the lawsuit are that Exxon misled consumers by willfully “downplaying” the effects of fossil fuel combustion while being aware of the damaging effects this could have a “devastating” effect on the climate in the long term. The lawsuit alleged eight counts under CUTPA, which the AG’s office said do not have a statute of limitations.

The aforementioned deceptive disinformation campaigns—dubbed “greenwashing campaigns”—allegedly involved “false and/or misleading statements” about Exxon’s impact on the environment; failure to disclose negative impact of fossil fuels; creating a false impression about the company’s efforts in moving toward “sustainable energy solutions”; emphasizing uncertainty about climate science on fossil fuels despite “scientific consensus, including from ExxonMobil’s own scientists, that the combustion of fossil fuels was contributing to climate change and that the effects could be devastating.” 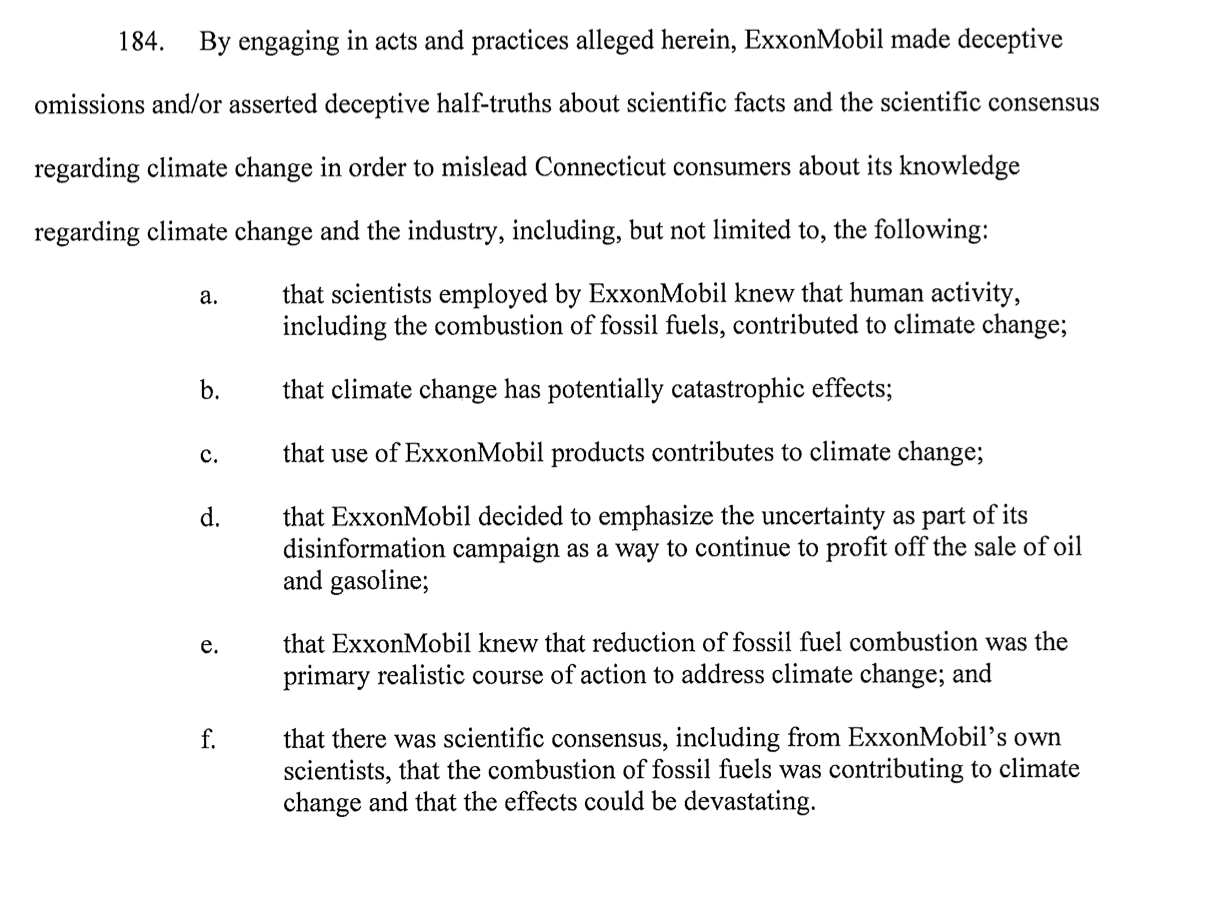 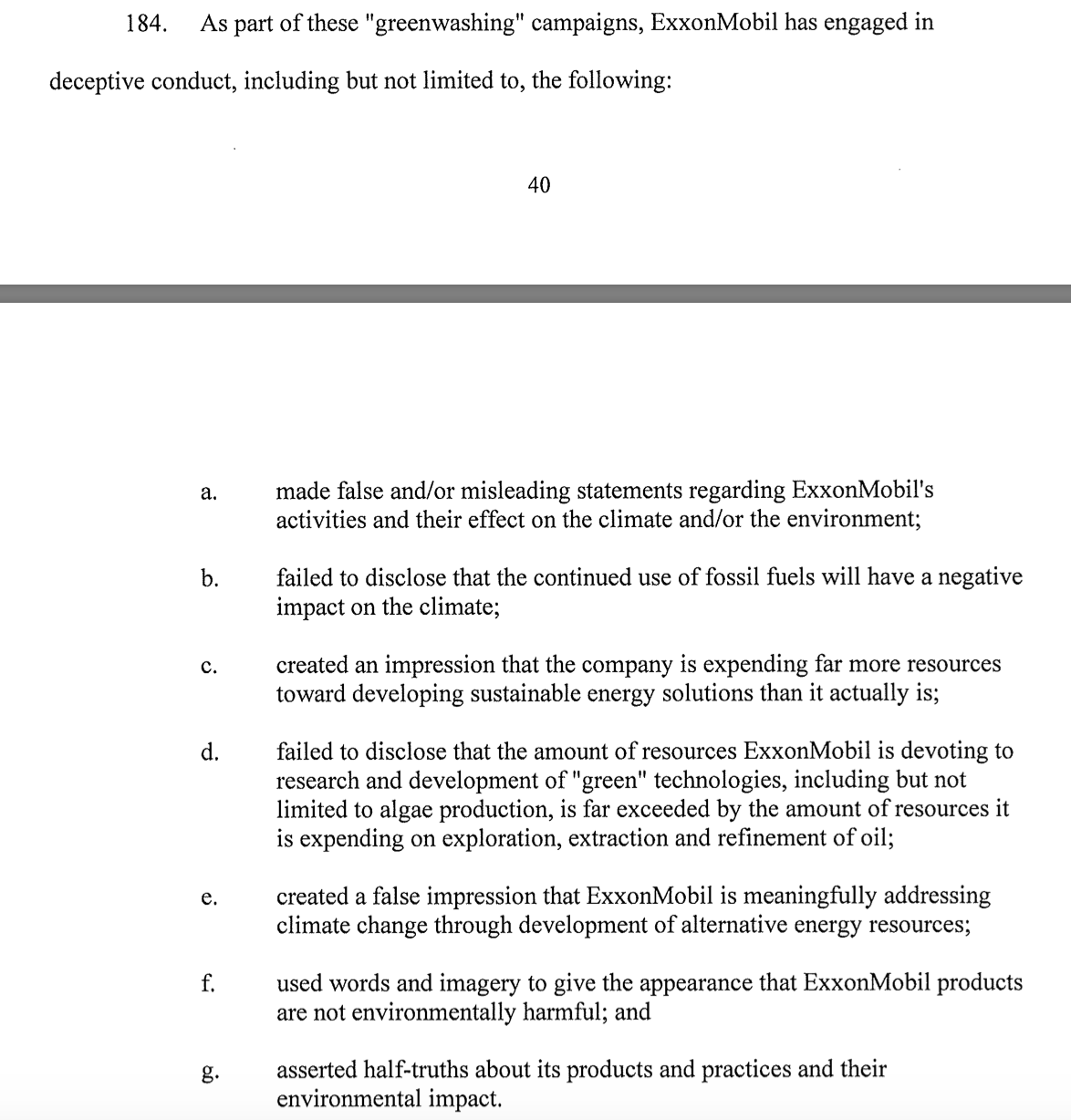 The lawsuit purports to have a smoking gun of sorts in the form of “Exxon’s and Mobil’s own historical internal memos” from the ’70s and ’80s.

“The rationale for Exxon involvement and commitments of funds and personnel is based on our need to assess the possible impact of the greenhouse effect on Exxon’s business. Exxon must develop a credible scientific team that can critically evaluate the information generated on the subject and be able to carry bad news, if any, to the corporation. This team must be recognized for its excellence in the scientific community, the government, internally by Exxon management,” a memo from December 7, 1978 reads. “We see no better method to acquire the necessary reputation than by attacking on of the major uncertainties in the global CO2 balance, i.e., f1ux to the oceans and providing the necessary data.”

“In addition, the international significance of the proposed programs will enhance the Exxon image in the public domain and provide greater public relations value,” the memo went on.

AG Tong’s office claimed this memo and others showed that Exxon has long been aware of—and concerned internally about—potential climate problems associated with the consumption of its products, but chose instead to emphasize uncertainty about scientific conclusions in deceptive advertising. The AG alleged that such unfair practices harmed Connecticut residents in myriad ways.

“Because of this deception, Connecticut lost out on decades of opportunities to prepare for and mitigate climate change, which is now causing sea level rise, flooding, drought, increased temperatures, decreased air quality, and more frequent severe storms—all with devastating consequences for public health, the environment, and our economy. Even if the Earth stays at its current rate of warming, the State of Connecticut and its citizens will have to expend billions of dollars to adapt to the consequences of global warming,” a press release on the matter said. “The lawsuit seeks relief in the form of remediation for past, present and future harm from climate change, restitution for investments already made due to climate change, disgorgement of corporate profits, civil penalties, disclosure of all climate research, establishment of a third-party controlled education fund and an immediate end to the false and misleading information that ExxonMobil has been disseminating for years.”

Law&Crime reached out to ExxonMobil for comment on the lawsuit.

“Legal proceedings like this waste millions of dollars of taxpayer money and do nothing to advance meaningful actions that reduce the risks of climate change,” Norton said. “ExxonMobil will continue to invest in efforts to reduce greenhouse gas emissions while meeting society’s growing demand for energy.”

“The claims are baseless and without merit. We look forward to defending the company in court,” Norton added.