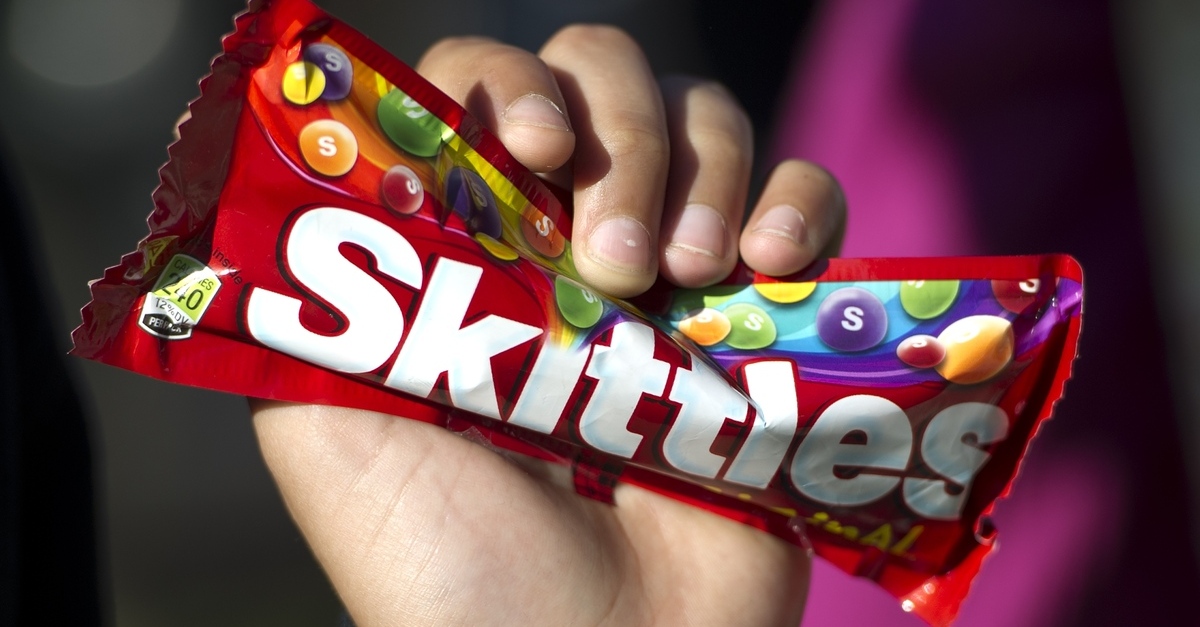 Package of Skittles candy shown above.

San Leandro resident Jenile Thames filed a complaint in U.S. District Court for the Northern District of California alleging that Skittles are unsafe for consumers because they contain “heightened levels” of titanium dioxide (TiO2), a “known toxin.” Thames argues that Mars “has long known of the health problems posed by TiO2,” and that in 2016, Mars “publicly committed to phasing out” the substance, but has failed to make good on that promise.

The lawsuit accuses Mars both of using a dangerous additive and also of “bl[owing] smoke,” by falsely claiming to start using natural ingredients in an effort to satisfy consumers.

In the complaint, Thames called attention to Skittles’ longstanding tagline, “Taste the rainbow!” The complaint asserts, “The color of Defendant’s rainbow, however, is due to its use of TiO2,” — a use that, according to Thames, was not even necessary for the creation of colorful candy. Thames points out that many other colorful candies do not use TiO2 in their manufacture, according to the complaint:

For example, Swedish Fish Soft & Chewy Candy does not rely on TiO2 and yet achieves a bright red color. Likewise, Black Forest Gummy Bears does not rely on TiO2 and still strikes an assortment of colors, including orange, red, yellow, and green. Similarly, Sour Patch Kids does not make use of TiO2 and accomplishes vivid colors like lime green, yellow, orange, and redberry.
Nerds also achieves bright colors including blue, green, red, and orange without the use of TiO2.

Thames argues not only that Mars is using a harmful additive in Skittles — but also that Mars publicly acknowledged years ago that TiO2 was unsafe and pledged to stop using it (just as other manufacturers, such as Dunkin’ Donuts, had done at the time). Thames refers in the complaint to a February 2016 announcement in which Mars “alerted the public of its intention to remove TiO2 from its confectionary products,” along with a public response by Jaydee Hanson, Senior Policy Analyst at Center for Food Safety, who said at the time that the Center was “pleased to see that MARS has taken a positive step toward eliminating toxic, unnecessary nanomaterials from its line of food products.”

Thames’ complaint also contains specific allegations for just how harmful TiO2 could be in food:

The reason for eliminating titanium dioxide is simple: TiO2—which is used in paints, coatings, adhesives, plastics, printing inks, and roofing materials—has demonstrated an ability to pass through biological membranes, circulate through the body, and enter cells. Research shows that the effects are serious, including DNA and chromosomal damage, organ damage, inflammation, brain damage, genital malformations, lesions in the liver and kidneys, and cell neurosis.

Uses and restrictions. The color additive titanium dioxide may be safely used for coloring foods generally, subject to the following restrictions:

(1) The quantity of titanium dioxide does not exceed 1 percent by weight of the food.

(2) It may not be used to color foods for which standards of identity have been promulgated under section 401 of the act unless added color is authorized by such standards.

(d) Labeling. The label of the color additive and any mixtures intended solely or in part for coloring purposes prepared therefrom shall conform to the requirements of § 70.25 of this chapter.

(e) Exemption from certification. Certification of this color additive is not necessary for the protection of the public health and therefore batches thereof are exempt from the certification requirements of section 721(c) of the act.

In the complaint, Thames brings claims against Mars for unfair and fraudulent business practices under California law, as well as separate claims for breach of warranty, false advertising, fraud, and unjust enrichment. Thames asks not only that the federal court certify the case as a class action, but also that it award both compensatory and punitive damages to all plaintiffs.

The European Food Safety Authority announced in May 2021 that titanium dioxide “can no longer be considered safe as a food additive.”

“While we do not comment on pending litigation, our use of titanium dioxide complies with FDA regulations,” a Mars, Inc. spokesperson said in a statement to Law&Crime.

Attorneys for Thames did not immediately respond to request for comment.