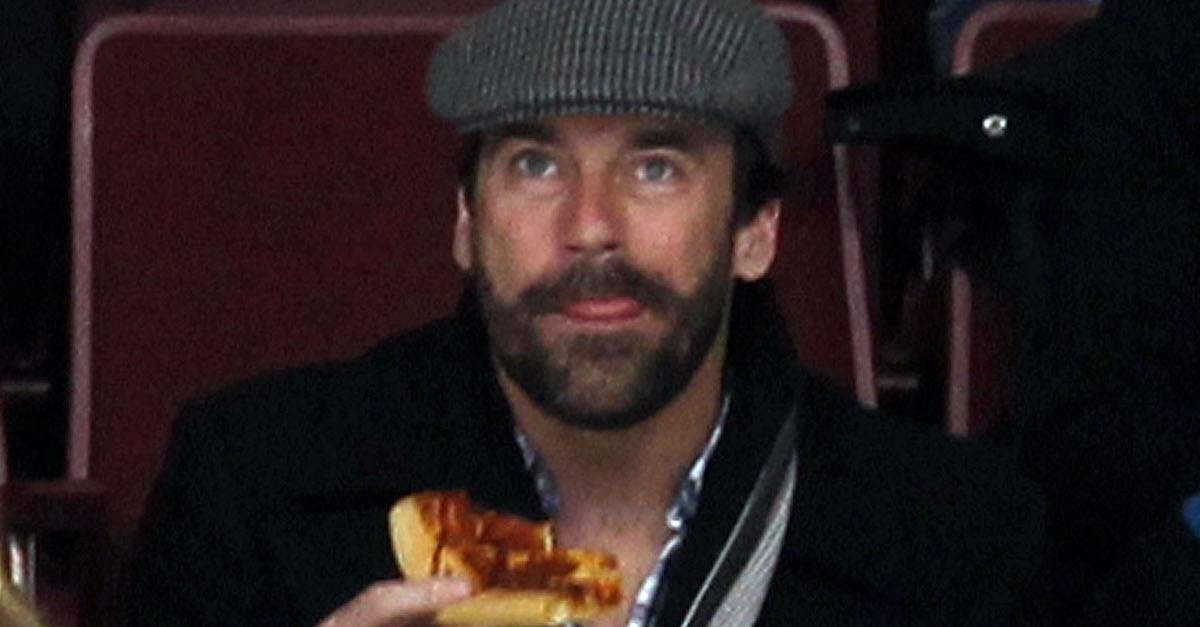 A rather famous photo of Mad Men star Jon Hamm’s “Dick Whitman” taking him out for a walk was the subject of a lawsuit that has now been dismissed. Lawrence Schwartzwald, the photographer, sued Oath, Inc.—the owner and operator of HuffPost—for unauthorized use of the image, but the judge ruled that the image was protected by the “fair use doctrine.”

U.S. District Judge Ronnie Abrams, the sister of Law&Crime founder Dan Abrams, presided over the lawsuit. Judge Abrams spent more than 20 pages recounting the relevant facts and law of a case about a photo that the plaintiff described as “what Jon Hamm looks like wearing trousers in public while he walks down the street, ostensibly without any underwear.”

The photo edit in question, as displayed in the filing: 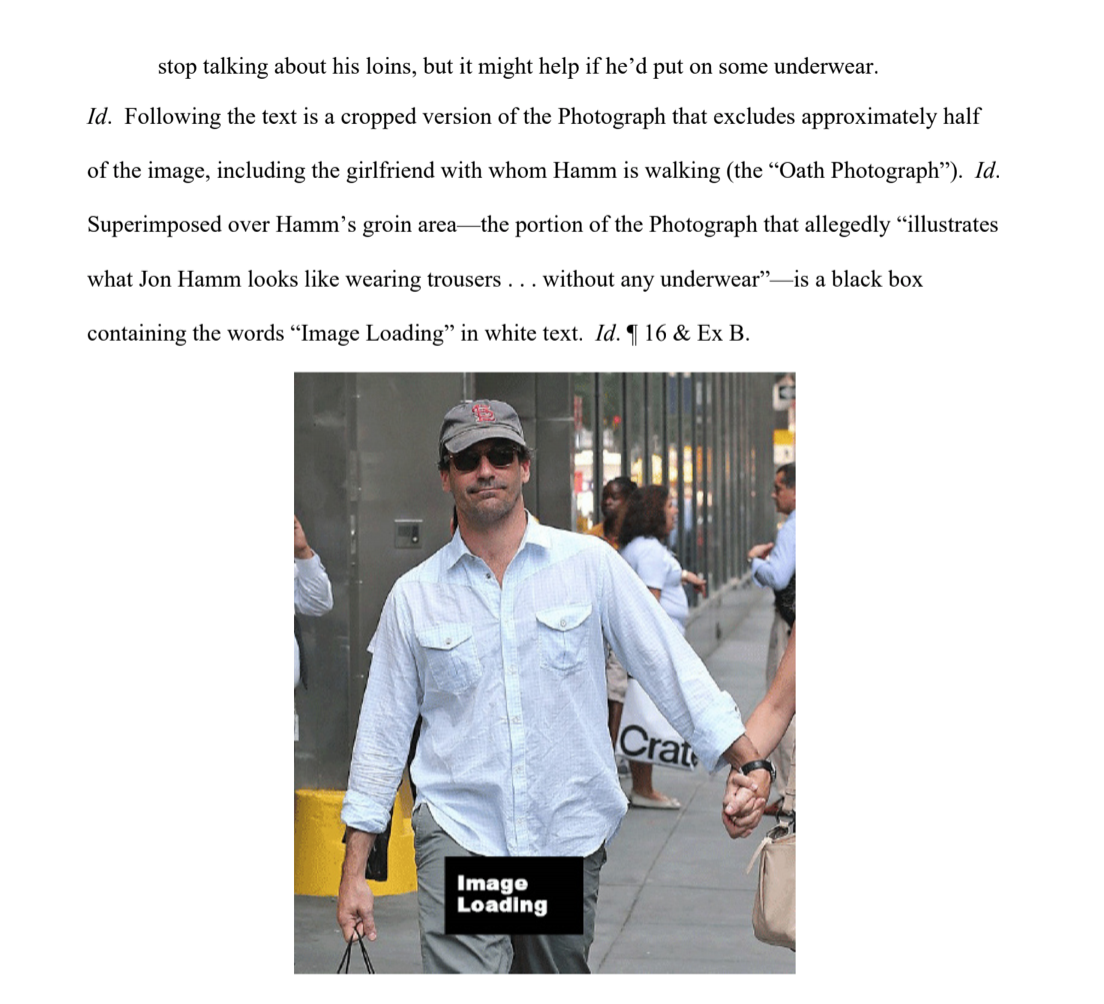 And the original, which many doubtlessly zoomed in on and ogled after it was documented. 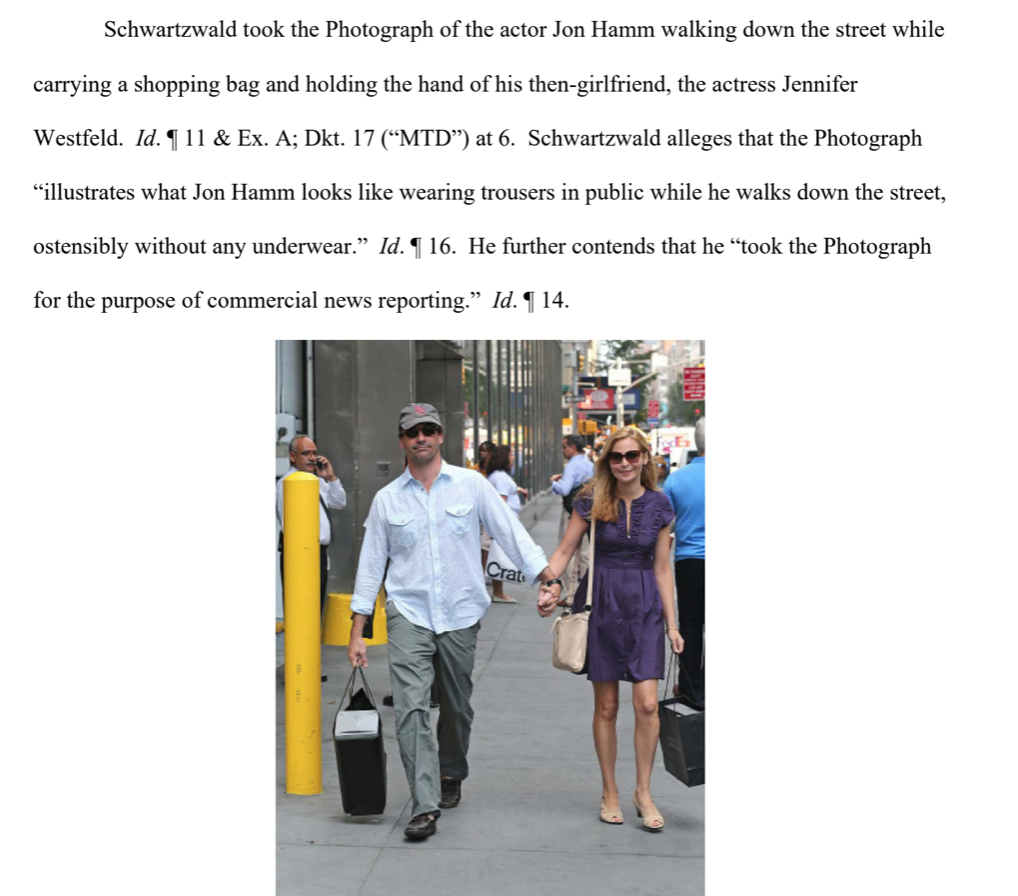 Schwartzwald said he licensed the picture, which was taken in 2012, to Splash News & Picture Agency, the New York Daily News and “other third-party media outlets ‘for the purpose of commercial news reporting.'” The plaintiff said he discovered HuffPost’s allegedly offending listicle in 2018. The story was headlined “25 Things You Wish You Hadn’t Learned in 2013 and Must Forget in 2014.”

While some might argue this was in a sense an example of “hard-hitting journalism,” Schwartzwald took issue.

“Oath did not license the Photograph from Schwartzwald, nor did it obtain his permission or consent to publish the Photograph,” the filing noted. “Schwartzwald registered the Photograph with the United States Copyright Office on May 18, 2017—more than three years after Oath published the article.”

The judge, after the tedious exercise of weighing together “all of the statutory factors” as required by the Supreme Court, found that the scales of justice ultimately tipped in HuffPost’s favor; the use of the image was “fair”:

“The Supreme Court has instructed that, to ascertain whether there is fair use, all four of the statutory factors must be weighed together.” Capitol Records, 910 F.3d at 663 (citing Campbell, 510 U.S. at 577-78). As described above, Oath’s use of the Photograph was transformative, there is no plausible allegation of bad faith, the nature of the Photograph was more factual than creative, the Photograph was already published, the amount and substantiality of the original Photograph that Oath used was reasonable in relation to the purpose of the copying, and it is implausible that Oath’s version of the Photograph will supplant the commercial market for the original. The only sub-factor that weighs against a finding of fair use is the fact that Oath used the Photograph for commercial purposes. Yet as described above, this factor “must be applied with caution,” Cariou, 714 F.3d at 708 (citation omitted), and is of “less significance” in light of the transformative nature of Oath’s use, Yang, 405 F. Supp. 3d at 542-43 (citation omitted). Weighing the statutory factors together, the Court concludes that Oath’s use was fair as a matter of law.

Yes, that’s a lot of legal jargon. One way of better understanding the balancing of the factors at play was the judge’s conclusion that the edit of the photo was “transformative.”

“Transformative works ‘lie at the heart of the fair use doctrine’s guarantee of breathing space within the confines of copyright, and the more transformative the new work, the less will be the significance of other factors, like commercialism, that may weigh against a finding of fair use,” the opinion and order explained.

In reality, HuffPost’s obscuring of the form of Jon Hamm’s penis transformed the work’s original purpose, which was to display the actor’s bulge for the world to see.

Oath contends that its use of the Photograph was transformative because the superimposed text box, photo caption, title, and broader context of the article fundamentally transformed the character and purpose of the use. See MTD at 10-14. The Court agrees. Unlike the original Photograph, which Plaintiff claims had the objective purpose of “illustrat[ing] what Jon Hamm looks like wearing trousers in public while he walks down the street, ostensibly without any underwear,” Oath’s use of the Photograph served the dual purpose of mocking both Hamm and those who found the Photograph newsworthy in the first instance.

By superimposing a text box over Hamm’s groin area, Oath obscured the specific part of the Photograph that allegedly reveals this fact. A reader of Oath’s article would thus not be able to see the very thing the Photograph purportedly illustrates beneath the strategically-placed text box—and what sets the Photograph apart from most other photographs of Hamm. Accordingly, unlike Schwartzwald’s photograph, Oath’s photograph is not “illustrat[ive]’ of “what Jon Hamm looks like wearing trousers in public while he walks down the street, ostensibly without any underwear.” Id. Rather, it seeks to conjure up this image in the reader’s mind through the comedic placement of the text box.

Schwartzwald’s lawsuit was dismissed with prejudice, meaning it cannot be filed again.