Rep. Devin Nunes’s (R-Calif.) lawsuit spree continued on Monday with a complaint against The Washington Post demanding more than $250,000,000 in damages.

The congressman’s defamation attorney of choice, Steven Biss, filed suit in the U.S. District Court for the Eastern District of Virginia, Richmond Division. Nunes said just over a week ago that this would happen.

Nunes said that he didn’t know “what planet the Washington Post is on,” but that the publication would have “an opportunity in federal court in the next couple weeks to explain who their sources are, because I’m going to have to take them to court because I didn’t go to the White House. I didn’t talk to President Trump, Harris. So, this is the same garbage.”

What sources? The ones cited by WaPo’s Shane Harris and the other bylines in “the WaPo Hit Piece” headlined, “Senior intelligence official told lawmakers that Russia wants to see Trump reelected.” Shane Harris was the only reporter named as a defendant in the lawsuit. The complaint said Harris was “well-known as a puppet of the FBI and CIA, employed to selectively leak talking points and classified information and to smear targets.”

The lawsuit featured a truth vs. lies chart, similar in style to the one that was used in a lawsuit against CNN. 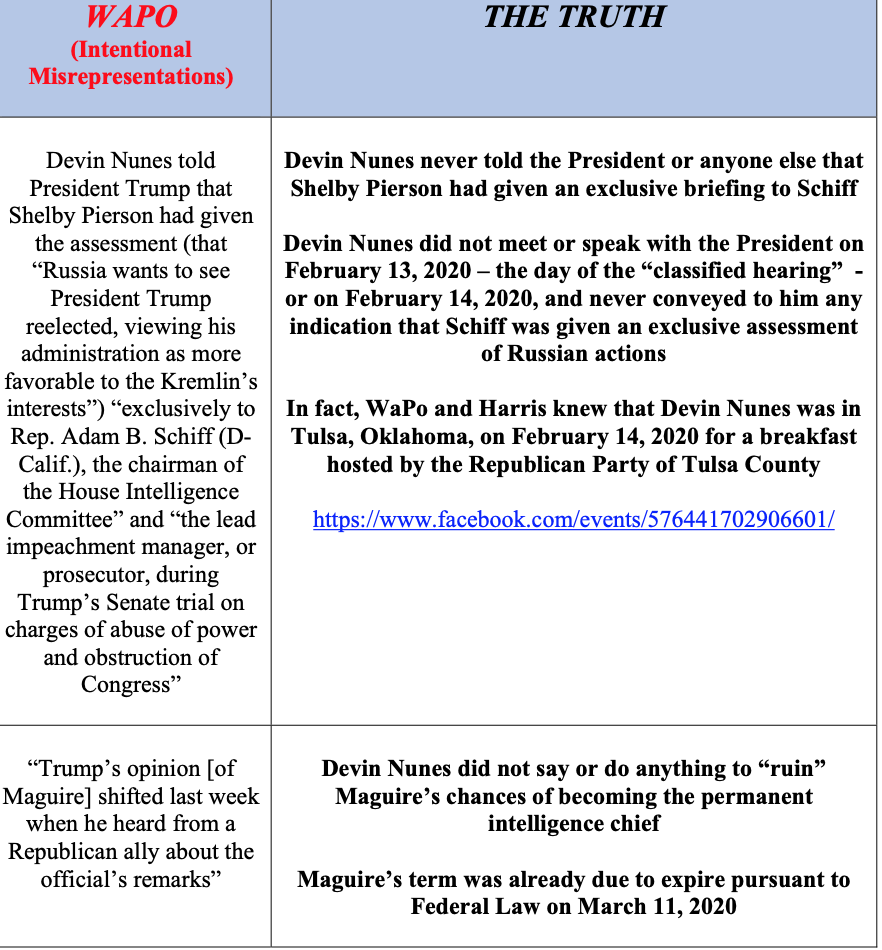 According to the 23-page complaint, Jeff Bezos has been using his newspaper’s “mighty pen” since 2013 to influence elections. The Post failed to defeat the Republican Party in 2016 despite publishing “notoriously libelous” content and continues to libel President Donald Trump and Nunes, which must be ended, the lawsuit claims:

Billionaire, Jeff Bezos (“Bezos”), purchased WaPo in 2013 for the purpose of using WaPo’s mighty pen to influence Federal elections. Bezos failed to defeat the GOP in 2016, in spite of WaPo’s notoriously libelous reporting. Bezos’ WaPo heavily promoted the Russian “collusion” hoax between 2017 and 2019, in spite of the fact that there was no evidence that any member of the Trump campaign colluded with any “Russian” to influence the 2016 Presidential Election. This is 2020. As this case illustrates, Bezos and his printing press remain desperate to defame the President of the United States and his allies in Congress. This defamation must end.

Nunes accused Harris and The Washington Post of defamation and common law conspiracy. Nunes is seeking a jury trial.