The “click-bait” Ryan Lizza wrote and Esquire (Hearst Magazines, Inc.) published about Rep. Devin Nunes (R-Calif.) was so hurtful that Nunes is entitled to $75,000,000 in damages, claimed Nunes in a lawsuit filed on Monday. The lawsuit was filed a year to the day that Lizza’s story, “Devin Nunes’s Family Farm Is Hiding a Politically Explosive Secret,” was published online.

In that story, Lizza identified the California Republican’s “secret” as follows: “The Nunes family dairy of political lore—the one where his brother and parents work—isn’t in California.”

It seems Nunes wasn’t a fan of the story, and isn’t a fan of Lizza’s. Lizza now works as Chief Washington Correspondent at Politico.

According to Nunes, Lizza is a “high-profile, left-wing political journalist, well-known for his extreme bias towards Plaintiff,” and who was a “fixture of the main stream media until December 2017, when his then-employer – The New Yorker magazine – summarily severed all ties and publicly terminated Lizza because of ‘improper sexual conduct.'”

It’s true that Lizza was accused of “improper sexual conduct” and was fired by The New Yorker, then hired by Esquire. Lizza called the firing a “terrible mistake,” saying he was “dismayed that The New Yorker has decided to characterize a respectful relationship with a woman I dated as somehow inappropriate.” A lawyer for Lizza’s accuser disputed the “respectful relationship” characterization.

“Although she desires to remain confidential and requests that her privacy be respected, in no way did Mr. Lizza’s misconduct constitute a ‘respectful relationship’ as he has now tried to characterize it,” Douglas Wigdor said at the time. “Our client reported Mr. Lizza’s actions to ensure that he would be held accountable and in the hope that by coming forward she would help other potential victims.”

Lizza is also a senior political analyst at CNN. After the allegations, he stopped making appearances on CNN, pending an investigation. CNN said that, “Based on the information provided and the findings of the investigation,” the network ultimately found “no reason to continue to keep Mr. Lizza off the air.” Lizza joined Politico in April 2019 and continues to appear on CNN.

At any rate, Devin Nunes noted that Lizza was named in “Shitty Media Men” — a document, you may remember, that “collected rumors and allegations of sexual misconduct, much of it violent, by men in magazines and publishing.” According to Nunes’s lawsuit, during Lizza’s brief stint at Esquire, he visited Sibley, Iowa and “lurked around [Nunes’s] grammar-school aged nieces and stalked members of Plaintiff’s family, reducing Plaintiff’s sister-in-law to tears.”

Nunes claimed that the ensuing “scandalous hit piece” Lizza penned and Esquire published “intentionally disparaged Plaintiff and his family, accused Plaintiff of dishonesty, deceit, conspiracy, and unethical practices, and severely impugned his integrity and skills as a United States Congressman.”

Nunes went on to explain at length why, in his view, this lawsuit was necessary: To punish hurtful click-bait and to deter journalists from engaging in such practices henceforth.

The false and defamatory statements were foreseeably republished millions of times, including in thousands of print and digital magazines distributed and sold in Iowa, read by Iowans in Iowa.

In this case, Plaintiff seeks money damages for the insult, pain, embarrassment, humiliation, mental suffering, anguish, and injury to his good name and professional reputation in Iowa and elsewhere, caused by the Defendants’ defamation. The Defendants published click-bait, sensationalist, egregious misstatements simply to sell magazines and, in Lizza’s case, to distract readers from his negative image and history as a sexual predator and to improve his standing. The Defendants’ had an axe to grind against Plaintiff, and wrote the hit piece in order to accomplish a nefarious purpose. Defendants’ misconduct exemplifies the very worst of modern “journalism”. They should be punished for their unlawful actions and a very strong message needs to be sent to prevent other so-called “journalists” from acting in a similar way.

Notice that Nunes accused Lizza of writing this piece to “distract readers” from his “history as a sexual predator.” Nunes, after vehemently denying the “false claim” that he “‘conspired with his own family, Congressman [Steve] King, and an Iowa dairy publication to ‘hide’ his family’s ‘secret’ move to Iowa,” accused Lizza of acting like a “sex offender or pedophile cruising the local neighborhood for victims” during his Iowa visit. 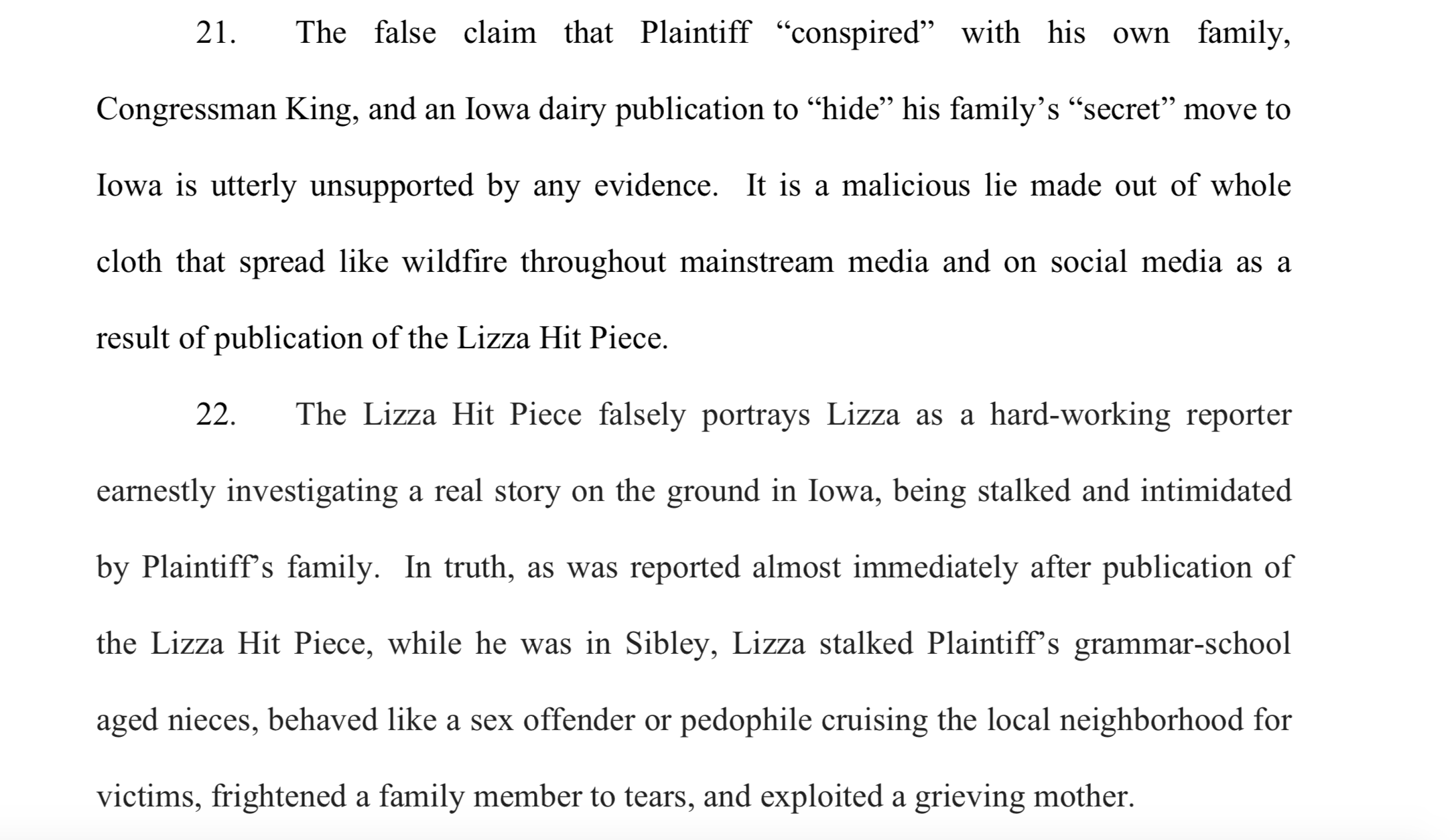 The lawsuit, which you can read in full below, seeks “(a) compensatory damages and punitive damages in the sum of
$75,000,000.00, (b) prejudgment interest on the principal sum awarded by the Jury from the date of the commencement of this action until the date of Judgment, and (c) costs incurred – arising out of the Defendants’ defamation and common law conspiracy.”

Nunes said the Lizza story was defamatory and aided in going viral by the above-referenced conspiracy. 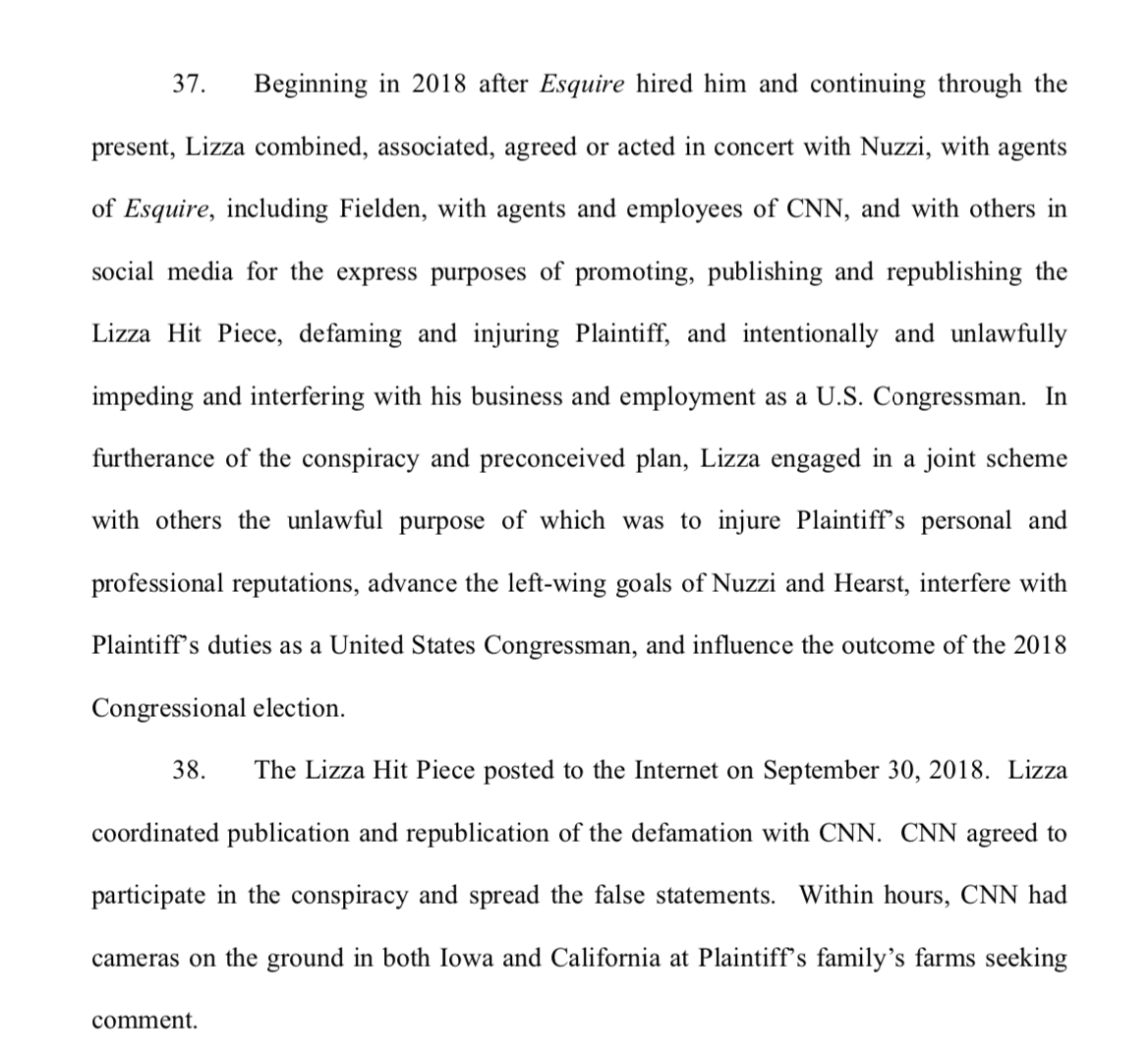 Nunes claims all of this caused both “presumed damages and actual damages, including, but not limited to, insult, pain and suffering, emotional distress and trauma, insult, anguish, stress and anxiety, public ridicule, humiliation, embarrassment, indignity, damage and injury to his personal and professional reputations, loss of enjoyment of life, diminished future earning capacity, out-of-pocket expenses and costs, in the sum of $75,000,000.00 or such greater amount as is determined by the Jury.”

Nunes previously sued over an alleged “fake farmer” conspiracy; he also filed a $250,000,000 lawsuit against Twitter, Liz Mair, Mair Strategies, LLC, and the Twitter accounts @DevinNunesMom and @DevinCow (Devin Nunes’ Cow) for their “negligence, defamation per se, insulting words, and civil conspiracy.” The latter lawsuit has resulted in some interesting courtroom happenings.