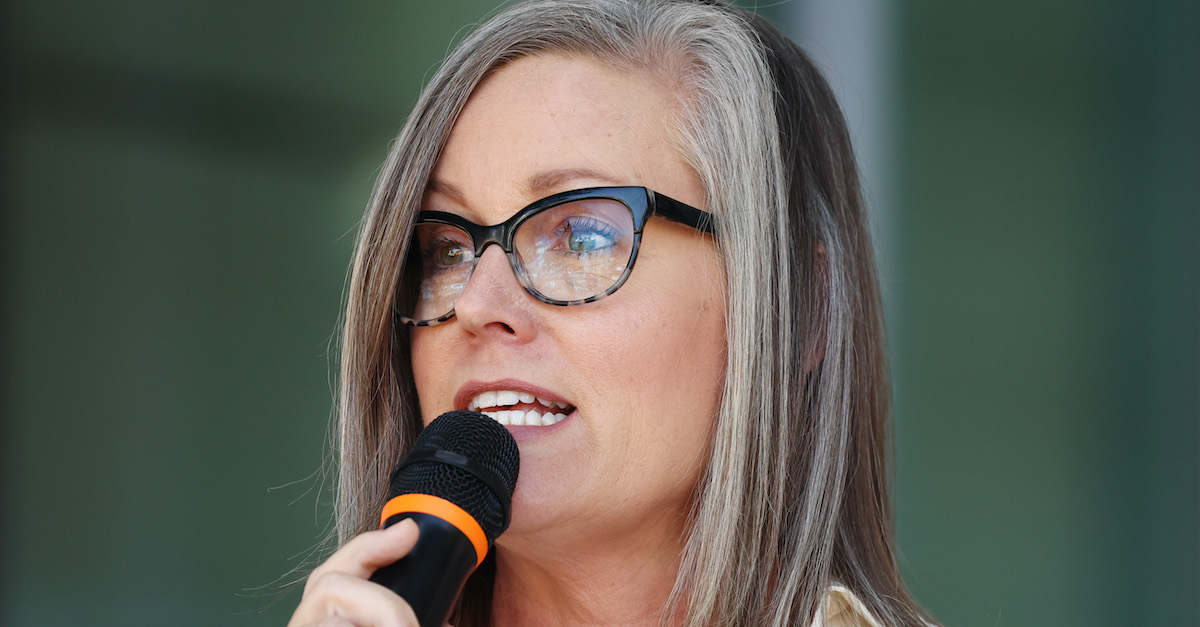 Arizona Secretary of State and Democratic gubernatorial candidate Katie Hobbs speaks at a press conference calling for abortion rights outside the Evo A. DeConcini U.S. Courthouse on Oct. 7, 2022 in Tucson, Arizona. (Photo by Mario Tama/Getty Images)

Arizona Secretary of State Katie Hobbs (D) indicated that she will sue officials in one county if they choose to count ballots by hand, a process that’s “time intensive and prone to human error.”

“Any election director in Arizona—the official responsible for overseeing tabulation of ballots—can attest that it’s impossible to complete an accurate hand count of an election with dozens of races on the ballot in time to comply with applicable statutory deadlines, including the county canvass deadline,” her elections director Kori Lorick wrote in a three-page letter to the Cochise County Board of Supervisors.

The legal threat, first reported by the local outlet Vote Beat Arizona, highlights a key issue in the current secretary of state’s race for governor against Kari Lake, a hard-right candidate who embraced former President Donald Trump’s conspiracy theories about the 2020 presidential election. Like Trump, Lake has refused to confirm that she will accept the results of the midterm elections if she loses.

Polls show that the Arizona gubernatorial race will be a tight one, with RealClearPolitics showing Lake with a composite 1.6-point lead — but with Hobbs nipping at her heels within the margin of error.

A key issue dividing the two candidates has been voting rights and election security. Hobbs has served as secretary of state throughout litigation by Trump and his allies trying to overturn President Joe Biden’s victory in that state. She has faced down repeated death threats in her defense of the election results.

In addition to concerns about the accuracy and practicability of hand-counting, the secretary’s office notes that the last-minute change would have logistical concerns.

“Additionally, transitioning to a full hand count this close to the election raises operational and security concerns. Election procedures are generally developed through careful consideration and with sufficient time to prepare for an upcoming election. In fact, Cochise County has already filed its election program and emergency contingency plan for the General Election with the Secretary of State, confirming its usage of electronic equipment for this election,” the letter states. “Early voting for the 2022 General Election began over a week ago, and counties are already permitted by law to begin processing and tabulating ballots. Drastically changing procedures now—mere weeks before Election Day—creates significant risk of administrative error and has the potential to cause voter confusion and mistrust in our elections.”

According to Vote Beat’s report, two board’s two Republicans — Supervisors Peggy Judd and Tom Crosby — are in favor of a hand count of all ballots cast by Cochise County’s 87,000 registered voters, and they intend to meet to discuss a possible vote on Monday at 2 p.m. Mountain Standard Time.

“If the Board votes to proceed with a full hand count—putting at risk the accuracy and integrity of our elections—the Secretary will take all available legal action to ensure that Cochise County conducts the 2022 General Election in compliance with Arizona law,” the letter states. “If that occurs, we note that Arizona law provides for mandatory fee shifting under these circumstances. […] We are all stewards of taxpayer dollars, and taxpayers should not bear the burden of the Board’s contemplated unlawful action.”

Judd denied that the vote was politically motivated.

“This is the people’s government and I am not happy that many people have lost confidence in the voter process. Going way back to 2016 and that stolen election,” she told Law&Crime in an email.

Asked for clarification about that remark about the 2016 race, Judd replied that she was referring to skepticism by some Democrats about Trump’s election.

In a separate email, Crosby made a reference to Dinesh D’Souza’s 2,000 Mules, a film whose discredited conspiracy theories about the 2020 presidential election sparked uproarious laughter from Trump’s ex-attorney general Bill Barr during his Jan. 6th Committee deposition. The Washington Post noted that a frames from the movie purporting to show a map of Atlanta, Georgia, in fact, depicted Moscow.