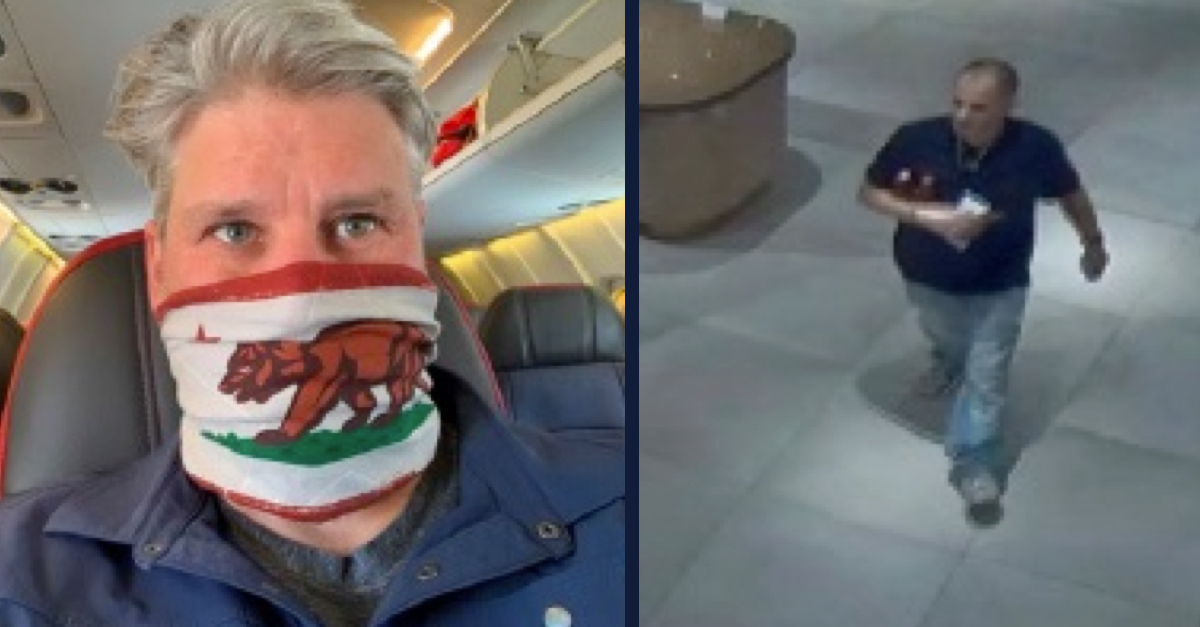 Left: a selfie taken by Michael Lowe on the airplane; right: surveillance image of the man suspected in a burglary, for which Lowe was later detained (images via court filing/attorney Scott Palmer).

An Arizona man who says he has suffered “incomprehensible trauma” after being held in a New Mexico jail due to what he describes as a case of mistaken identity has sued American Airlines.

Michael Lowe says negligence on the part of American Airlines landed him in jail for more than two weeks in 2021, and although the criminal charges against him have been dropped, the time he spent in that jail has left him traumatized and a shell of his former self.

“It is the incomprehensible trauma of the wrongful accusation against Mr. Lowe, his resulting seventeen (17) day incarceration in the Quay County Detention Center (Quay County) in Tucumcari, New Mexico and the continuing crises that are its consequence, which are the subject of this suit,” he says in a lawsuit against American Airlines, filed Monday.

Lowe’s ordeal began with a burglary at a duty-free store Dallas-Fort Worth International Airport (DFW) on May 12, 2020—a burglary that he did not commit.

Lowe was at the airport that day on a layover for his flight from Flagstaff, Arizona, to Reno, Nevada, and DFW police traced the burglary suspect to that same American Airlines flight. According to the lawsuit, police looking for the burglary suspect obtained a search warrant ordering American Airlines to produce whatever travel data it had for passengers on the flight.

In response, the lawsuit alleges, the airline provided information about one person only: Lowe.

Felony and misdemeanor arrest warrants were issued for Lowe in Tarrant County, Texas, at that time, but it appears that nothing happened until more than a year later.

On July 4, 2021, Lowe was in Tucumcari, New Mexico, visiting friends and attending a Fourth of July event. Some sort of “disturbance” occurred at that event, the complaint says, and when police came to investigate, Lowe provided his identification.

“When the officers ran Mr. Lowe’s name and found the outstanding warrants from Tarrant County, they had no choice but to arrest him,” the complaint says.

Lowe, without knowing why he was arrested, was taken to the detention center in Quay County, New Mexico, where he was strip-searched for potential contraband—the first step in what Lowe described as a nightmarish few weeks.

“The terror Mr. Lowe experienced while imprisoned in Quay County for the next 17 days was existential,” the complaint says. “Placed in a [COVID-19] quarantine pod, the facilities contempt for the health, safety and well-being of its inmates was immediately obvious, as not a single staff member nor inmate wore a face covering.”

Lowe said that he lived “in a constant of fear of confrontation or abuse” as “violent outbursts” occurred around him.

“Mr. Lowe was forced to watch when a young inmate was punched in the face three times in rapid succession by an older inmate for no apparent reason,” the complaint says. “A week later, a wall remained stained with the young inmate’s blood.”

Lowe also says that due to overcrowding at the jail, he had no choice but to sleep on the concrete floor, and that “the smell of urine and feces kept the air so pungent that Mr. Lowe was often forced to breath through his mouth and use [h]is jail clothing to cover his nose.”

After 17 days, Lowe was released from the jail, without any apparent explanation or additional information, according to the suit. Wearing the clothes he was wearing when he was arrested—which were now covered in mildew, having been kept wet inside a plastic bag for more than two weeks—he bought a bus ticket to take him home to Arizona, walking miles to a McDonald’s restaurant where the bus was to pick him up. But even that ride was an ordeal, he says—the bus broke down, turning what should have been a 12-hour trip into a journey that lasted two full days.

“It Was Obvious That American Airlines Had The Wrong Person.”

Upon returning to his home in Arizona, Lowe began to investigate what had happened. When he was finally able to reach a detective with DFW police—identified only as Detective Torres in the complaint—he says he got more bad news: Lowe was supposed to have appeared in court in Tarrant county that very day, and because he didn’t another warrant would be issued.

Lowe said that when he asked Torres for the basis of the charges against him, he was told only that it was based on information provided by American Airlines—and reminded that he was required to surrender himself to authorities.

That’s when Lowe decided to get a lawyer.

At some point, the complaint says, Torres did compare Lowe’s booking photo from Quay County to the pictures of the suspect in the airport burglary.

“[I]t was obvious that American Airlines had the wrong person, and that Mr. Lowe was not the person responsible for the burglary on May 12, 2020,” the complaint says.

Lowe’s attorney, Scott Palmer, subsequently contacted Torres and the Tarrant County District Attorney’s Office and confirmed that both the felony and misdemeanor charges against Lowe have been dropped.

In his complaint, Lowe says that he is a “changed man” who no longer enjoys the things he used to do, such as camping and spending time outdoors.

“Like a low-grade fever, these symptoms of the trauma he experienced have occasioned a malaise that has taken much of the enjoyment out of life,” the complaint says.

Lowe, who is described as a “professional outdoorsman and career guide,” also alleges that he suffered “substantial economic damages because of his wrongful arrest,” including a two-week tour to Alaska for business clients that had been planned for months. He says he also had to cancel subsequent trips until after September 2021, when the warrants were removed.

Lowe is suing for negligence. He does not name a specific damages amount.

“As required by law, American cooperates with and responds to court orders for information related to possible criminal activity, and that’s what we did in this instance when we were presented with a search warrant,” a representative for American Airlines said in a statement emailed to Law&Crime.

Bizarre mistaken identity incidents aren’t as rare as you might think.

Read the complaint on the latest such incident here:

Editor’s note: This story was updated on June 8 with a statement from American Airlines.