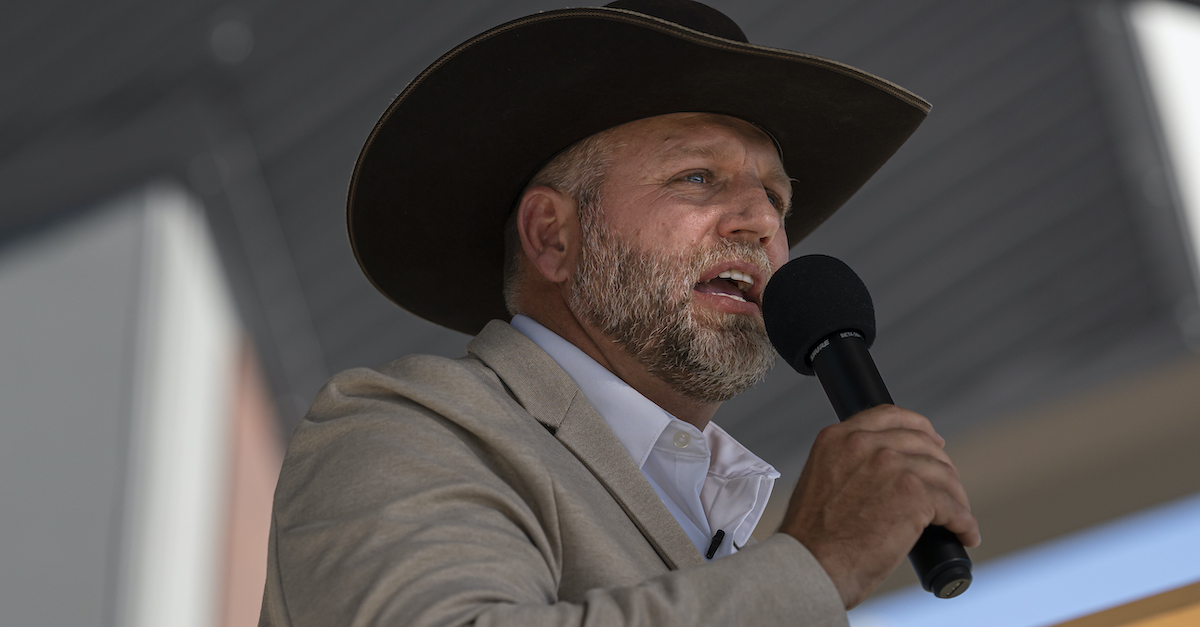 Ammon Bundy announces his candidacy for governor of Idaho during a campaign event on June 19, 2021 in Boise, Idaho.

The anti-government militant known for his 41-day armed standoff at a wildlife refuge more than half a decade ago has been sued for a “knowingly dishonest and baseless smear campaign” accusing an Idaho hospital of trafficking and killing children.

“It is important for us to stand up to the bullying, intimidation and disruption, and the self-serving and menacing actions of these individuals, for the protection of our employees and patients, and to ensure our ability to serve our community,” St. Luke’s president and CEO Chris Roth wrote in a statement. “St. Luke’s has not been the only target of these individuals and believes that no one should be subject to such abuse. Inaction would signal this type of behavior is acceptable in our community. It is not.”

Roth is another co-plaintiff in the lawsuit, as is Natasha D. Erickson, a pediatric physician at the hospital.

In 2014, Bundy exploded on the national stage with his armed standoff with federal officials in Bunkerville, Nevada, and he remained in the headlines two years later for the occupation of the Malheur National Wildlife Refuge in Oregon. Prosecutions related to both incidents fizzled, the first from a judge-ordered mistrial with prejudice and the latter via an acquittal by a jury.

Now an activist, Bundy announced his run for Idaho governor last June, and the hospital claims he and his followers slimed them for political and financial gain.

“Seeking to benefit financially and to enhance their standing among their followers, Bundy (a candidate for Governor and founder of the activist People’s Rights Network) and Rodriguez (an aspiring political and religious figure and consultant for the Bundy Campaign) acted in concert with the other Defendants to launch a knowingly dishonest and baseless smear campaign that claimed Idaho State employees, the judiciary, the police, primary care providers, and the St. Luke’s Parties engaged in widespread kidnapping, trafficking, and killing of Idaho children,” the lawsuit begins.

The hospital alleges that campaign depended on Bundy and his followers using “slick marketing tactics” to vilify St. Luke’s Health System, St. Luke’s Regional Medical Center, Roth and Erickson: “Indeed, they publicly declared that they wanted to subject the St. Luke’s Parties to unrelenting public shaming that would cause reputational damage and humiliation of such intensity that SLHS and SLRMC would be run out of business and Mr. Roth, CEO of SLHS, and Dr. Erickson, a St. Luke’s pediatric physician, would lose their careers and be shunned by their friends, colleagues, neighbors, spouses, and children.”

In a heavily redacted portion of the complaint, St. Luke’s describes parents taking an infant to the St. Luke’s Boise emergency room on March 1. The infant struggled with oral feeding, and the parents consented to all of the care provided, the hospital says.

According to the lawsuit, the state’s Department of Health and Welfare intervened after the parents failed to attend follow-up appointments, and police took custody of the infant on March 11.

Though the parents did not provide medical information, the hospital says, they consented to the infant’s treatment plan.

“St. Luke’s did not vaccinate the Infant against the wishes of the parents,” the complaint states. “The St. Luke’s Parties did not ‘harm [the Infant] in irreparable ways.’ Nor did they ‘abuse’ the Infant. As explained below, such statements were false and were intended to attract media attention, incite followers, collect donations, disrupt hospital operations, and defame the St. Luke’s Parties.”

The hospital says that Bundy and his followers started protesting at the ambulance bay on March 12, the day after police took custody of the infant.

“They realized that the facts surrounding DHW’s intervention could be mischaracterized as a governmental conspiracy to kidnap, traffic, and kill children. Then, in turn, Defendants realized they could establish themselves as crusaders against their falsely manufactured governmental conspiracy,” the complaint states. “To that end, Defendants worked together to manufacture a false narrative of a state-sponsored child kidnapping and trafficking ring that included DHW, the police, the Idaho Judiciary, the Infant’s PCP, and the St. Luke’s Parties.”

Three days later, St. Luke’s says, the infant was healthy enough for outpatient services and returned to the family via the Department of Health and Welfare on March 28.

According to the hospital, Bundy falsely claimed that his protest led to the infant’s release, but St. Luke’s says that what he really caused was havoc.

“Recognizing that Bundy’s followers were growing more numerous and menacing, a hospital supervisor tried to reason with Bundy and deescalate the situation,” the complaint states. For the benefit of those there to film him, Bundy responded by accusing the supervisor of kidnapping and then demanded that he give Bundy the infant. Bundy knew full well he had no legal authority to make that demand because he had no parental rights over the infant.”

St. Luke’s says that Bundy also knew he was breaking the law, which was disseminated on social media.

“Hospital staff repeatedly warned Bundy and his followers to clear the ambulance bay,” the complaint states. “Bundy heard and refused to heed the warnings on at least three occasions. Bundy knew the police had no option but to arrest him for trespass. As he intended, the police arrested him just before 2:00 a.m. on March 12, 2022.”

The complaint calls that part of a pattern: “Bundy has a history of forcing confrontation with police to generate publicity for himself and his political agenda.”

The hospital seeks punitive damages for eight counts of defamation, harassment, trespass, unfair business practices, intentional infliction of emotional distress and other charges. St. Luke’s pledged to donate any damages that the hospital may be awarded to Children at Risk Evaluation Service (CARES), a program for neglected or abused kids.