Oath Keepers Founder’s Estranged Wife Tells Why She Asked a Judge to Keep Ex in Jail, Fears He’ll Take Their Kids and Become ‘Brownshirt’ for Trump 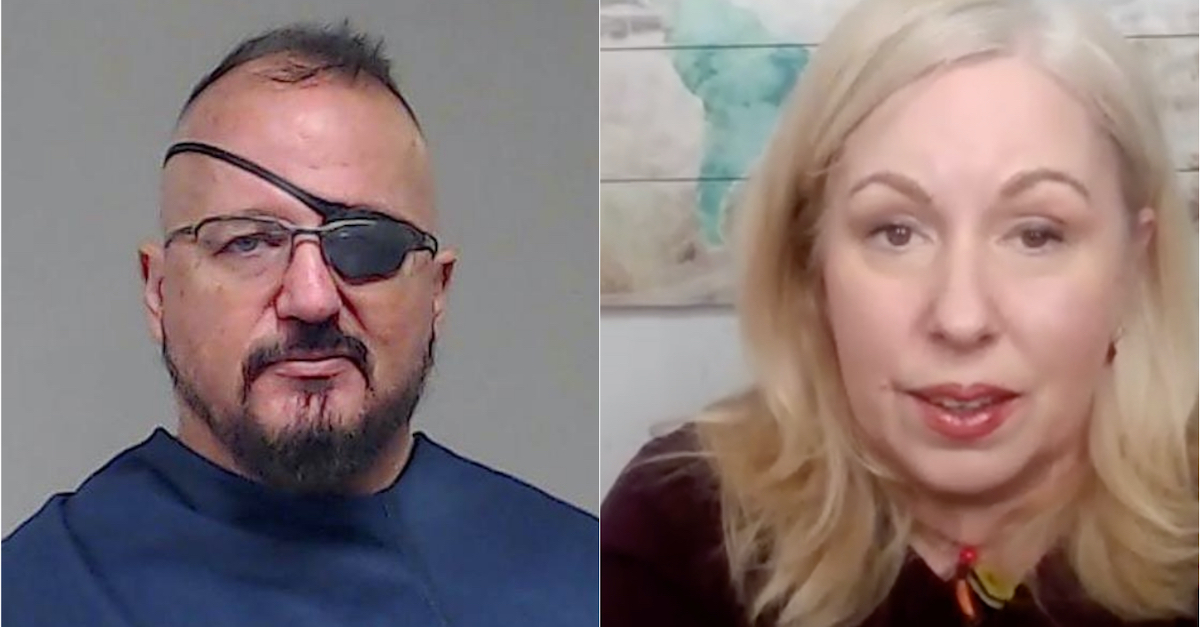 Tasha Adams (right), the estranged wife of Stewart Rhodes (left), sounds off on the detention of the Oath Keepers founder on Law&Crime’s podcast “Objections: with Adam Klasfeld.”

Listen to the full episode wherever  you get your podcasts, and subscribe.

When Oath Keepers founder Stewart Rhodes first had a detention hearing following his seditious conspiracy indictment, his estranged wife Tasha Adams felt certain that he would be locked up and kept away from her and their six children.

Then, Adams noticed an alarming report in Politico report suggesting that a federal judge appeared ready to let her ex loose.

“I got a little panicked,” Adams told Law&Crime in an interview with Law&Crime’s podcast “Objections.” “I really thought it was a done deal. Like, I didn’t not expect any chance of bail whatsoever.”

“Our Life Evolved Around Him Escaping”

On Jan. 13, 2022, federal authorities finally arrested Rhodes more than a year after the Jan. 6, 2021 attack on the U.S. Capitol. Prosecutors previously had thinly veiled his name in court documents in the Oath Keepers conspiracy docket as “Person One,” and Rhodes’s defense team made that delay a central counterpoint in favor of his release. They argued that prosecutors could not consider him a dangerous threat to the republic, on the one hand, and allow him keep his freedom for a full calendar year during a public investigation, on the other.

As Politico reported, that appeared to resonate with U.S. Magistrate Judge Kimberly Priest Johnson—at least, that was until Adams picked up her phone and dialed the judge’s chambers.

“I just really thought, ‘I don’t know if this message is going to get through,’ and then, before I can even punch in one number for the U.S. Attorney, they called me right back,” Adams recalled. “The judge said, ‘We are reconvening within 10 minutes.’ We had multiple attorneys on the phone, and I was a little shocked. But I mean, this was our life.”

Whether on not her words were the deciding factor, Adams made a clear impact in a 17-page ruling keeping her estranged husband in jail.

“Ms. Adams testified that she fears for her safety and the safety of her six children should defendant be released,” the judge wrote in a Jan. 26 ruling. “Ms. Adams testified that throughout their marriage, Defendant would often brandish firearms in the family home to control her behavior and that Defendant would physically abuse his children under the guise of participating in ‘martial arts practice.'” 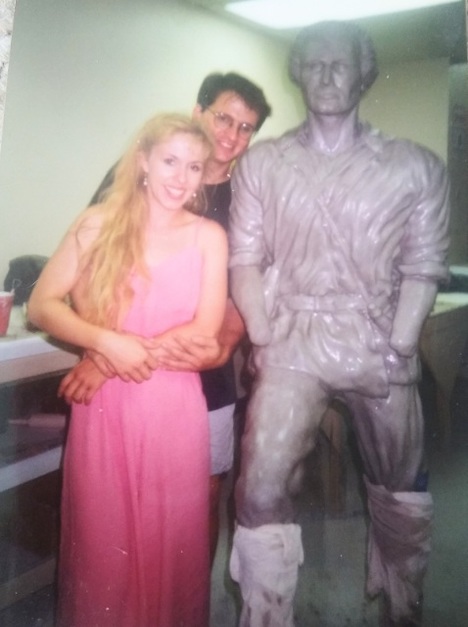 Stewart Rhodes (center) poses with his then-soon-to-be wife Tasha Adams (left) and a sculpture he made of a Minuteman in the year 1993. (Photo courtesy of Ms. Adams)

Telling the judge that Rhodes obsessed about being “picked up by the feds,” Adams testified that he would create “elaborate escape tunnels.” She elaborated on this during the interview with Law&Crime’s podcast “Objections: with Adam Klasfeld,” claiming that Rhodes worried about being arrested in connection with the standoff at the Bundy ranch years before the attack on the U.S. Capitol.

“Our life revolved around him escaping. ‘One day, if the feds ever came in,’ and this was our life for years. It’s all he talked about. You know, I always thought it was silly. You know, it always seemed ridiculous. But then as he got further and further into the Oath Keepers he was creating it as a reality, that it might actually happen,” Adams said.

In an extraordinary interview, Adams detailed her allegations of physical abuse, the history of the Oath Keepers, and her fears that Rhodes may harm her children and become a “Brownshirt” acting as an “unseen arm” of former President Donald Trump, if released.

“He Knows That Trump Lost”

After nearly 25 years of marriage between 1994 and 2018, Adams filed for a divorce with Rhodes, who was a Yale Law School graduate and lawyer before he founded an extremist militia group allegedly behind the Jan. 6 siege of the U.S. Capitol. She says that Rhodes used his legal training to try to intimate and control her during those proceedings.

“He’s a powerful lawyer, he would always give parables about women who wind up in mental institutions and lose their kids and how it would happen,” she recalled. “And he always told me stories like that. And a lot of women are unstable, and they have to be locked up. When they lose their kids—and reminding me that he’s an intelligent lawyer with a law degree, and he has all these powerful friends.” 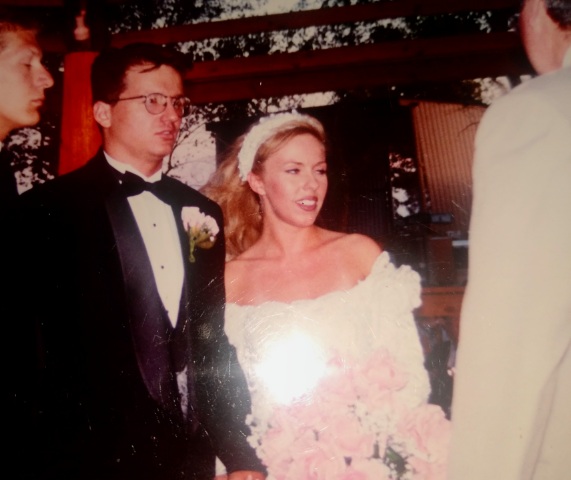 According to Adams, Rhodes’s legal training gave him a knack for creating plausible deniability, even in his treatment of her and their children.

“He always wants deniability, legally, so he’ll never just hit you, but he’ll accidentally hit you,” she said.

Then, she says, her estranged husband’s behavior escalated.

“It got to where he was punching my son, who was a teenager at that point, and my son would never just say to stop,” Adams continued. “And even when he was maybe like, 13— when he was just still a kid, you know—just punch him right in the face.”

Adams claims that Rhodes would blame these episodes on his own “rough upbringing” and physical abuse as a child, before denying what just happened.

“Then, 30 seconds later—I never knew if he was just convincing himself or just gaslighting—he would immediately say, ‘Wow, I’m so glad I’m the type of person that would never hit one of my kids. Even though I lost my temper, I would never hit you. Right, right?’ And you’d have to agree! It was really strange.”

In Adams’s view, Rhodes is manipulating his acolytes in the extremist group that he founded in the same way. Court documents show the Oath Keepers leader claiming that the 2020 U.S. presidential election was stolen from Trump and calling for an uprising on par with the one that toppled Slobodan Milošević in Serbia.

Unlike Milošević, Joe Biden won the election fairly, and Adams believes her former husband knows that.

Asked why she believes that, she responded: “Because he’s intelligent, but he knows how to use people. And he uses people’s wishes against them and what they want to believe. And he manipulates them. And I just think he absolutely knows that that is ridiculous. But he knows that’s what people want to believe.”

In this messaging too, Adams suspects that Rhodes is using his legal training.

“I believe it’s part of his legal strategy to try to claim that he was just trying to uphold the true President of the United States,” she added. “I don’t think that’s gonna fly with the Washington, D.C. jury. I think they know better than that. But yeah, and the whole thing is just a con really.”

“The Unseen Arm of a Possible Trump Administration”

Marrying Rhodes in 1994, Adams witnessed the evolution of the Oath Keepers, a group that she recalls springing up years later in quite a different form. Today, extremism watchdogs know the Oath Keepers as an anti-government group of the far-right formed in 2009, the year that Barack Obama became the nation’s first Black president.

The Southern Poverty Law Center suggests that timing was no accident, but Adams believes there was a time when the Oath Keepers saw itself as an ally to the racial justice movement as the “libertarian version of the ACLU.”

“Had the original Oath Keepers been around during the time of George Floyd, they would have been on the other side of it, no question,” Adams asserted.

In fact, the Oath Keepers acted more as antagonists to the Black Lives Matter movement after nationwide protests in the wake of Floyd’s murder by then-police officer Derek Chauvin in 2020. Rhodes called the social unrest the work of “thugs” who became “domestic enemies” by “burning, killing and looting.”

But Adams claims that was an Oath Keepers of a different time.

As its name suggests, the Oath Keepers was composed of former members of the U.S. military and law enforcement—like Rhodes, an Army veteran—pledging to honor their commitments to defend the Constitution over the orders of any leader.

As Rhodes made allies with figures from one-time fringe presidential candidate Ron Paul to the tea party movement, the Oath Keepers kept lurching in a far-right direction.

“Then again, comes the Trump train, and then all of a sudden this political organization—that at one point lost half its board members saying that you can’t do no-knock raids—is supporting Trump,” she said. “It’s completely bizarre, less bizarre, if you understand that he goes after waves of people and energy to try to absorb them for himself as much as possible.”

Now, Adams believes that Rhodes hitched his personal and political fortune to the 45th president. Prosecutors say that Rhodes prepared a so-called quick reaction force, or QRF, for battle on the streets of Washington, D.C., by having them stash firearms inside a Comfort Inn across the Virginia border.

Citing his encrypted messages, prosecutors claim that Rhodes told those Oath Keepers to brace for a “worst case scenario” where Trump would order them to ferry those weapons across the Potomac River on Jan. 6. That extraordinary scenario never came to pass, but Adams found it plausible there was “some connection there.”

“Not directly to Trump, but maybe, you know, maybe through multiple people and channels,” she said.

Primarily concerned for herself and her children—and still fundraising for the legal fees for her divorce—Adams said that she also fears her estranged husband will become an “unseen arm of a possible Trump administration” if acquitted.

“You know, sort of a Trump Brownshirt,” she added, referring to the paramilitary gang that aided Adolf Hitler’s rise to power in Nazi Germany.

In Adams’s view, Rhodes likely believes he will be vindicated, and he will take his chances on a trial in light of Ammon Bundy and Ryan Bundy’s acquittals in 2016.

“I think that he believes he can beat this partially because he believes in himself in a really strange way,” she said. “He believes that he is sort of a chosen person, and I think he believes he almost has magical powers.”

Adding that their children call Rhodes the “King of the Apocalypse,” Adams said: “He really does think that he’s a great historical figure.”

Since losing his initial motion for pre-trial release in Texas, Rhodes’s case has been transferred to the District of Columbia. His defense attorneys have asked a judge there to reconsider the decision. He faces the possibility of decades imprisonment if convicted of seditious conspiracy, obstructing an official proceeding and other charges.