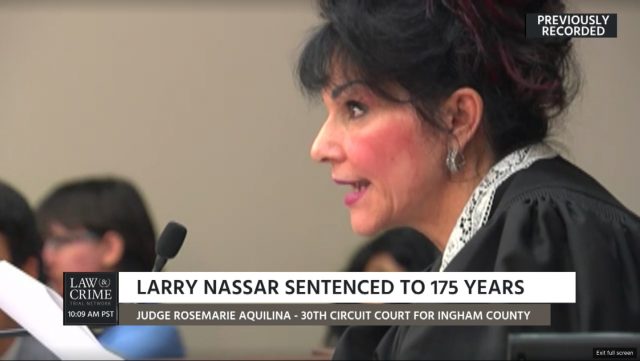 Larry Nassar was sentenced to 40-175 years in prison by Judge Rosemarie Aquilina on Wednesday afternoon.

Prior to handing down Nassar’s sentence, Aquilina tore into the disgraced doctor’s words from a letter apparently penned just last week in which Nassar referenced William Congreve‘s famously quasi-misogynistic line, “Hell hath no fury like a woman scorned.”

In that segment of the letter, Nassar wrote, in part:

I was a good doctor because my treatments worked and those patients that are now speaking out were the same ones that praised and came back over and over. And referred family and friends to see me. The media convinced them that everything I did was wrong and bad. They feel I broke their trust. Hell hath no fury like a woman scorned. It is just a complete nightmare.

The courtroom oohed and aahed as the dismissive line was quoted from the strangely inapposite letter. Earlier on Wednesday, prior to his sentencing, Nassar had expressed some amount of sorrow and remorse for what he had done to his victims over so many years, saying, “There are no words to describe the depth and breadth of how sorry I am for what has occurred. An acceptable apology…to all of you is impossible to write and convey.”

Nassar wrote the letter in question after his plea deal with federal prosecutors resulted in a 60-year sentence on charges of possessing child pornography, as well as after he pleaded guilty in the current case. Aquilina first explained her reasoning for reading from Nassar’s letter. She said:

Sir, the media has asked me to release your letter. Counsel may object. The media may object. But there is some information in here that troubles me in regard to the victims. And I don’t want them re-victimized by the words that you have in here. But I do want to read some more of your letter and the reason I want do that is because I’ve considered it in sentencing as an extension of your apology and whether I believe it or not. So, I want you to hear your words. I’ve already read some and I’m not reading every line. So, let me begin.

Judge Aquilina then read from six distinct passages in the multiple-page letter. She started out by reading Nassar’s complaining summation of his federal case. He wrote, “The federal judge went ballistic at sentencing since I plead guilty to the state cases and spent 10 percent on the federal case and 90 percent on the state cases and civil suits. She gave me 60 years instead of 5-20 years (three consecutive 20 year sentences)…”

Then Aquilina read from the fifth and sixth passages–the one containing the offending line–which has been reproduced in full immediately below [emphasis added].

I was a good doctor because my treatments worked and those patients that are now speaking out were the same ones that praised and came back over and over. And referred family and friends to see me. The media convinced them that everything I did was wrong and bad. They feel I broke their trust. Hell hath no fury like a woman scorned. It is just a complete nightmare. The stories that are being fabricated to sensationalize this. Then the AG would only accept my plea if I said what I did was not medical and was for my own pleasure. They forced me to say that or they were going to trial and not accepting the plea–I wanted to plead no contest, but the AG refused that. I was so manipulated [the courtroom bursts out into brief, restrained fits of laughter] by the AG and now Aquilina and all I wanted was to minimize stress to everyone like I wrote earlier….In addition with the federal case, my medical treatments with the Olympic/National team gymnastics were discussed as part of the plea. The FBI investigated them in 2015 and found nothing substantial because it was medical. Now they are seeking the media attention and financial reward.

As she finished, Aquilina forcefully tossed Nassar’s letter aside and glared at the defendant. She asked, “Would you like to withdraw your plea?” Nassar and his counsel appeared to mutter in shock before someone signaled in the negative. Aquilina continued, “Because you are guilty aren’t you? [beat] Are you guilty, sir?”

To which Nassar finally and sullenly replied, “I accept my plea, exactly.”