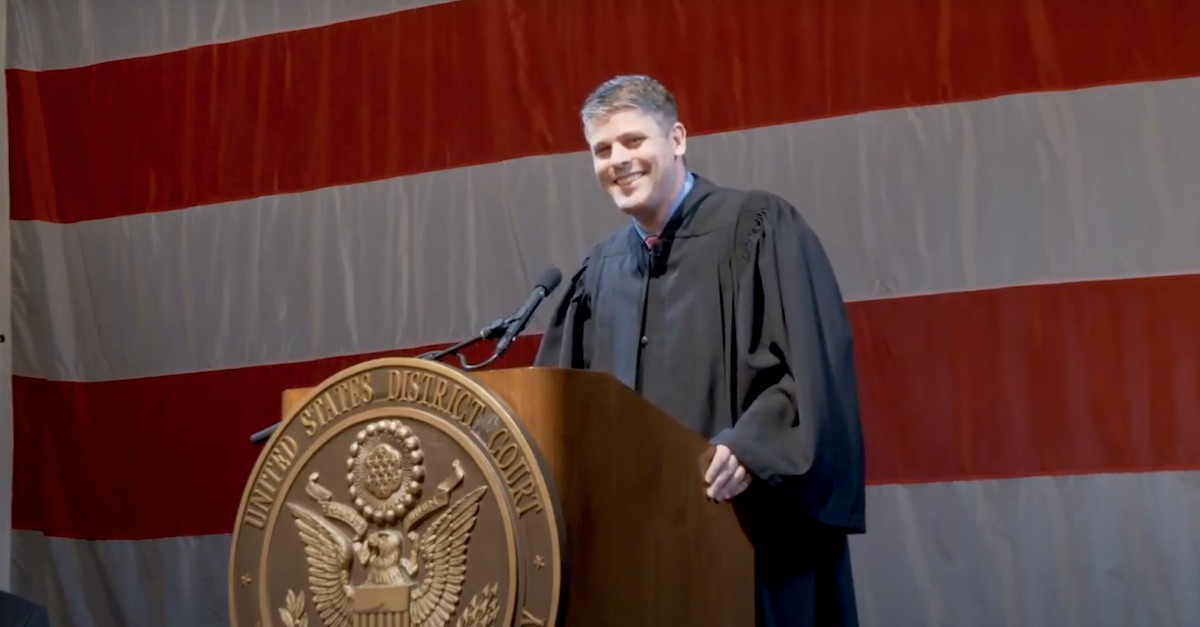 The chancellor of the Philadelphia Bar Association on Tuesday weighed in on U.S. District Judge Justin Walker’s nomination to the Court of Appeals for the District of Columbia. Effectively repeating much of what the American Bar Association said before Walker was confirmed to the district court, Chancellor A. Michael Snyder, a retired judge, said that Justice Brett Kavanaugh’s 38-year-old former law clerk simply doesn’t have the trial or judicial experience to sit on such a “lofty” appellate court.

“Recently, the President has nominated Judge Justin Walker, only recently confirmed as a U.S. District Judge for the U.S. District of Western Kentucky, as a nominee for a seat on the United States Court of Appeals for the District of Columbia Circuit. Judge Walker only took his seat on the District Court in October, 2019. At the time of his nomination to the District Court, Judge Walker received a rating of ‘Not Qualified’ by the American Bar Association,” Snyder began. “This negative appellation was based on the complete lack of trial experience of the then Mr. Walker. Indeed, prior to his nomination, Judge Walker had never tried a case and had never acted as second chair on a case before a court.”

“Now, with Judge Walker’s nomination by the President to take a seat on the Court of Appeals for the District of Columbia Circuit, the President has proposed elevating a very young judge, with only approximately 6 months of judicial experience, to a seat on what is viewed by many as the second most powerful Court in the United States. Cases heard in the D.C. Circuit Court of Appeals deal with truly national issues, and are regularly brought to the U.S. Supreme Court for ultimate review,” Snyder said.  “Despite the scant judicial record established by Judge Walker, and despite the fact that Judge Walker only received his formal investiture to the District Court in March of this year, the President, supported by Senator Mitch McConnell (R-Kentucky), nominated Judge Walker to the Circuit Court only three weeks after the investiture ceremony.”

The statement credited Walker’s “meritorious academic record at both Duke University and Harvard Law School,” but said academic achievement without trial experience “does not qualify someone for an appointment to such a lofty judicial position.”

The last line urging the Republican-led Senate not to confirm Walker is a step beyond what Senate Democrats recently hoped for out loud. They asked Senate Judiciary Committee Chairman Sen. Lindsey Graham (R-S.C.) to focus on the pandemic response instead of moving forward with the appointment of another young, conservative judge to the D.C. Circuit for a lifetime. A hearing was set for Wednesday, May 6.

Remarkably, the ABA saw fit to say on Tuesday afternoon that Walker is “well qualified” for the D.C. Circuit role.

Wow —> the American Bar Association, after deeming Justin Walker not qualified to be a district judge, calls him “well qualified” for the D.C. Circuit pic.twitter.com/n1iVsVaPNl

President Donald Trump, who has already appointed Gregory Katsas and Neomi Rao to the D.C. Circuit, recently criticized Democrats for attempting to shut down the confirmation process, even though the Senate is majority Republican. Trump said that many of these candidates for lifetime appointments could probably be vetted in an hour’s time.

Walker was a clerk for Justice Kavanaugh when Kavanaugh was a circuit judge on U.S. Court of Appeals for the D.C. Circuit. Walker would replace soon-to-be retiring George W. Bush-appointed Judge Thomas Griffith.

The Senate confirmed Walker to the U.S. District Court for the Western District of Kentucky in Oct. 2019 despite outcry by Democrats and the ABA about his qualifications or lack thereof. Prior to his confirmation to the district court, the ABA gave Walker a “not qualified” rating. The ABA said that Walker was too inexperienced to serve on the federal bench.

Walker, who was a law professor at the University of Louisville and is a long-time Federalist Society member, simply did not have the trial experience to merit a qualified rating, the ABA said.

“The Standing Committee believes that Mr. Walker does not presently have the requisite trial or litigation experience or its equivalent,” the chair of the ABA’s Standing Committee Paul T. Moxley wrote in 2019. “Mr. Walker’s experience to date has a very substantial gap, namely the absence of any significant trial experience. Mr. Walker has never tried a case as lead or co-counsel, whether civil or criminal.”

Around the 2:30-mark of the video, Walker turned to Kavanaugh, who spoke earlier in the ceremony and administered Walker’s oath of office.

“Justice Kavanaugh, what can I say … that I haven’t already said … on Fox News?” Walker asked, obviously referring to his defense of Kavanaugh during the aforementioned Supreme Court confirmation hearings. The audience laughed.

Walker thanked the Senate majority and made a point to say to the Senate minority, “No hard feelings.”