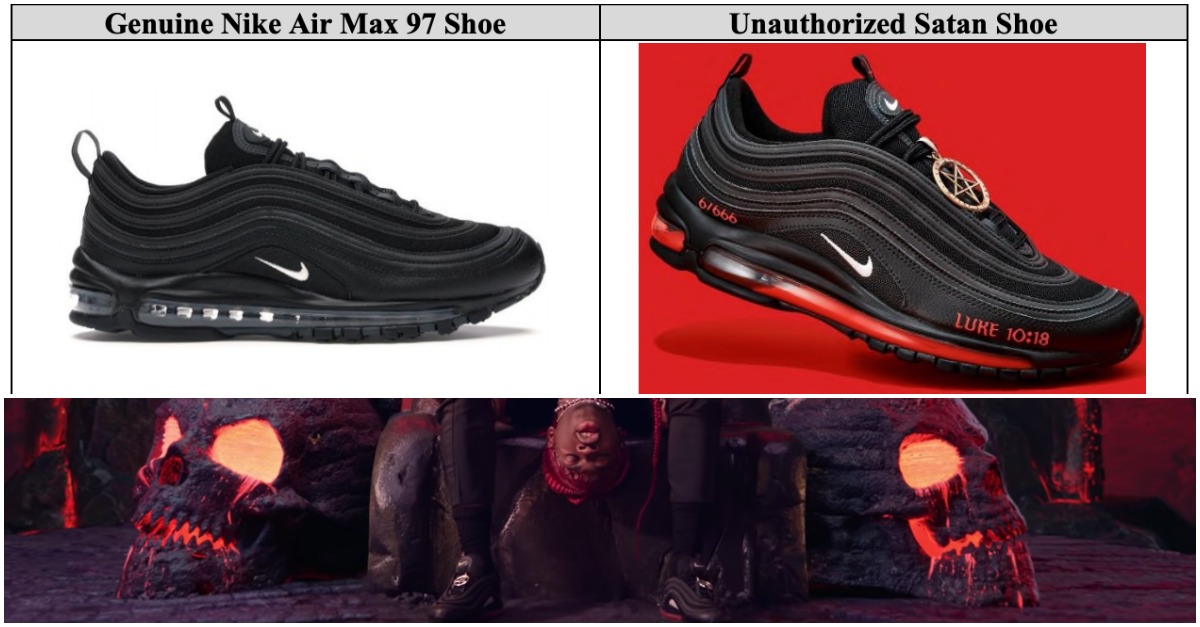 Biblical in theme, allegory and extended metaphor, the visual single for “MONTERO (Call Me By Your Name)” features the protagonist’s fall from grace and subsequent expulsion from paradise.

From there, the instantaneous legend of two musical genres is featured as a criminal brought in shackles before a pharaoh-like authority, then an angel ascendant, and finally, a Garth Ennis-style antihero who plunges into the depths of Hell. He goes on to seduce and kill the Morning Star, stealing his throne and finally becoming a hybrid angel of fulfilled want, therefore spreading his wings.

During the country music/hip-hop superstar’s successful use of sexual deceit in the video, Satan is pictured wearing a modified version of black Nike Air Max 97s. The shoes are emblazoned with typical Christian and occult iconography such as “666,” a dangling and glittering inverted pentagram and “Luke 10:18,” which, according to the King James Version of the Bible, reads: “And he said unto them, I beheld Satan as lightning fall from heaven.”

The midsole also contains a bit of human blood and a lot of red ink.

According to Nike, the manufacturer of those shoes, MSCHF Product Studio, Inc. is violating the company’s trademark by manufacturing and selling the aptly-described “Satan Shoes” online.

“MSCHF is currently taking orders for shoes it refers to as Satan Shoes, which are customized Nike Air Max 97 shoes that MSCHF has materially altered to prominently feature a satanic theme,” the 24-page lawsuit filed in the Eastern District of New York (EDNY) on Monday begins. “This was done without Nike’s approval or authorization, and Nike is in no way connected with this project.”

Nike’s lawsuit is premised on the two key ideas inherent in trademark law: (1) that a business’s trade name should (and legally must) be proactively protected against from knockoff-hawking pretenders who would otherwise confuse consumers; and (2) thereby harm a seller’s ability to maintain their goodwill in the marketplace. Here, there’s no pretense about rights or artistry—such as is common in copyright litigation—trademarks are all about capitalism.

One of the foremost dangers the law aims to protect against is what federal law refers to as “trademark dilution by tarnishment,” which is one of the four causes of action listed in the lawsuit. There’s also the separate cause of action which federal law calls “false designation of origin,” which courts generally refer to as the concept of “confusion.”

The complaint says as much—alleging that consumers are being misled by the company and that religiously-minded Nike fans are rethinking their sneaker loyalty in light of their loyalty to God.

Nike has not and does not approve or authorize MSCHF’s customized Satan Shoes. Moreover, MSCHF and its unauthorized Satan Shoes are likely to cause confusion and dilution and create an erroneous association between MSCHF’s products and Nike. In fact, there is already evidence of significant confusion and dilution occurring in the marketplace, including calls to boycott Nike in response to the launch of MSCHF’s Satan Shoes based on the mistaken belief that Nike has authorized or approved this product.

In trademark law, consumers need to be sure they don’t mistakenly buy an unaffiliated product and protections enable them to minimize their own market research. Sellers say they are more inclined to continuously create new forms of high-quality consumption if free riders are kept at bay. And, overall, this benefits the public, courts believe, because the trademark system encourages competition.

“Nike files this lawsuit to maintain control of its brand, to protect its intellectual property, and to clear the confusion and dilution in the marketplace by setting the record straight,” the lawsuit goes on. “Nike has not and does not approve or authorize MSCHF’s customized Satan Shoes. As an innovative brand that strives to push the envelope and do the right thing, Nike knows it may not please everyone all of the time. But decisions about what products to put the SWOOSH on belong to Nike, not to third parties like MSCHF. Nike requests that the Court immediately and permanently stop MSCHF from fulfilling all orders for its unauthorized Satan Shoes.”

And, on a more basic level, Nike has also alleged that MSCHF has used Nike’s registered trademarks in commerce. This is a threshold consideration and an integral aspect of any successful trademark lawsuit. Essentially, the company is just pointing to the fact that modified Nikes bearing the Swoosh are being marketed and sold. Technically this is something the company would have to prove but it is unlikely to be an actual consideration if MSCHF doesn’t immediately agree to settle.

Nike is seeking an injunction, various forms of damages—and they want every pair of Satan Shoes in MSCHF’s possession (as well as any and all marketing materials related to the sneakers at issue) destroyed.

Law&Crime reached out to MSCHF via their app but no response was forthcoming at the time of publication.