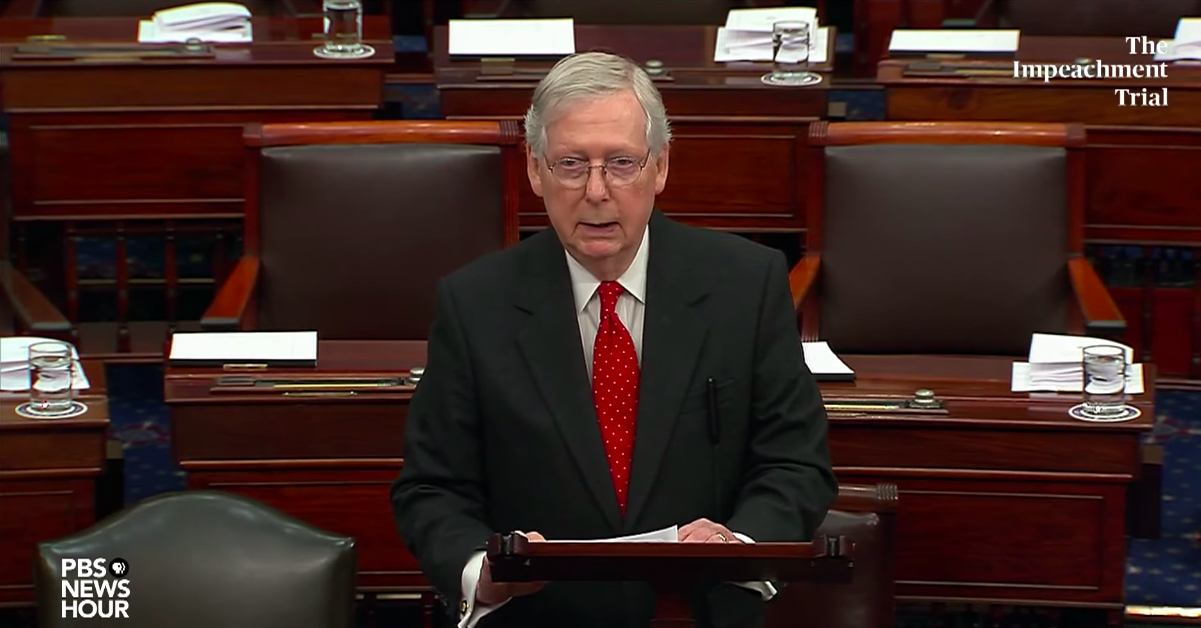 Senate Majority Leader Mitch McConnell (R-Ky.) on Tuesday defended his controversial resolution of impeachment trial rules as “fair” and “evenhanded” while castigating Democrats for demanding to hear from witnesses not called during the House’s investigation.

Speaking from the Senate floor, McConnell said his rules resolution, which states that the chamber can consider whether to call new witnesses after opening arguments and questions, was the same framework passed by all 100 Senators to govern the impeachment trial of Bill Clinton.

“These are potential witnesses the House managers themselves declined to hear from. Whom the House itself declined to pursue through the legal system during its own inquiry, “McConnell said. “If they wanted witnesses who would trigger legal battles over presidential privilege, they could’ve had those fights. But the Chairmen of the House Intel Committee and House Judiciary Committee chose not to. They decided their inquiry was finished and moved right ahead. The House chose not to pursue the same witnesses they apparently would now like the Senate to pre-commit to pursuing ourselves”

The Kentucky Senator said that House Democrats were essentially asking the Senate to supplement their investigation, which could trigger the same legal battles over executive privilege.

“Some of the proposed new witnesses include executive branch officials whose communications with the President and other officials lies at the very core of the president’s constitutional privilege,” McConnell stated.

“Pursuing those witnesses could indefinitely delay the Senate trial and draw our body into a protracted and complex legal fight over presidential privilege. Such litigation could potentially have permanent repercussions for the separation of powers and the institution of the presidency.”

The Majority Leader only has to convince 51 of his GOP colleagues to follow his lead to dictate the terms of the proceeding, but Supreme Court litigator and former acting U.S. Solicitor General Neal Katyal pointed out that McConnell’s argument “contradicts itself.”

First, he notes that the House never “declined to hear from witnesses,” they made a reasoned decision against litigating every witness because they “didn’t want to get bogged down in long court fight.”

McConnell speech totally contradicts itself. It first claims the House “declined to hear from witnesses.” House of course never “declined”—they didn’t want to get bogged down in long court fight.

Then McConnell says witnesses shouldn’t be called in Senate. His reason? Omg …

McConnell then relies on the same logic to conclude that new witnesses should not be called in the Senate.

“He says that would lead to a lengthy court fight and generate destructive precedent. This is precisely what he said should have happened in the House! Makes zero sense,” Katyal wrote. He also said that such an argument is null in the Senate, as Chief Justice John Roberts may rule on issues of executive privilege quickly during the trial.

“McConnell argument thus boomerangs. It demonstrates that he will do anything, and say anything, to try to prevent the American people from learning the truth,” Katyal continued. “It should be simple- If the President’s behavior was perfect & beautiful, why are they so afraid of documents+witnesses?”

It demonstrates that he will do anything, and say anything, to try to prevent the American people from learning the truth.

It should be simple-If the President’s behavior was perfect&beautiful, why are they so afraid of documents+witnesses?