Federalist Society Co-Founder: Trump’s Impeachment Defense Is Like Arguing a President Can’t Be Convicted for Wearing a Swastika 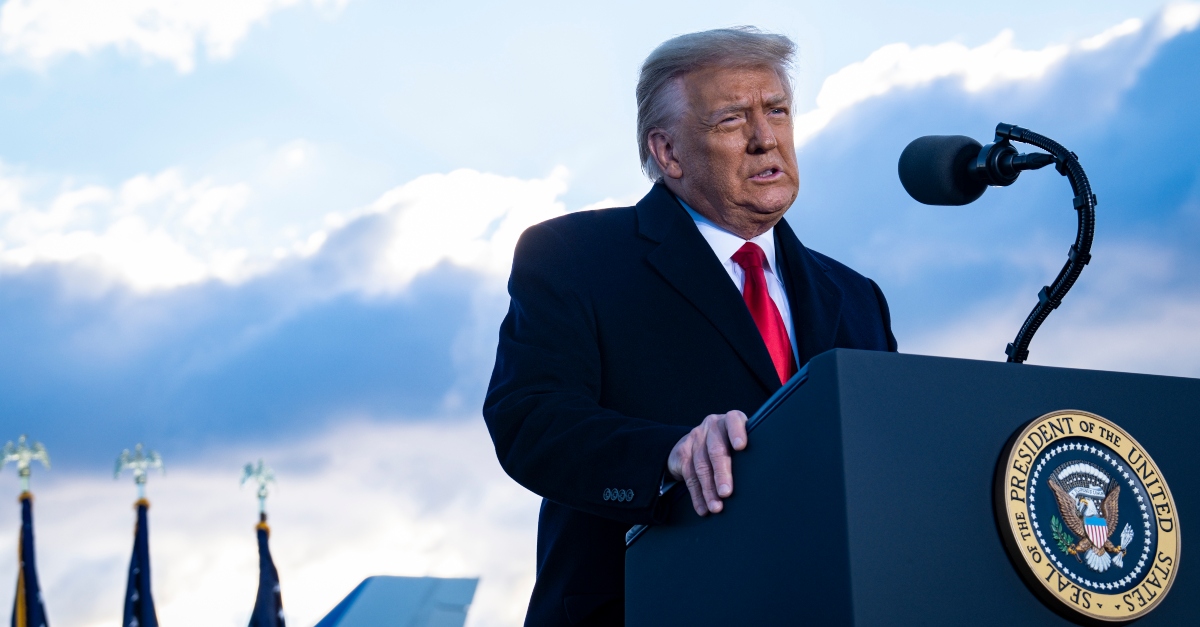 It’s been apparent for some time that Donald Trump’s impeachment defense would focus, to some extent, on the idea that the former president should not be convicted in the Senate for inciting an insurrection because the words he uttered on Jan. 6 were protected by the First Amendment. Finding protected speech a political crime, the argument goes, would have a chilling effect on any current or future high office-holder, wrongly holding them liable for the actions of individuals who are responsible for their own behavior. A co-founder of the conservative Federalist Society countered that argument on Monday by saying it’s absurd to suggest that a president could not be impeached for wearing a swastika while marching in a Nazi rally or for burning the American flag—both of which are activities protected by the First Amendment.

Peter Keisler, a lawyer and former acting Attorney General of the United States during the George W. Bush era, was joined by attorney and former Antonin Scalia clerk Richard Bernstein in arguing that the First Amendment defense raised by Trump lawyers is “wrong.” From their op-ed in The Atlantic:

To start, let’s examine how breathtaking Trump’s argument is. His advocates are relying on the 1969 Supreme Court case Brandenburg v. Ohio, which held that the First Amendment prohibits criminal liability for advocating violence that is not imminent. According to their theory, Congress could not impeach, convict, remove, or disqualify a president who, like Clarence Brandenburg, spoke at a Ku Klux Klan rally in a white hood, advocated violence, used the N-word repeatedly in declaring that African Americans should be forcibly returned to Africa, and proclaimed that “the Jew” should be sent to Israel.

The argument here from Keisler and Bernstein echoes that of 100-plus constitutional scholars from late last week.

Among the undersigned was Steven Calabresi, also a Federalist Society founder. Calabresi, the Clayton J. & Henry R. Barber Professor of Law at Northwestern Pritzker School of Law, recently made a point to agree with Norm Eisen in the pages of the New York Times that then-President Trump committed “egregious impeachable offenses” and should be convicted in the Senate.

Keisler, for his part, noted that “a central object of the Constitution was to restrain a government leader who was a ‘demagogue.'” He referred to Alexander Hamilton and Federalist No. 1 [emphasis ours]:

An over-scrupulous jealousy of danger to the rights of the people, which is more commonly the fault of the head than of the heart, will be represented as mere pretense and artifice, the stale bait for popularity at the expense of the public good. It will be forgotten, on the one hand, that jealousy is the usual concomitant of love, and that the noble enthusiasm of liberty is apt to be infected with a spirit of narrow and illiberal distrust. On the other hand, it will be equally forgotten that the vigor of government is essential to the security of liberty; that, in the contemplation of a sound and well-informed judgment, their interest can never be separated; and that a dangerous ambition more often lurks behind the specious mask of zeal for the rights of the people than under the forbidden appearance of zeal for the firmness and efficiency of government. History will teach us that the former has been found a much more certain road to the introduction of despotism than the latter, and that of those men who have overturned the liberties of republics, the greatest number have begun their career by paying an obsequious court to the people; commencing demagogues, and ending tyrants.

On Monday, the eve of Trump’s second impeachment trial, Trump lawyers said that the move to try the former president in the Senate was just another example of “Trump Derangement Syndrome.”