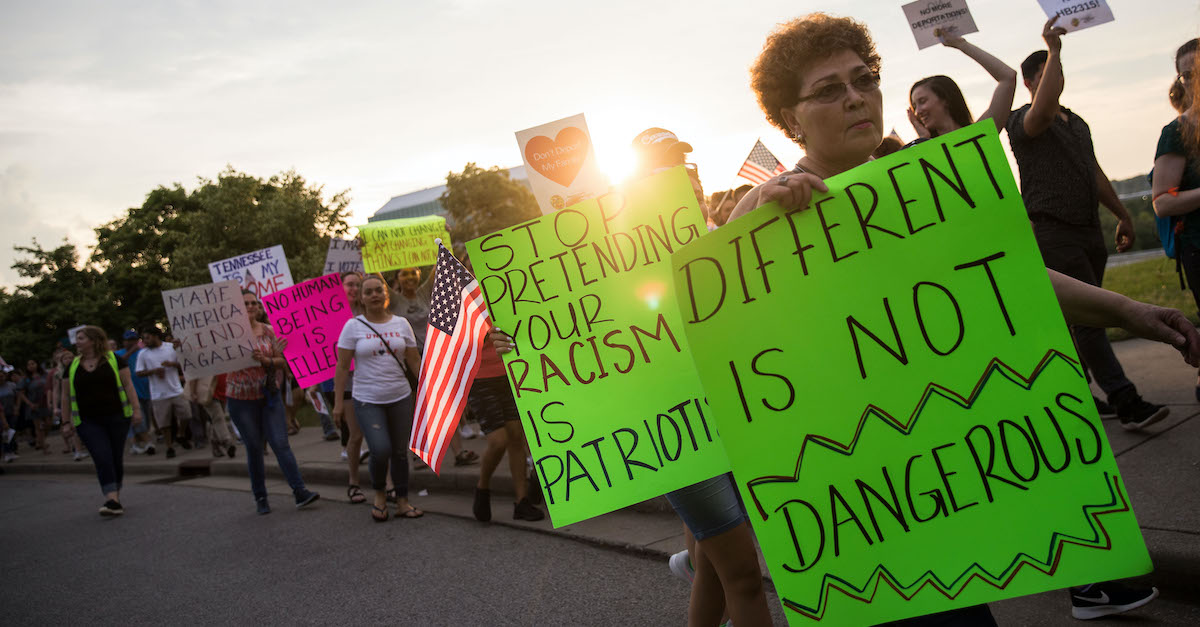 Immigrant families and activists march during a rally outside the Tennessee State Capitol against HB 2315, a bill recently passed as law that will prohibit sanctuary city policies in the state May 31, 2018 in Nashville, Tenn.

Dropping three Trump-era cases over efforts to withhold Justice Department funding from states and cities with pro-immigration policies, the Biden administration asked the Supreme Court to clear so-called sanctuary city petitions from their docket. The high court did so on Thursday night, in a moved hailed by local prosecutors in mostly blue states.

“Local law enforcements’ ability to protect their jurisdictions should never be compromised to push an anti-immigrant agenda,” New York Attorney General Letitia James (D) wrote in a statement. “These grants are critical to our efforts to protect New Yorkers, which is why the former president’s attempts to hold them hostage was so unconscionable. We’re pleased that despite the Trump administration’s attempts to exact revenge on cities and states through vindictive policies and continued litigation that we were able to work with the Biden administration to dismiss this case in the Supreme Court. We look forward to continuing to work with the administration to ensure state and localities never have to choose between protecting their autonomy and protecting the public’s safety.”

A trio of joint stipulations on the Supreme Court’s docket brought an unceremonious end to former President Donald Trump’s crusade against sanctuary jurisdictions, the states and cities opting to limit local cooperation with federal authorities. The Trump administration retaliated against them by preventing them from receiving up to $385 million in justice assistance grants.

Those efforts failed before the First, Third, Seventh and Ninth Circuit Courts of Appeal, but the New York City-based Second Circuit bucked the trend, sparking a furious dissent by U.S. Circuit Judge Raymond Lohier, an Obama appointee who called the decision “astonishing.”

“Until today, every single circuit judge to have considered the questions presented by this appeal has resolved them the same way,” Lohier dissented on July 2020. “That’s twelve judges — including one former Supreme Court justice — appointed by six different presidents, sitting in four separate circuits, representing a remarkable array of views and backgrounds, responsible for roughly forty percent of the United States population, who, when asked whether the Attorney General may impose the challenged conditions, have all said the same thing: No.”

Trump flipped the Second Circuit conservative with an appointment in late 2019.

The circuit split made the controversy ripe for judicial review, and a trio of petitions for a writ of certiorari hit the docket during Trump’s lame-duck session.

In the Second Circuit case, seven states—New York, Connecticut, New Jersey, Washington, Massachusetts, Virginia and Rhode Island—and New York City sued over the restrictions in 2018, winning a ruling from a federal judge in Manhattan ordering the Justice Department to release grants named after late New York City Police Officer Eddie Byrne, who was assassinated in the line of duty in 1988.

The New York City Law Department did not immediately respond to an email requesting comment.