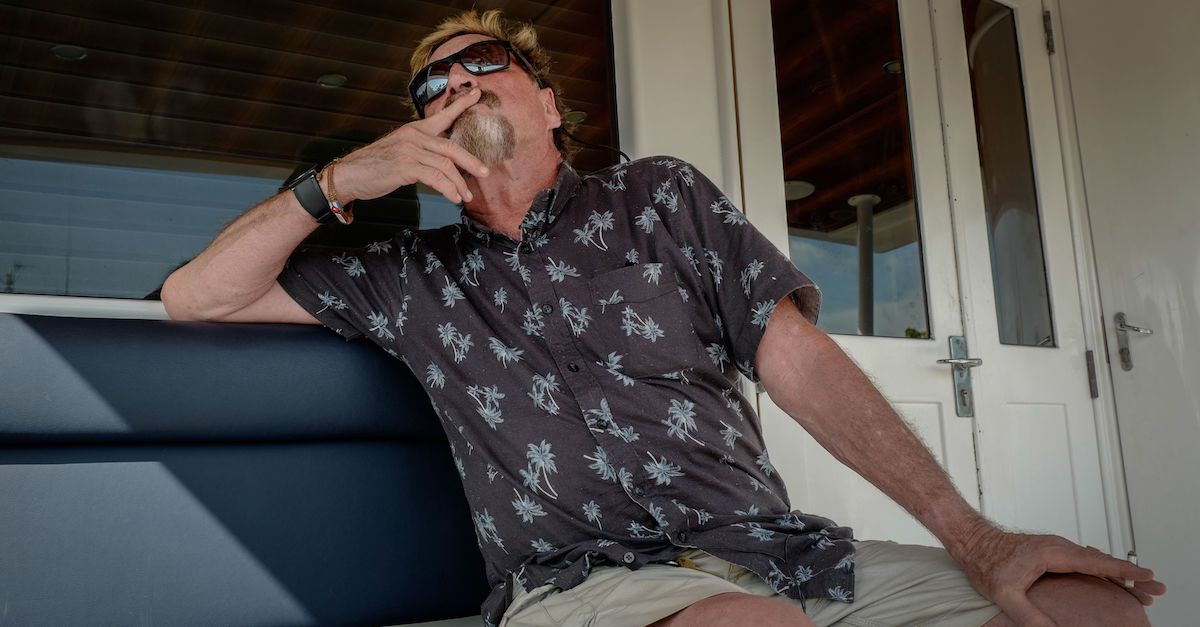 US millionaire John McAfee gestures during an interview with AFP on his yacht anchored at the Marina Hemingway in Havana, on June 26, 2019.

Antivirus software mogul John McAfee, who has been awaiting extradition from Spain on tax evasion charges since late last year, just had his legal woes compounded by federal prosecutors in Manhattan on Friday morning. The 75-year-old computer programmer now also stands accused of a $13 million fraud and money laundering scheme.

Prosecutors claim that McAfee and Jimmy Gale Watson Jr., an executive adviser of his cryptocurrency team, engaged in a “pump-and-dump” scheme known as “scalping,” where they bought large quantities of publicly traded cryptocurrency altcoins at cheap rates to be peddled on social media.

“As alleged, McAfee and Watson exploited a widely used social media platform and enthusiasm among investors in the emerging cryptocurrency market to make millions through lies and deception,” Manhattan U.S. Attorney Audrey Strauss wrote in a statement. “The defendants allegedly used McAfee’s Twitter account to publish messages to hundreds of thousands of his Twitter followers touting various cryptocurrencies through false and misleading statements to conceal their true, self-interested motives. McAfee, Watson, and other members of McAfee’s cryptocurrency team allegedly raked in more than $13 million from investors they victimized with their fraudulent schemes. Investors should be wary of social media endorsements of investment opportunities.”

McAfee now has more than a million followers on his verified Twitter account, where he promoted his altcoins in messages embedded in his criminal complaint. 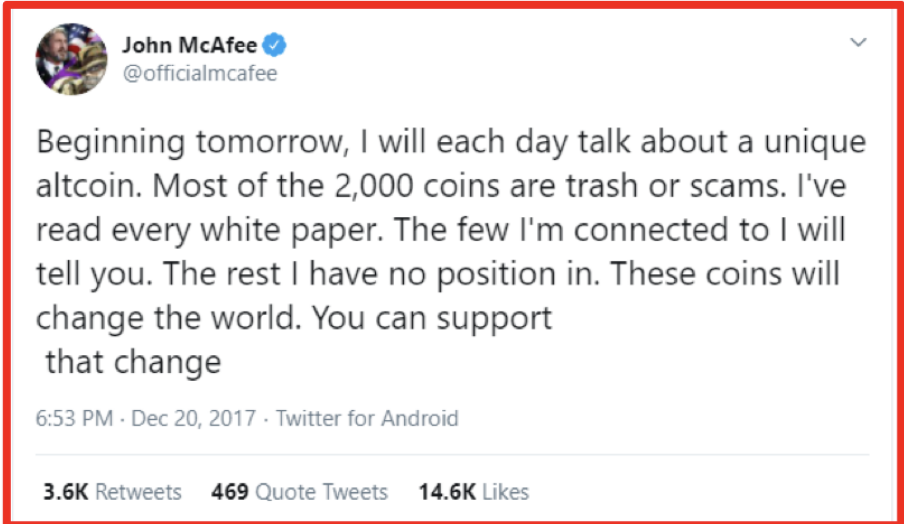 McAfee tweeted those altcoin endorsements on his verified account without disclosing that he owned large quantities of them, even though he falsely promised transparency, prosecutors claim.

Together with other members of his team, McAfee allegedly sold his investment position in that significant short-term price increase that his tweets generated, but the long-term value of the altcoin usually declined significantly in the year following his tweets, according to the complaint.

Prosecutors say that the first time McAfee successfully carried out this scheme happened in mid-December 2017, with an altcoin called Verge (XVG).

On Dec. 21, 2017, an XVG investor pressed McAfee on whether he bought the altcoin before he promoted it, and the antivirus guru falsely denied it, prosecutors says.

“I bought absolutely none at all,” the complaint quotes McAfee as responding. “I could not promote it if I owned it.”

Four days after McAfee allegedly promoted XVG in a tweet and Dec. 13, 2017, the market price of the tokens spiked by more than 500%, according to the complaint.

Watson, 40, was arrested on Thursday night in Texas and will be presented before a federal judge there on Friday.

Read their indictment and McAfee’s criminal complaint below: