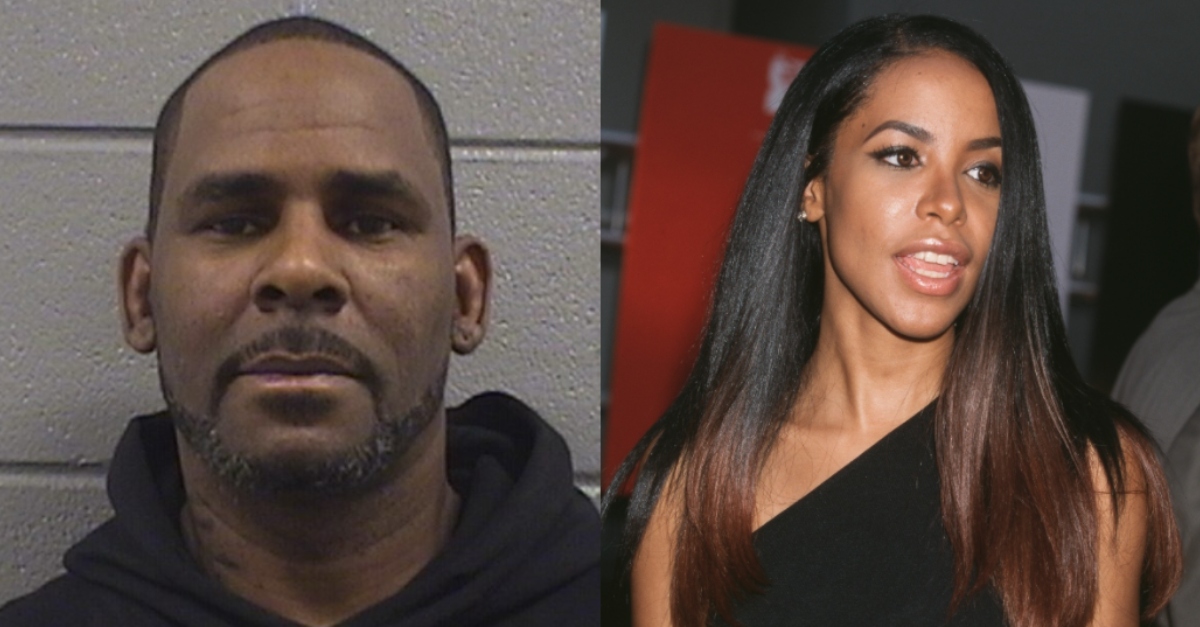 Another woman who claims R. Kelly sexually abused her as a teenager reportedly testified on Monday that she walked in on the singer performing oral sex on beloved R&B songstress Aaliyah Dana Haughton.

Prosecutors brought out the testimony among a parade of witnesses alleging that the embattled entertainer was a prolific abuser of women and girls as well as a boy. This testimony also covers some of the scope of Kelly’s relationship with the now-deceased Aaliyah, whom prosecutors say he married when she was age 15 to benefit from spousal privilege. The singer believed she got pregnant when she was a minor and wanted to avoid potentially incriminatory testimony, prosecutors say.

“I saw Robert and Aaliyah in a sexual situation,” said the “Jane Doe” woman testifying under the name Angela, according to Vulture. “It appeared that he had his head in between her legs and was giving her oral sex.”

The stories about Angela and Aaliyah fit the alleged pattern of how Kelly treated women. The defendant allegedly used his status as a popular singer to prey on others, not just sexually abusing them, but in many cases, micromanaging their lives.

“The defendant quickly learned that he could take advantage of his access—and he did,” said Assistant U.S. Attorney Maria Cruz Melendez in opening statements on Aug. 18.

The defense maintains that prosecutors are overreaching with charges including racketeering, and they have been attempting to undermine the testimony from alleged victims.

“After all, the RICO ‘Enterprise’ is based on a series of independent relationships and events that the government is trying to patch together like different types of fabrics and trying to pass it off as silk,” said attorney Thomas Farinella in a press statement.

Angela testified that she met Aaliyah in 1992 at Aaliyah’s 13th birthday. Kelly introduced them, she said. Aaliyah joined the tour but did not perform, instead learning about life on the road as Kelly’s protégée, according to this story.

Angela said she walked in on the oral sex incident on the tour bus, when planning to prank Kelly by throwing throwing water on him. Instead, she immediately backed out on seeing the abuse.

“I closed the door abruptly and pushed the girl behind me away from the door,” she reportedly said.

Angela said she personally met Kelly in 1991 when she was 14 or 15, saying a friend of hers brought her to a party at Kelly’s Chicago apartment, where Kelly had sex with her. She ended up being a backup dancer on one of his tours, saying she dropped out of high school when Kelly told her she could not both sing or go to school.