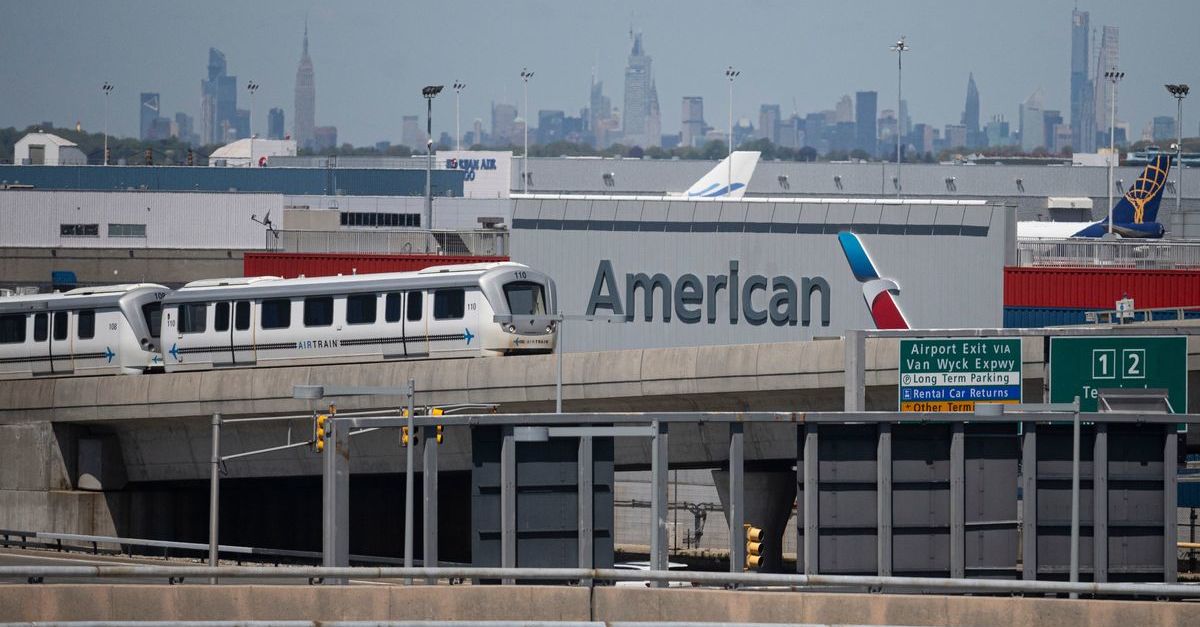 The American Airlines logo is seen at John F. Kennedy Airport (JFK) is seen amid the novel coronavirus pandemic on May 13, 2020 in Queens, New York.

A 28-year-old woman was arrested Sunday after allegedly assaulting and intimidating a flight attendant during an American Airlines flight from Miami to New York City.

U.S. Department of Homeland Security (DHS) Officer Anthony Apath alleged in a four-page criminal complaint that Chenasia Campbell “began yelling at [a] flight attendant for not picking up her garbage” roughly midway between the flight from Florida to New York.

The shouting incident, which occurred in the crew area of the plane, allegedly prompted a second flight attendant to intervene.

The situation, briefly defused, then allegedly got even worse.

After a denied request to land the plane, Campbell was placed “in hand restraints for the remainder of the flight” by an off-duty member of the NYPD, according to the filing.

Upon landing at JFK International Airport, Campbell was arrested where she remained through her arraignment on Monday afternoon.

During the placid court proceedings, the government and the defense hashed out a few bond issues with pretrial services.

Campbell said she understood the charges and that she spoke with her attorney about the allegations against her while waiving her right to an in-person appearance before the court due to the pandemic.

Defense attorney James Darrow, with the Federal Defenders of New York, also waived a mandatory 30-day hearing “in light of the agreed upon bail package.”

U.S. Magistrate Judge Peggy Kuo oversaw the arraignment and calmly walked Campbell and her mother through the motions.

Chermayne Campbell agreed to serve as the surety on her daughter’s bond and could pay $15,000 if any violations occur.

The defendant was granted release on a $15,000 surety bond. Her travel is limited to New York City and Long Island. She’ll be subject to random visits from pretrial services. Since her passport is currently lost, she’s not allowed to apply for a new one. And if she comes across her current passport, she’s supposed to turn it in.

The pretrial services representative also asked for Campbell to be subject to a regime of random drug testing and a mental health evaluation, for her to report to pretrial services as directed, to have no contact with the victim or potential witnesses and to abide by any relevant orders of protection.

None of the conditions were particularly controversial and the defense only disputed a practical issue related to the representative’s request for a mental health evaluation.

Darrow said his client is already enrolled in a mental health treatment program pursuant to a current case that’s ongoing. Judge Kuo noted that should be sufficient if pretrial services didn’t have any concerns. The representative said they didn’t need to assign Campbell to a different program but wanted the condition imposed just in case the extant program is not appropriate. Pretrial services added that they didn’t want to duplicate but wanted the ability to make a referral.

A minor bit of drama unfolded as the defendant was asked to verify her knowledge and understanding of the day’s digital proceedings.

“Yes,” Campbell said, saying she understood. When asked if she agreed, the defendant said “Sure,” prompting some concern from the court.

“I want to be sure you really mean it. You’re saying it like ‘whatever.'”

The defendant affirmed that she understood what was going on as the judge reiterated a few of the bail conditions. This brief flareup led the defense to quickly speak up on the client’s behalf and say that she wasn’t trying to give the judge’s concerns short shrift.

“I think she is genuinely hearing and understands,” Darrow explained, adding that Campbell may have come off as responding tersely because she’s currently in a holding cell where she’s been for several hours and she is worried about and thinking about her three children.

“I was just explaining why she was in some distress right now,” the defense attorney continued. “She’s trying to keep it together.”

Technically, Campbell faces a maximum 20 years in prison upon conviction (whatever happens, do not expect a potential punishment that severe to be handed down).