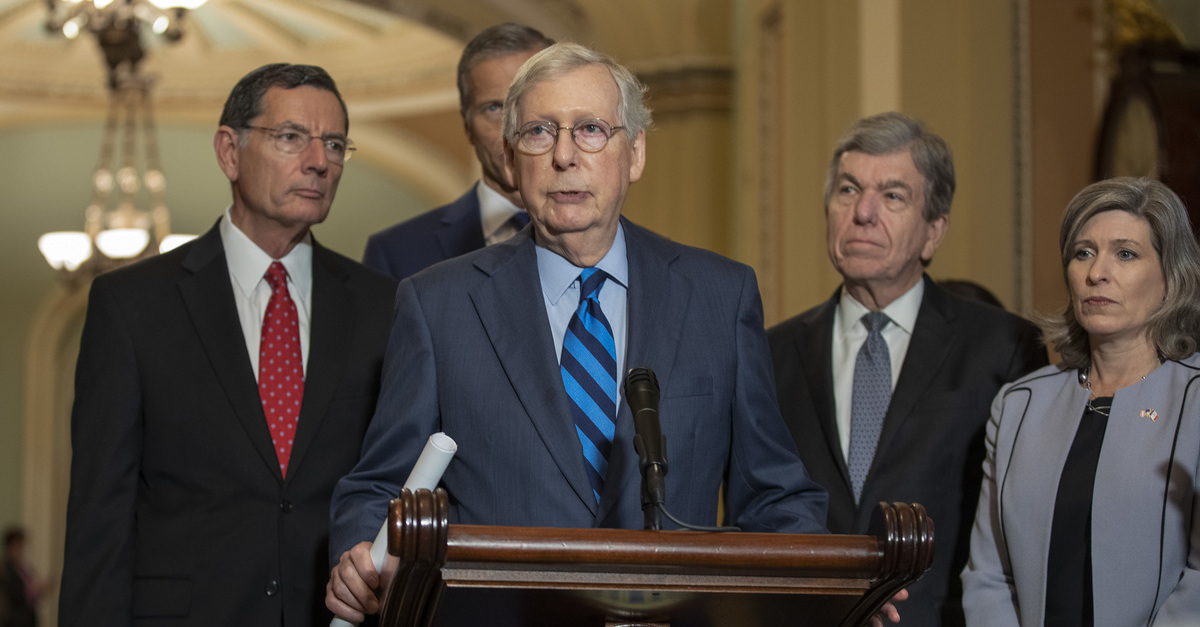 Senate Majority Leader Mitch McConnell (R-Ky.) spent his lunch on Wednesday explaining to Republican colleagues how he thought an impeachment trial in the Senate would work should President Donald Trump actually be impeached by the House of Representatives.

According to CNN’s Lauren Fox, a potential trial under McConnell’s current plans would be held six days a week–not including Sundays–and there would be no socializing allowed on the Senate floor.

And that’s not all. According to CBS News’s Mark Knoller, Senators wouldn’t even be allowed to speak during the trial, “which would be good therapy for a number of them,” the GOP leader said.

McConnell previously addressed what he would do if the House were to hypothetically pass articles of impeachment against Trump.

President Trump’s supporters slammed McConnell’s response as lacking in both political foresight and fealty to the 45th president.

Tom Fitton is the president of conservative government watchdog group Judicial Watch. In a recent interview with Fox News’ Jeanine Pirro, Fitton said McConnell should implement the so-called “nuclear option” and change Senate rules to stymie an impeachment trial in the Senate before it even starts.

“The Senate is going to have to try any impeachment,” Fitton said. “And if I were the Senate Majority Leader, I’d tell the House, ‘This is dead on arrival, we’re changing the rules, we are going to kill it before it even gets out of the cradle. And we’re not going to follow up with impeachment trial. We’re not required to under the Constitution. We see the corruption here. We’re not going to buy into and play your game and ratify your abusive power by further harassing the president with an unnecessary impeachment trial.’ They should throw the charges out like a judge would if the prosecution was corrupt.”

Democrats, on the other hand, tend to think McConnell’s already got the daggers out for fair process in the Senate should President Trump be charged with ‘High Crimes and Misdemeanors’ in the House.

Steve Benen is the producer for MSNBC’s The Rachel Maddow Show. In an early October post on the show’s website, Benen cited a recent Facebook post by McConnell to declare that the Kentucky Republican “wants his supporters to know the fix is in.”

So, what does McConnell’s recent lunch and press conference mean?

Potentially a lot and fast.

According to Politico, McConnell expects House Speaker Nancy Pelosi (D-Calif.) to bring formal charges of impeachment against Trump by the Thanksgiving holiday and he further anticipates the entire episode could be dealt with and shelved by Christmas Day.

“He thinks Democrats are of the same mind: let’s not drag this out for five weeks,” an anonymous source who attended the GOP lunch said.

Most of Wednesday’s discussion reportedly focused on minutiae of Senate parliamentary procedure in the event of an impeachment trial.

McConnell also is said to have noted the power that Supreme Court Chief Justice John Roberts would have during any such proceedings. The chief justice presides over any impeachment trial of a sitting president per Article I, section 3 of the U.S. Constitution.

And who would talk absent 100 silent U.S. Senators? Only the House’s impeachment managers, the president’s legal team and Chief Justice Roberts, according to the plan outlined by McConnell.

Law&Crime Network host and former N.J. prosecutor Bob Bianchi said he was “cautiously optimistic, but also skeptical given the chicanery” he has “witnessed these past few years.”

Bianchi said there were negatives and positives going forward:

On one hand, I am glad that McConnell is even having a trial and not shelving it with some parliamentary trick like he did with Merrick Garland’s SCOTUS nomination and in effect scuttling the trial. On the other hand, I am not confident some significant procedural obfuscation isn’t lobbed in like a bomb, and thereby making the ”trial” a joke.

“As proposed, the six days a week and ending it quickly seems reasonable to me given the fact pattern here,” Bianchi said via email. “It’s simple, and not hard to present. And, I know the Democrats will not want something elongated as they want to get back to campaigning.”

The upshot of all this: Trump’s staunch supporters either haven’t held McConnell’s ear or McConnell simply can’t muster enough support within his own caucus for the nuclear option.

“The Majority Leader appears to be taking seriously the idea that any articles of impeachment that emerge from the House will be significant enough to warrant a full review and trial by the Senate,” Moss also told Law&Crime via email.

“I suspect this means McConnell doesn’t think he’ll have 51 votes to dismiss,” he said.