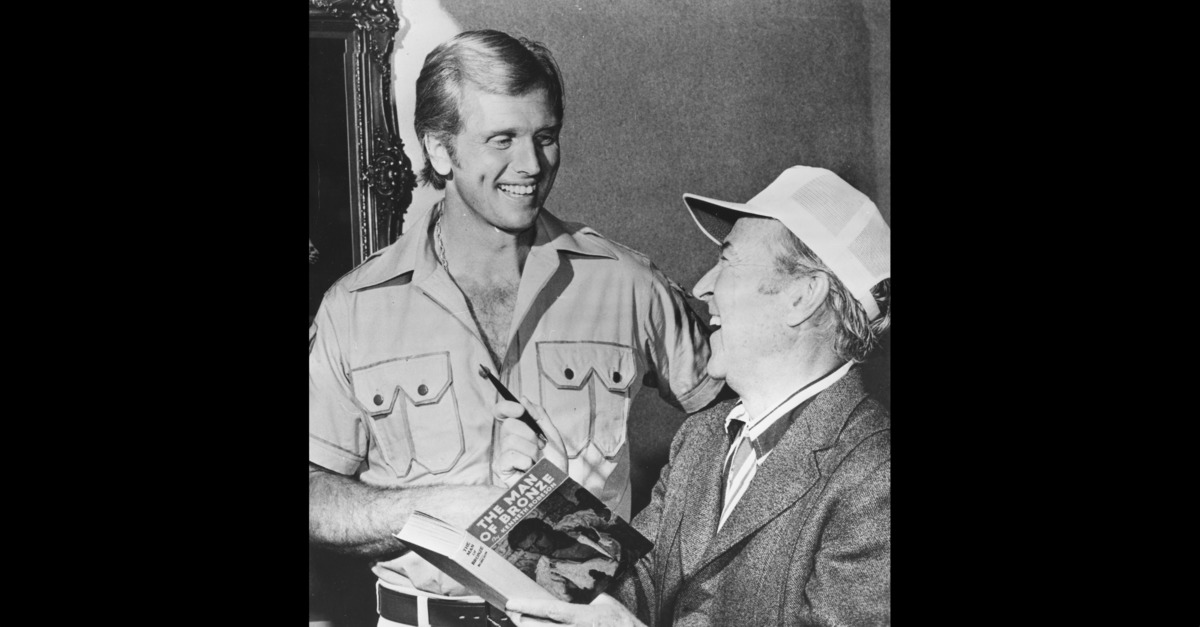 Actor Ron Ely discussing his role on the film ‘Doc Savage: The Man of Bronze’ with producer George Pal, Hollywood, CA, circa 1975.

HOPE RANCH, CALIFORNIA — “Tarzan” actor Ron Ely‘s wife was stabbed to death by the couple’s son who was then killed by police.

The two deaths–of 62-year-old Valerie Lundeen Ely and 30-year-old Cameron Ely–occurred on Tuesday evening in the small Southern California suburb of Hope Ranch just outside Santa Barbara, according to a wire report by the Associated Press.

A Santa Barbara County Sheriff’s Office statement Wednesday said that a 911 call just after 8 p.m. was made which reported a family disturbance. Deputies arriving on the scene say they found a woman, later identified as Valerie, who was the victim of an apparent homicide due to multiple stab wounds.

Valerie was found inside the home and authorities say they quickly ascertained the suspect to be the Elys’ son, Cameron.

“Deputies searched the residence and surrounding area for Cameron Ely,” the statement reads. “During the search, the suspect was located outside the home. He posed a threat and in response [four] deputies fired their service weapons at the suspect, fatally wounding him. No deputies were injured during the confrontation with the suspect.”

The Sheriff’s Office also released a lengthier write up of the shooting in an earlier press statement posted on the department’s website:

Deputies immediately searched the home and secured a perimeter of the surrounding area. A shelter-in-place alert was sent to area residents advising them to remain in their homes as deputies searched for the homicide suspect. During the search, deputies located the suspect on the property of the homicide. Deputies attempted to gain verbal control of the suspect, however he presented a threat to them. In defense of the threat posed by the suspect, several deputies fired their service weapons at the suspect, fatally wounding him.

“A disabled elderly male resident of the home was also located and transported to an area hospital for evaluation,” that earlier statement noted.

The elderly man in question is believed to be the 81-year-old “Tarzan” actor who starred in a television adaptation of the popular franchise throughout the 1960s.

Authorities have yet to speculate on a potential motive for the tragic slaying.