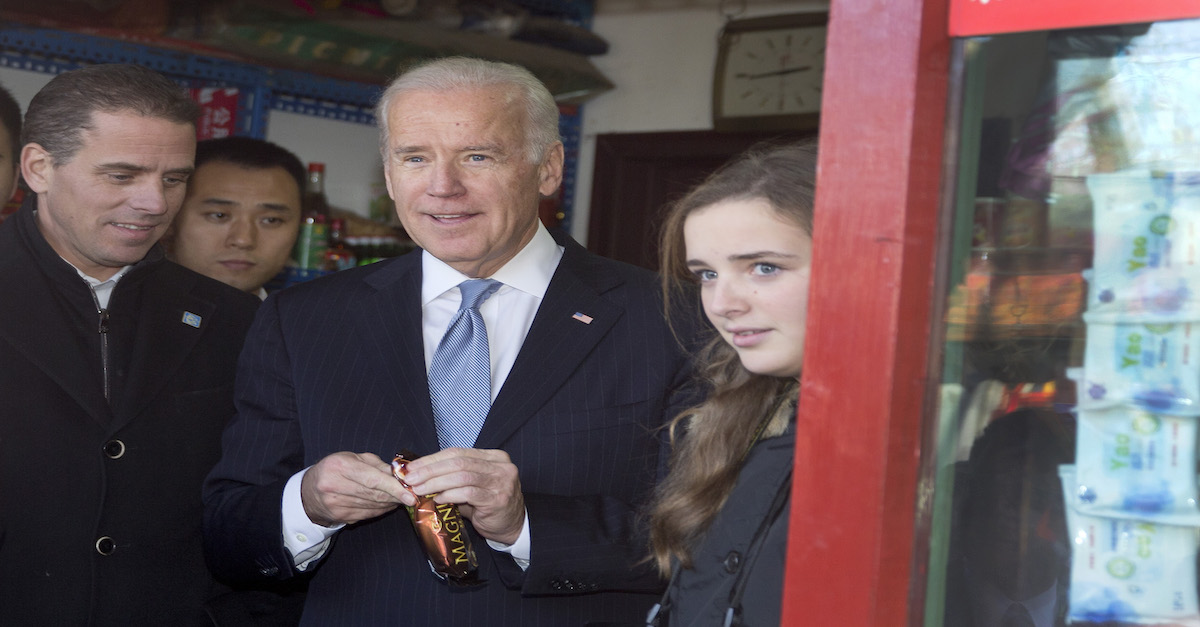 US Vice President Joe Biden (C) buys an ice-cream at a shop as he tours a Hutong alley with his granddaughter Finnegan Biden (R) and son Hunter Biden (L) in Beijing on December 5, 2013. Biden said on December 5 China’s air zone had caused “significant apprehension” and Beijing needed to reduce Asia-Pacific tensions to protect its growing stake in regional peace and stability.

Former Vice President Joe Biden has been under the microscope ever since the resurfacing of a story that Biden bragged about getting a Ukrainian prosecutor fired. The story picked up steam because the prosecutor was reportedly investigating the largest gas company in the country, and Biden’s son just happened to be on its board.

Ukraine’s Prosecutor General said Thursday, however, that there is no evidence that the 2020 Democratic presidential candidate or his son Hunter Biden broke any Ukrainian laws in relation to the previous prosecutor general’s investigation of Burisma Group.

“I do not want Ukraine to again be the subject of U.S. presidential elections,” Yuriy Lutsenko said in an interview with Bloomberg. “Hunter Biden did not violate any Ukrainian laws — at least as of now, we do not see any wrongdoing. A company can pay however much it wants to its board.”

He said if there is a tax problem, it’s not in Ukraine. Per Bloomberg:

Yuriy Lutsenko, the current prosecutor general, said that neither Hunter Biden nor Burisma were now the focus of an investigation. He added, however, that he was planning to offer details to U.S. Attorney General William Barr about Burisma board payments so American authorities could check whether Hunter Biden paid U.S. taxes on the income.

In March 2016, Biden told Ukrainian President Petro Poroshenko that unless then Prosecutor General Viktor Shokin was fired the Obama Administration would rescind $1 billion in U.S loan guarantees. The U.S. and the International Monetary Fund thought that Shokin should have been doing more to fight corruption.

Biden detailed his attempt to have Shokin fired at a Council on Foreign Relations event in January 2018:

Biden also responded to Trump attorney Rudy Giuliani’s attempts to find dirt on him. Giuliani planned a trip to Ukraine in which he was hoping to find evidence that the former vice president did anything illegal when he pushed the firing of Shokin.

“I can’t remember any lawyer representing the president, conferring with the president, deciding to go overseas, where a government relies on U.S. largesse to try to get them to do something that everybody knows never happened,” Biden said.