U.S. Soldier Charged for Conspiring with Nazi-Satanists to Murder Fellow Troops — Here Are the 10 Craziest Details 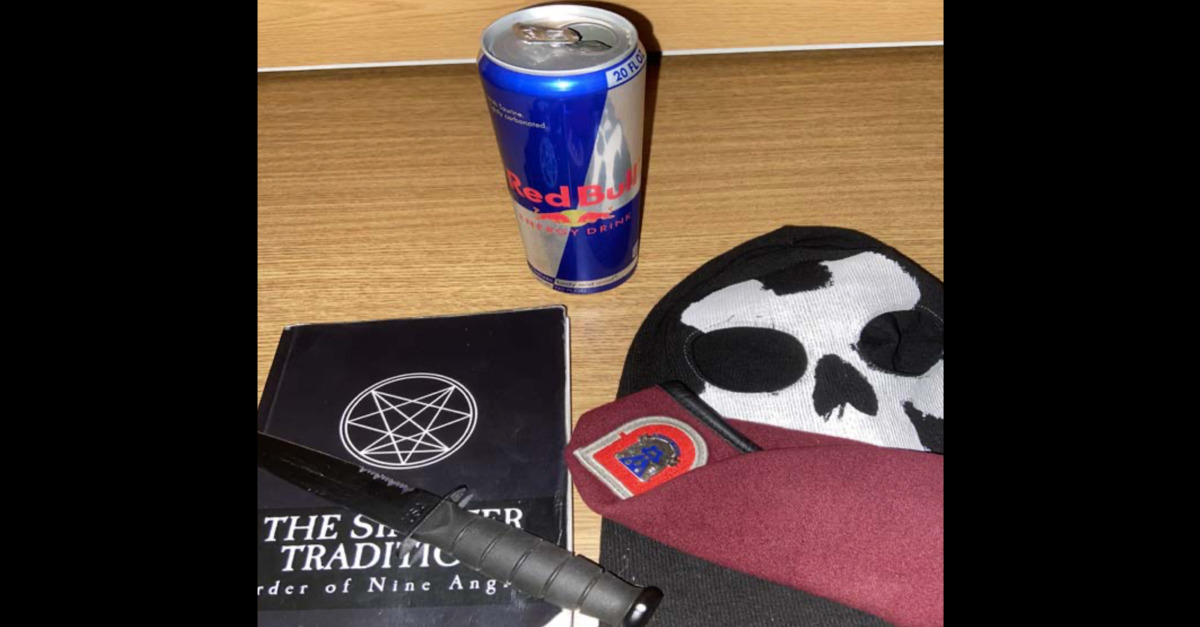 If you had “Satanic neo-Nazis plotting a mass casualty event aimed at the troops based on intelligence received from one such troop” then go ahead and mark that on your 2020 bingo cards.

A member of the U.S. Army as of 2018, Melzer allegedly joined up with the Order of the Nine Angles (O9A), which federal prosecutors describe as “an occult-based neo-Nazi and racially motivated violent extremist group” sometime in 2019.

He appears to have been caught after sharing details via an “encrypted messaging application” in a group chat called “RapeWaffen,” a misogynistic reference to the Nazi Party’s paramilitary Schutzstaffel (SS) Waffen-SS branch–and after plotting with a government informant.

The charging documents get way more bizarre and macabre from there.

1. Melzer was allegedly planning for a “new war.”

Also known as Etil Reggad, Melzer hoped his “military training, survival, [and] links to other groups” could be used to aid and abet an attack that would launch another military conflagration.

On or about May 23, 2020, Melzer sent electronic communications to participants in an o9A-related chat group, in which Melzer wrote, in substance and in part, that he was “risking [his] literal free life” by disclosing information regarding his unit’s deployment and was “expecting results”; that his “life would be absolutely meaningless in the amount of shit it [i.e., the attack] would cause”; that the attack would cause a “new war”; and that the attack would result in “mascal,” which another participant explained meant mass casualty.”

2. Melzer allegedly wanted al Qaeda to carry out the attack.

Acknowledging that he would likely be killed, Melzer told members of an encrypted group chat that he hoped the intelligence he provided to his fellow O9A members and a “purported member of al Qaeda” would precipitate a “jihadi attack” that would result in an additional and new 10-year-long engagement for U.S. forces in the Middle East that “would definitely leave a mark,” according to prosecutors.

“[W]ho gives a fuck,” Melzer allegedly mused about his own life, “it would be another war…I would’ve died successfully.”

Melzer was originally stationed abroad in Europe and then scheduled to be deployed to Turkey in order to “guard a U.S. military installation,” according to the indictment.

Between on or about May 24 and May 25, 2020, Melzer sent electronic messages with specific information about his unit’s anticipated deployment, including, among other things, the number of soldiers who would be traveling, the location of the facility to which Melzer expected the unit to be deployed, and information about the facility’s surveillance and defensive capabilities. Melzer also promised to provide additional information after he deployed in order to try to maximize the likelihood of a successful attack on his unit.

Far from idle threats and encrypted bluster influenced by the likes of Adolf Hitler and Osama bin Laden, O9A members apparently did kill at least one person, according to the indictment. And, prosecutors allege, Melzer was engaged in the conspiracy that led to said death.

[T]he defendant, and others known and unknown, would and did kill an officer and employee of the United States,” the indictment reads. Clarifying that this killing amounts to “murder” under federal law, the incident allegedly occurred “while such officer and employee was engaged in and on account of the performance of official duties.”

5. Melzer is allegedly an avowed “traitor” to his country.

According to the government, Melzer “confessed to his role in plotting an attack on his unit, admitted that he intended for the planned attack to result in the deaths of as many of his fellow service members as possible, and declared himself to be a traitor against the United States whose conduct was tantamount to treason.”

6. Melzer allegedly worried about getting caught.

On or about April 19, 2020, Melzer and another user of the Messaging Application affiliated with O9A and the RapeWaffen Division discussed the arrest of a U.S. service member affiliated with a neo-Nazi group. Melzer wrote,“don’t want to end up like that faggot from who got caught while he was in the military…bad shit” and “still i have to be careful as fuck just because i feel like shit would be harsher considering my current circumstances.”

7. The attack was allegedly going to take place in Turkey.

On or about May 17, 2020, CC-1 asked Melzer through a direct message if Melzer had deployed to Turkey yet, as another co-conspirator (“CC-2”) “needs to know, [CC-2] has plans inshallah my brother, allahu akbar.” Melzer responded “Fuck yea” and provided CC-1 with the scheduled date of the Unit’s departure to Turkey. Later in the conversation, CC-1 asked MELZER, “are we literally organizing a jihadi attack,” to which MELZER responded, “[Y]es probably…As long as I get the info I need to give you all.” When CC-1 then raised the possibility of MELZER “get[ting] shot,” MELZER responded “Who gives a fuck…The after effects of a convoy getting attacked would cover it…It would be another war…I would’ve died successfully…Cause if another 10 year war in the Middle East would definitely leave a mark.”

On or about May 23, 2020, Melzer sent a message in the Order of the 9 Rapes Chat in which he wrote “I mean if you know some kinder weird Italian groups that would be willing to do something to stir something up I wouldn’t mind.”The CS responded “stir something up with what?” and “I’m confused you said you were in Turkey in the military.” Melzer wrote that he was a member of the U.S. military, who was “stationed in Vicenza,” and that he was “[g]oing to Turkey for a deployment.”

9. Melzer allegedly bragged about having friends in the Islamic State.

Melzer wrote that he “[u]sed to be coolwith a couple IS members who lived in France” and that “3 ofthem are dead now and the last 2 I’ve lost contact with lately.” Based on my training, experience, and participation in thisinvestigation, I believe that when Melzer wrote “a couple IS members,” he was referring to members of ISIS.

10. Melzer allegedly had a short temper and got angry in the chats.

After the [confidential source] asked what he meant by“stirring up,” Melzer responded “Ok let me be as direct aspossible” and then wrote “IF YOU KNOW ANYONE IN TURKEY TELL THEMTHIS INFO there.” After the CS asked Melzer what information hewas referring to, MELZER replied “[t]hat you know that there isa convoy coming through Turkey soon and date and time will begiven soon. Goddamn.” Based on my participation in this investigation, I believe that the “convoy” to which Melzer was referring was his Unit.