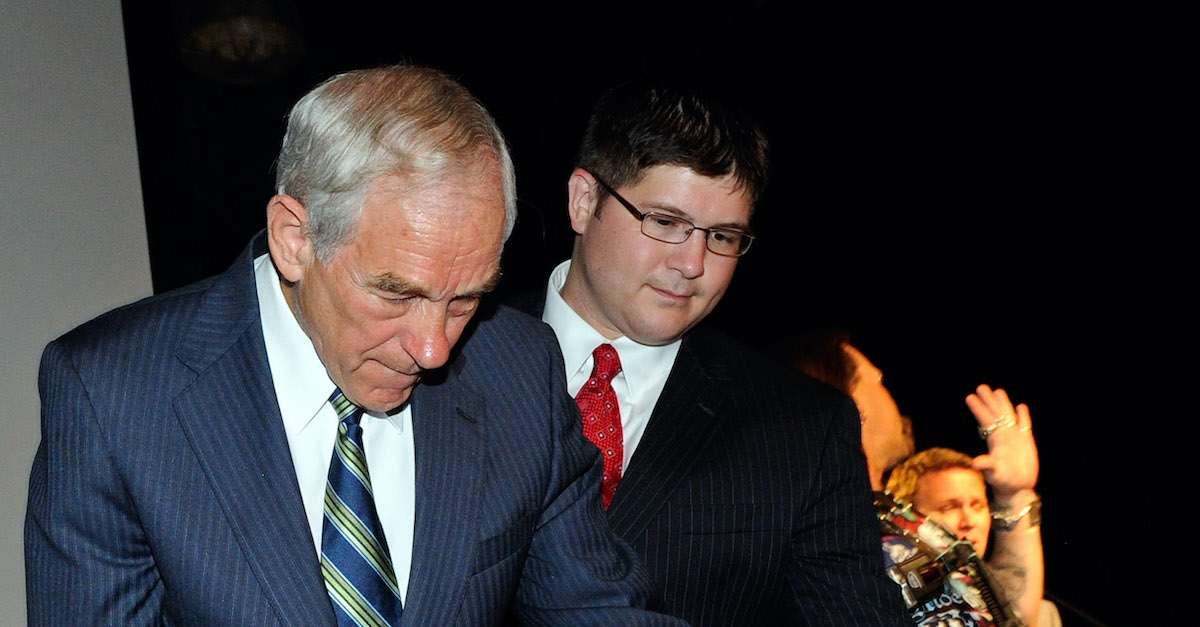 At a political gathering in 2011, then-Rep. Ron Paul (R-Texas) stands next to his top aide Jesse Benton, who was pardoned by outgoing President Donald Trump on Wednesday at the request of Senator Rand Paul (R-Ky.). Benton was convicted of hiding payments in an alleged bribery-for-endorsement scheme for the elder Paul.

Two Republican political operatives — including the recipient of an eleventh-hour pardon from former President Donald Trump — have been charged by a grand jury with conspiring to solicit an illegal campaign contribution from a Russian national for Trump’s 2016 campaign.

Prosecutors claim that the operatives “concealed” their contribution to a pro-Trump committee, causing that entity to “unwittingly” file a false report with the Federal Election Committee.

A former chief strategist for the pro-Trump super PAC Great America, Jesse Benton received a pardon from the former president in late December  for his felony conviction in a bribery-for-endorsement conspiracy related to the quixotic 2012 presidential campaign of Rep. Ron Paul (R-Texas). Sen. Rand Paul (R-Ky.), a Trump ally and son of the erstwhile Texas Republican congressman, supported Benton’s pardon in the waning days of the Trump administration.

According to the indictment, 43-year-old Benton and his co-defendant Roy Douglas “Doug” Wead, 75, helped funnel a $25,000 campaign contribution from an as-yet-unnamed Russian national to the Trump campaign in 2016.

Though the 19-page indictment does not identify Trump by name, court papers detail an alleged scheme to secure a face-to-face meeting between the foreign national and the then-candidate at a Philadelphia campaign event on Sept. 22, 2016.

On that date, Wead and two foreign nationals attended the event, and Wead took a photograph of the Russian national with the candidate with a personal camera.

Prosecutors allege that the duo conspired to funnel the foreign national’s money through a straw donor, using a mangling of Benton’s surname as “Jesse Bentor.” That name pulls up two contributions on FEC records: One contribution is a maximum $2,700 donation to Trump’s political campaign, and the other is a $25,000 to Trump Victory, the joint fundraising committee.

Wead and Benton allegedly solicited and received a $100,000 donation from the foreign national and submitted the $25,000 to the committee, the indictment states.

Prosecutors claim that the duo then “concealed, covered up, falsified, and made a false entry” that caused the committee to “unwittingly, falsely record” that Benton was the contributor.

According to Politico, two of Trump’s former attorneys, Jay Sekulow and Jane Raskin, represented Wead, a conservative author and activist, at a court hearing on Monday.

“Doug Wead is a respected author and supporter of charitable causes,” Sekulow told Politico. “He has pleaded not guilty to the charges and will continue to respond appropriately in court.”

Both men appeared on Monday before U.S. Magistrate Judge Zia Faruqui. The case reportedly has been assigned to U.S. District Judge Trevor McFadden, a Trump appointee.

Their six-count indictment alleges charges of conspiracy, contributions by foreign nationals, contributions in the name of another, and false entry in the record.