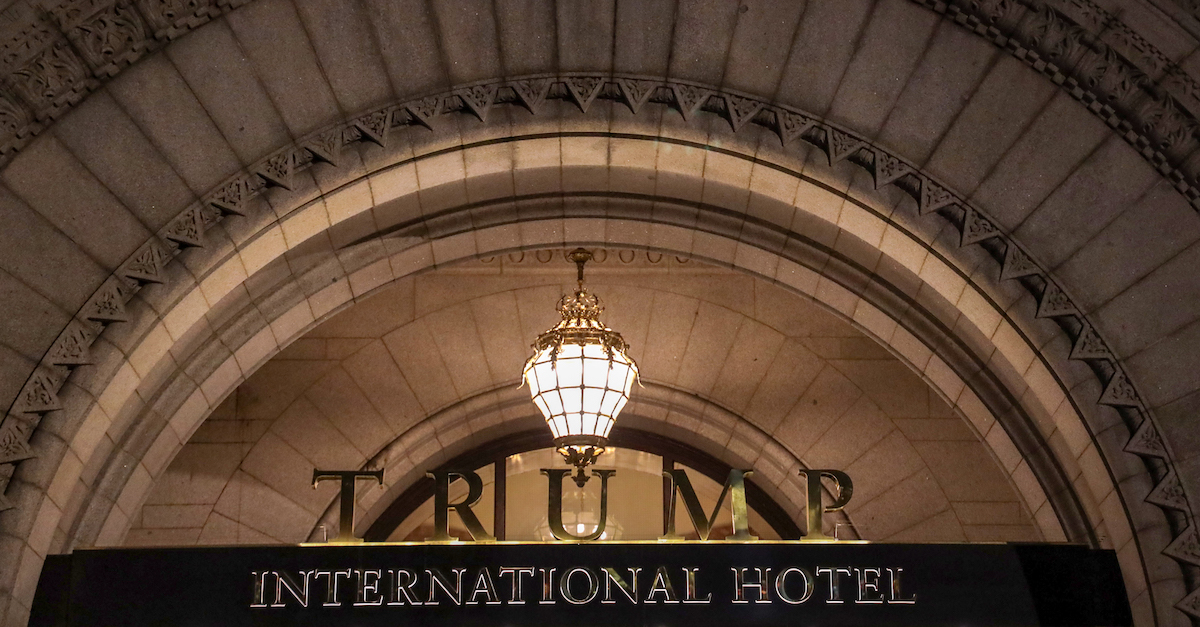 The United States Court of Appeals for the Fourth Circuit dismissed the Washington, D.C. and Maryland emoluments case against President Donald Trump on Wednesday. In the lawsuit, Trump was accused of profiting off foreign and state government visitors at his Washington hotel, in violation of the Constitution. The three-judge panel, consisting of Judges Paul V. Niemeyer, Dennis W. Shedd, and A. Marvin Quattlebaum Jr., unanimously agreed that the plaintiffs–state attorneys general–lacked legal standing to sue the Trump Administration.

Now inquiring minds want to know: if these state attorneys general can’t sue over an alleged violation of the Constitution, who can?

Maryland is one of the original ratifiers of the Constitution.
Is federalism a one way street?
Federal law preempts state law but a state can’t sue a president for violating the Constitution? Even when it harms that state’s businesses?
On to SCOTUS.https://t.co/6C4EnjiMuT

Some warned that this was going to happen.

CA4 rejection of emoluments claims for lack of standing should not be a surprise. Some of us said this was a major problem with these suits all along.

Others wondered if anyone could have standing on this issue.

It’s possible that nobody would have standing. (There’s still a live case in D.C., but the government has sought mandamus in the D.C. Circuit over the standing issue in that case too.)

According to U.S. law, a plaintiff has standing if there is a demonstrated “injury in fact,” meaning that the injury is of a legally protected interest which is (a) concrete and particularized and (b) actual or imminent. In plain English, the court’s decision ultimately hinged upon whether or not Trump’s businesses clearly harm D.C. and Maryland by diverting business from similar properties.

During the case, Trump’s attorneys appealed a ruling from a District Court judge in Maryland who allowed the case to move forward on this exact issue. More specifically, they argued that the judge used a particularly loose definition of “emoluments” in his decision.

To this point, Niemeyer wrote in his opinion, “The District and Maryland’s interest in enforcing the Emoluments Clauses is so attenuated and abstract that their prosecution of this case readily provokes the question of whether this action against the President is an appropriate use of the courts.”

Here are the DC and MD AGs on today’s 4th Circuit ruling dismissing their emoluments lawsuit against Trump: “We have not and will not abandon our efforts to hold President Trump accountable for violating the Nation’s original anti-corruption laws.” https://t.co/ugk3Jzxvni pic.twitter.com/7KNBBwbx7s

The attorneys general strongly disagreed with the court’s decision saying, “Although the court described a litany of ways in which this case is unique, it failed to acknowledge the most extraordinary circumstance of all: President Trump is brazenly profiting from the Office of the President in ways that no other President in history ever imagined and that the founders expressly sought—in the Constitution to prohibit.”

After some discussion about the ruling, some came away thinking the emoluments clause is little more than an addendum to the articles of impeachment.

So in other words, under this theory the emoluments clause is effectively an annex to the impeachment article, since it sounds like that’s the only mechanism where it could be enforced.

If they intend on continuing their case, the attorneys could petition the court for an en banc (full court) review or appeal to the Supreme Court. Whether or not they are considering pursuing these options is not clear at this time.

Aside from the obvious victory, Trump’s attorneys also successfully blocked an order from U.S. District Court Judge Peter J. Messitte of Maryland, which authorized subpoenas for several of Trump’s business secrets, including which foreign governments have paid the Trump Organization.

President Trump took to Twitter to celebrate his victory, calling the case a “big part of the Deep State and Democrat induced Witch Hunt.” His lawyer Jay Sekulow also celebrated the ruling.

Jay Sekulow calls 4th Circuit emoluments ruling a “complete victory,” for Trump. “The decision states that there was no legal standing to bring this lawsuit in the first place. This latest effort at Presidential harassment has been dismissed with prejudice,” he adds. pic.twitter.com/rKNihdGSY5